September 6-7 Incidents are one of the gravest lynching attempts in the history of Turkey that took place in 1955. The incidents that took place primarily in Istanbul and Izmir were a campaign of violence, a riot targeting non-Muslim Turkish citizens. The incidents also spread to Ankara, Bursa, Samsun, Adana and Eskisehir, but they were contained and only remained as protests and demonstrations.
SHARE ON TWITTER SHARE ON FACEBOOK
September 6, 2019 4194 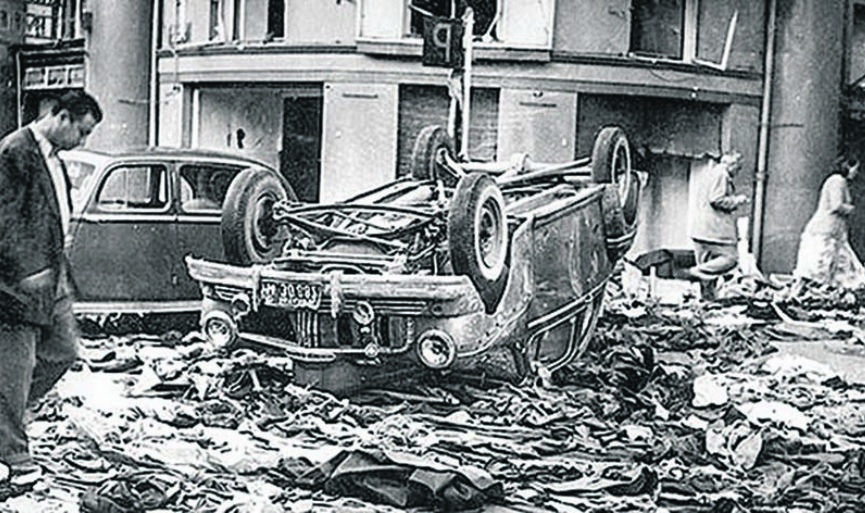 The incidents that were planned by DP- the ruling party of that period- in collaboration with secret service and the party’s local organizations were led by student and youth associations, unions and “Cyprus is Turkish Association” that were encouraged by the government. The agitation that was triggered by the long-standing Cyprus issue came in handy and through a lie, people who were already incited were provoked resulting in masses pouring into streets. [i]. This lie, this fake news was about a bombing targeting Ataturk’s house in Thessaloniki.

On the night of September 5, a blast bomb explodes in Thessaloniki near the garden of Ataturk’s house. According to Greece, the incident is planned by the Turkish government. The Greek authorities press charges against the people who brought and detonated the blast bomb at the crime scene- the garden, which was also used by Consul General of Turkey- along with the people who instigated the crime. Those people are then sentenced to prison. It’s interesting how fast the news gets to Istanbul and spreads. The incident which results in merely the breaking of a window glass is reported as a ‘bombing’. State Radio covers the news on September 6, at 13.00. [ii]. Right after that, Istanbul Ekspres Newspaper makes two additional prints to give the news as ‘breaking news’ with the headline “Our Founding Father’s House Suffered Damage due to a Bombing Attack”.

With this news, the fur flies. On the afternoon of September 6, upon a call from various student associations and Cyprus is Turkish Association, approximately 100,000 people gather at Taksim Square. Then comes smashing and looting of shops owned by non-Muslims on Istiklal Street. The streets of Beyoglu (Pera) are filled with cloth batches, broken glass and various belongings. The churches are set on fire and looted but the police stay passive and the fire department does not respond. The lynching and looting continue on September 7. From Beyoglu, it spreads first to close neighborhoods such as Kurtulus, Sisli, Nisantasi and then to Eminonu, Fatih, Bakirkoy, Yesilkoy, Ortakoy, Arnavutkoy, Bebek, Moda, Kadikoy, Kuzguncuk, Cengelkoy and Prince’s Islands. The attacks are organized. They are organized by three groups, each consisting of 20-30 people called The Perpetrators, the Leaders and the Vandals. The group leaders review the list of places to be vandalized which is given to them beforehand and lead the groups for the lynching. The fact that these lists were put together with information collected from the mukhtars (local authorities) a couple of weeks before the incidents took place, is in the records. [iii].

The witness statements reveal the severity of the incidents. Hıfzi Topuz, who was the editor of Aksam Newspaper at the time, ghastly recounts the things he saw. He says that as soon as they got the news, they went to Taksim. When they get there, the place was filled with hoodlums. Nobody knew where those hoodlums were coming from. After seeing the dreadful scene, he had said to himself, “How are we supposed to get through this? How are we going to be able face the Greeks, the Armenians, the Jews, tomorrow?” That night after he writes his article, together with all newspaper owners and editors, he is summoned to the Governor’s Office for a meeting. President Celal Bayar, Prime Minister Adnan Menderes, major ministers and Governor Fahrettin Kerim Gokay are present at the meeting. They all claim that ‘media is to blame’.  They mention that communists have a hand in these incidents and urge the journalists to unite in solidarity with the government. Topuz talking about the meeting would then say, “In the meeting room, there was a vibe of oppression and terror. I don’t remember anyone taking the floor.” [iv].

Greek Nihalis Vassiliades’s testimony is striking in terms of shedding some light on the police’s approach to the incidents. He talks about a bakery across his house run by an Orthodox Turkish citizen of Albanian origin. The baker who gives his remaining donuts to the Police Station across his shop before he closes the shop had become friends with the policemen.  That night when his shop’s windows are being smashed, he goes to the Police Station in fear and gets an unexpected response. The police captain on call says, “I can’t do anything. Today I am not a policeman. I am a Turk.” [v].

Orhan Eyuboglu, who was the Director of Department of Traffic in Istanbul at the time, gives a testimony at Yassiada trials. His testimony is quite interesting. He states that when he saw the windows of Zappion Greek School for Girls in Beyoglu being smashed, he gave an order to the police force reporting to him to disperse the vandals, however soon after the vandals were dispersed, he was approached by Ethem Yetkiner, the Chief of Police at the time, and Yetkiner told him “Mr. Eyuboglu, do not respond so violently for just a broken glass”. Hasan Colak, who was the on-duty police officer at Sariyer Police Station on September 6, 1955 answers the prosecutor’s questions, as well. He says, “As you may very well know, on that day we were given an order to overlook any incident except for burglary and fire.” [vi].

At the September 6/7 Incidents, 4,214 homes, 1,004 workplaces, 73 churches, 1 synagogue, 2 monasteries, 26 schools, and 5,317 facilities including factories and hotels were attacked.  According to differential information at least 11 people were killed and at least 60 women were raped. [vii]. In the attacks that took place in Izmir, 16 houses, 6 workplaces, 1 church, Greek Pavilion at the Fair and Greek Consulate Building were attacked. The financial damage amounted to 475,000 TL. 50 people, 7 of them in serious condition, were injured. These incidents caused a great disappointment among non-Muslim Turkish citizens. They perceived these events as evidence to the fact that they were not accepted or seen as Turkish citizens. Just like in 1934 when Thracian Jews felt compelled to leave the country, with their estates being destroyed, they too felt compelled to leave. This caused a wave of migration of primarily Greeks along with Armenians and Jews.