For the International Holocaust Remembrance Day, on the evening of January 27th, the Italian Jewish Community and the Istanbul Italian Cultural Institute came together at an event organized under the auspices of the Consulate General of Italy in Istanbul.
Elda SASUN
SHARE ON TWITTER SHARE ON FACEBOOK
February 8, 2021 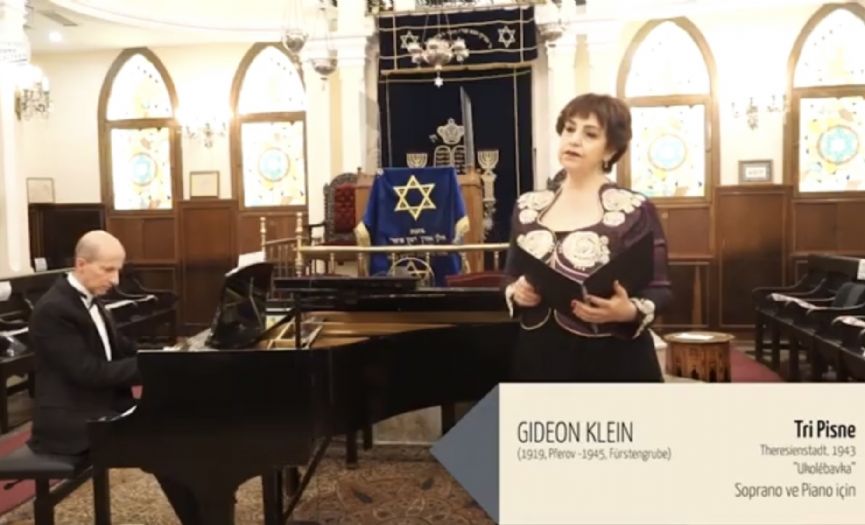 The concert that has been performed live at the Historical Italian Synagogue which had been built in the 1800s by the Italian Jewish Community, was titled 'Not To Forget - Per Non Dimenticare'. Before the concert the Consul General of Italy in Istanbul Elena Sgarbi, the Director of Istanbul Italian Cultural Institute Salvatore Schirmo, and on behalf of the Italian Jewish Community, Chief Rabbi of Turkey Rabbi Isak Haleva shred their messages with the audience.

During his speech, Chief Rabbi Haleva said, "I appreciate greatly the concert Italian Synagogue has organized together with the Italian Cultural Institute due to the Memorial Day. To face probably the most brutal, most unfair, and most painful era of human history is useful even necessary. Not to forget and to make it unforgotten, Holocaust should be told and taught. Every generation has the responsibility to create an environment suitable for the next generations to learn from the past mistakes, not to hold history responsible but to learn the universal truth. The Holocaust concept is a kind of exam to become a human being beyond just being a mortal." Rabbi Haleva in his speech also thanked our artist Renan Koen who strives internationally via music, to let Holocaust become unforgotten.

The director of Istanbul Italian Cultural Institute Salvatore Schirmo's speech in Italian was conveyed by Rıfat Behar, the head of the Italian Jewish Community as follows: "We are greatly honored that the Memorial Day Concert organized in the Historical Italian Jewish Synagogue has been made under the auspices of the Consulate General of Italy and the Italian Cultural Institute and of maintaining this collaboration with the synagogue management.

The Head of Istanbul State Opera Choir and the Choir Director Paolo Villa and the soprano pianist Renan Koen will perform pieces composed from the songs and music in the concentration camps. To keep the memory alive and explain the tragedy of Shoah is extremely important to us and it should not be forgotten."

The Consul General of Italy in Istanbul Elena Sgarbi in her speech, said, "The UN General Assembly determined January 27th as the International Holocaust Memorial Day in 2005. The Italian Government had decided to commemorate the victims of the biggest tragedy of humanity in the year 2000. The Shoah is the symbol of evil which can be repeated by humanity at any time. And unfortunately in recent years, all around the world, a great increase in anti-Semitism, racism, and hate crimes is being seen. Not to let it be forgotten and to remind, to create a better, more just, and more humane society has become our major cause. Memorial Day is not only important for the memories that need to be kept alive, it is also a call. In a troublesome year such as this, struggling with pandemic all over the world, the Italian Cultural Institute, the Italian Synagogue, and Consulate General of Italy is reiterating a fundamental tradition of our community. The message of this event is always very important and the same; it is remembering the victims of the past, all together. Let's work to prevent Holocaust from ever happening again in the future and let's not let it be forgotten."

Following the speeches, the concert which was directed and filmed by Alberto Modiano began. Renan Koen and Paolo Villa performed a meaningful musical program consisting of the works of composers who were Holocaust victims.

During the concert streamed live from the historical Italian Synagogue, Renan Koen first played piano pieces by Victor Ullmann who had composed the pieces in the Theresienstadt concentration camp. Then Koen together with Paolo Villa performed pieces for soprano and piano. The first song played by Paolo Villa and sang by soprano Renan Koen was 'I.Kaddish' from the album 'Deux Mélodies Hébraïques' by Maurice Ravel. Secondly, Koen sang the song 'Ukolébavka' from the album 'Tri Pisne' composed in Theresienstadt by Gideon Klein. The third piece sang by Koen, composed by Mikis Theodorakis in memory of the Holocaust victims was titled 'Asma Asmaton' from the album 'Mauthausen'. Koen then sang the Romany song 'Mamo Mamo (Mother Mother)' which had been sung by the Romanes in the Auschwitz Birkenau death camp. The final piece of the memorial concert was the Sephardic song 'Arvoles Yoran Por Luvya (Trees Cry for Rain)' by Alberto Hemsi which had been sung by the Thessaloniki Jews in Auschwitz Birkenau.