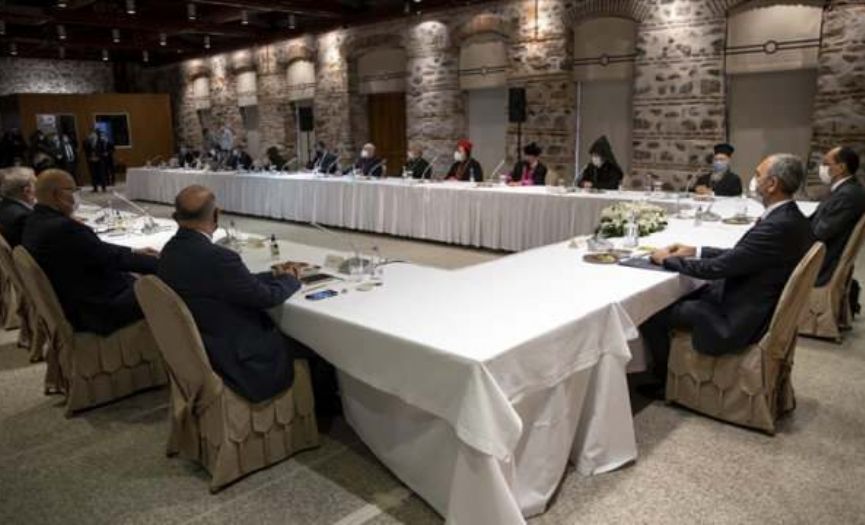 Following the meeting that lasted approximately three hours, Abdülhamit Gül and Ibrahim Kalin gave declarations to the journalists. Minister of Justice Gül, stating that they had an important, productive, and successful consultation meeting with the representatives of the minority communities, added it has been expressed that important steps have been taken during the AK Party Government under the leadership of President Erdoğan for 18 years.

Minister Gül added, “Today, again, we had a good, productive meeting where we evaluated all together, the additional implementations or recommendatory legislations, and expectations on the issues such as property rights, education rights, and organizational rights. Just as yesterday, we will take all the steps to increase them today and tomorrow. 83 million people in Turkey are all equal, first-class citizens. We will continue with this reformative line and determination, to take all the necessary steps to create an atmosphere where not even one person shall feel as ‘other’ because of their beliefs, thoughts, identities, ethnic belongings. We talk about everything, solve all problems, continue our route to solve our country's problems, the most important thing is to protect the rights of 83 million. In this context, in a very constructive and very friendly environment, together with our Presidential Spokesperson Ibrahim Kalin, we evaluated concretely what other steps should be taken for the hate crimes. We will take the necessary steps in the upcoming period, together with the relevant institutions. The Republic of Turkey is a great country; it will continue to be strong with its minorities, all its citizens whichever religion should they believe in, with harmony and solidarity. We will continue to take all our steps with this self-confidence and determination.”

The Presidential Spokesperson Ibrahim Kalin in his declaration about the meeting said, "These meetings had been organized many times previously. Our members of the minority community who couldn't find anyone from the government to communicate with before, are now welcomed and listened to at the highest ranks of the government. Along with the Law on Foundations published in 2008, a revolutionary change has come and properties belonging to our foundations had been returned to them, the road to this process had been paved. We evaluated these issues and the steps taken in the past 18 months. We had the chance to assess together what should be done today and in the future, and what the problems, trials, and challenges that lie ahead are."