Hrant Dink Foundations Media Watch on Hate Speech Report covering the months May, June, July, August of 2019 is published. The only difference is Jews who are always one of the first three groups, are the 4th this time...
SHARE ON TWITTER SHARE ON FACEBOOK
December 17, 2019 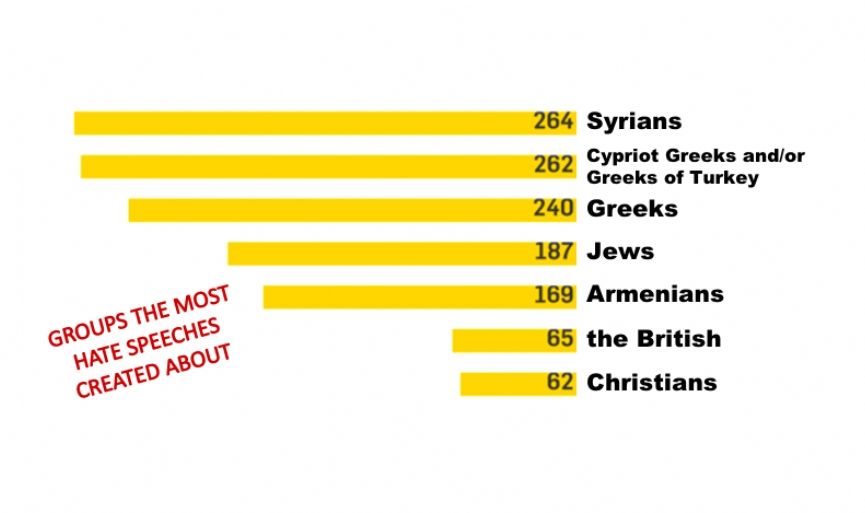 The new report on Media Watch on Hate Speech, published by Hrant Dink Foundation has presented similar results as the last one. The only difference is that the Jews who are always among the first three groups hate speeches are directed towards, this time are the 4th.

No change in the numerals

In the previous report, covering the months of January, February, March, April of 2019, there had been 1591 hate speeches in 1322 editorials and news texts.

In the new report, 1299 articles and news were found targeting ethnic and religious groups. In 14 texts, hate speeches towards more than one group, in various categories, were present, so these texts were examined more than once, thus reaching 1313 texts. In all the texts examined 1575 hate speech content was discovered about 46 different groups.

Syrians are the first

The group most hate speech is fabricated about was Syrians. They are followed by Cypriot Greeks and/or Greeks of Turkey, the Greeks, and the Jews. Armenians are fifth, the British are sixth and the Christians are seventh on the list.

Hate speeches were focused on these subjects: The announcement of the Istanbul Mayor Election renewals in May, the tension experienced in South Cyprus due to the natural resource exploration in June, the anniversary of Srebrenica murder in July, August 30th Victory Day and the decision of sending Syrians to the cities they are registered at...

The Jews whom we are used to seeing on top of the hate speech fabrication list, are 4th for the first time. The hate speeches about Jews were as follows:

♦ In the news concerning the Israeli-Palestinian conflicts and covering the problems being lived in and around Al-Aqsa Mosque, they were identified with violence as a community and were alienated,

♦ Instead of using words like ‘State of Israel’, ‘Israel’, or ‘Israel Defense Forces’ that define people or institutions, they were targeted generalizing and using the Jewish identity,

♦ They were related to many people or organizations which took place in the media with a negative reference; Jewish identity was used as an insult.

54% of hate speeches appeared in national newspapers (38 newspapers) and 46% of them in local media (352 newspapers). Hate speeches were encountered in 681 news and 591 articles.