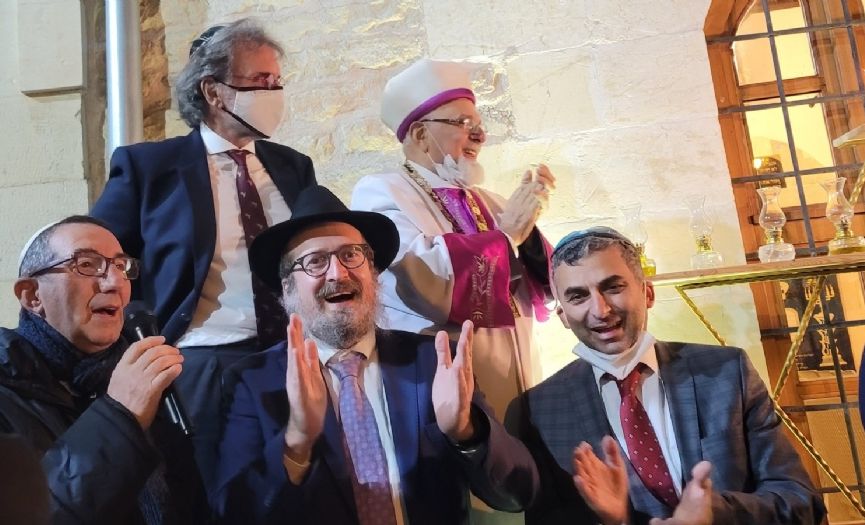 Chief Rabbi Isak Haleva while expressing his gratitude to the authorities who gave them this chance, said, "I sincerely thank you for your hospitality and warmth, and offer my best wishes to all the people of Kilis. We are celebrating Hanukkah in Kilis after nearly 60 years."

Ishak Ibrahimzadeh, the co-President of the Turkish Jewish Community, stating that for the last 20 years an unprecedented period is being lived in Turkey, thanked the authorities who gave them this opportunity.

Since among the 40 people group, there were some Jews who had been born in Kilis, emotional moments were experienced during the tour of the city, as they relived their memories of 55-60 years ago.

Raşel Nahmed mentioning that she left Kilis 55 years ago, said, "My father had been a draper here, then we moved to Israel. We came to Kilis 55 years later. All our memories were revived. I am very excited, I am very happy."

Şule Tavaşi stating that she came to Kilis where she had been born 17 years ago, said, "I was very excited. I was so happy; we saw where my father had worked. We saw our home."

The organization in Kilis, where many Turkish Jews attended, began with the meeting with the Governor of Kilis. After a short tour of Kilis and the city center, the group went to the Kilis Synagogue which had been renovated in 2019. Following the Mincha and Arvit prayers, the Anoten prayer was recited. Then the Hanukkah ceremony started. First, the Hanukkah prayer was recited with great enthusiasm during the candle lighting ceremony and then Hanukkah songs were sung all together ending the ceremony. Also during the ceremony, some people of Kilis, who were around the synagogue at the time, have reportedly come into the synagogue to watch the Hanukkah ceremony in the synagogue.