Yesterday marked the 18th anniversary of the November 15th terror attacks. During the attacks towards Şişli Beth Israel and Neve Shalom Synagogues of Istanbul in 2003 and of which al-Qaeda had assumed responsibility, 28 people had lost their lives, more than 300 people had been injured. 18 years after the attack, one of the witnesses Mois Gabay, told CNN Türk what had happened.
SHARE ON TWITTER SHARE ON FACEBOOK
November 16, 2021 335 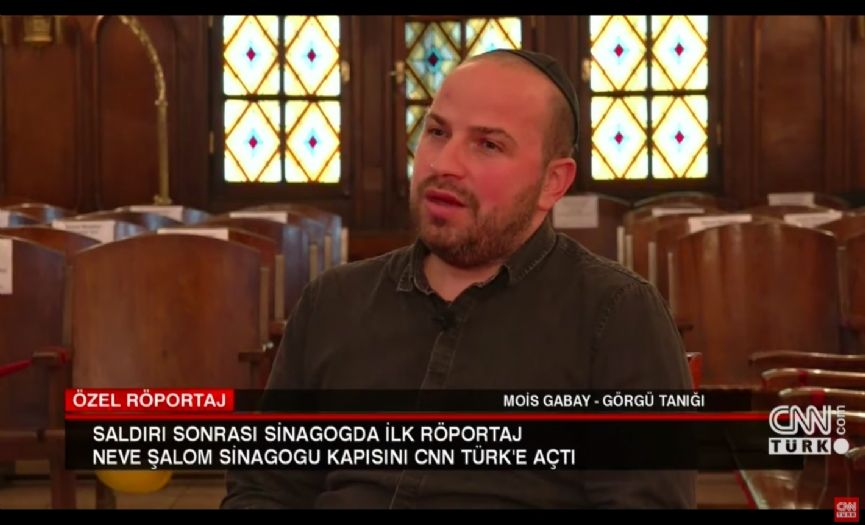 Mois Gabay - Witness [Caption: The first interview in the synagogue after the attack; Neve Shalom opened its doors to CNN Türk]

In his interview, Mois Gabay expressed his experiences and feelings as follows:

"I was in Neve Şalom Synagogue on the morning of November 15th, 2003. I saw that there was a hole in front of it after the explosion. My mother was calling me, my friends were calling me; I remember losing myself as to not remembering what I had talked about on the phone. I remember well that chaos we had lived. Everybody was calling a loved one. There was a big chaos."

Mois Gabay remarked that he later had learned about the explosion in front of the synagogue in Şişli, and in the later hours he had learned that some of his friends had been injured, had gotten news of people's passing among the community and around the synagogue. Gabay said, "In the pictures, videos from that day, there were elderlies of our community who were thankful and praying they had been spared. Think about it; what a difficult situation it is for a community. To say 'Come and pray here, safely' for a place that had been terror attacked three times.

Mois Gabay who is emphasizing that the only purpose is never to live through something like that once again, also reminding the attack in 1986 said, "We are telling the young people, those who were born in 2003, of our experiences, just as our elders had told us about 1986 [attack], without teaching them to hate but making them understand that they should never forget."

Mois Gabay stated, "When I was trying to see the synagogue from the outside that day, I had promised myself, 'I will never see this synagogue like this'. Sometimes you ask, when was the moment you felt as most Jewish. The time I had felt most Jewish had been the date November 15th, 2003", accentuating the continuance of Jews on Turkish lands, added, "We will go on living here."