Moshe Arditi, MD, a physician-scientist, who has devoted much of his career to investigating a coronary disease mainly afflicting children and often leaving them with lifelong heart problems has received the Cedars-Sinai Pioneer in Medicine Award for 2019.
SHARE ON TWITTER SHARE ON FACEBOOK
October 24, 2019 1750 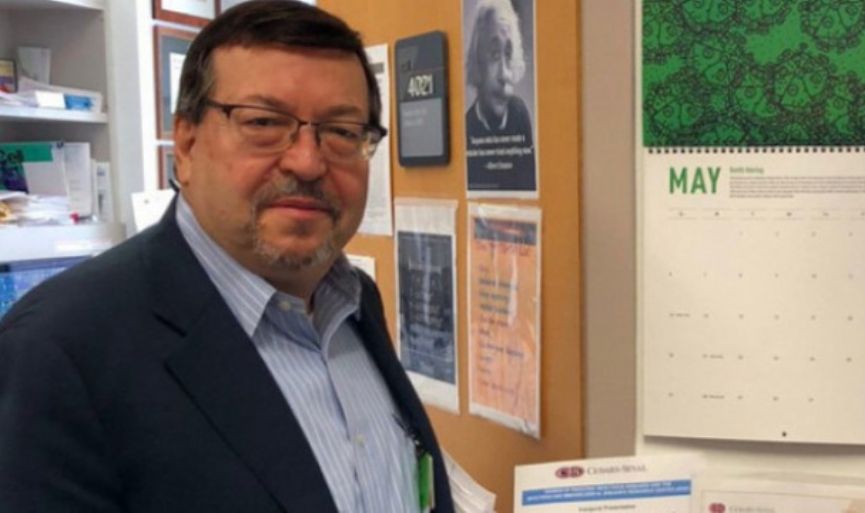 Moshe Arditi, MD, is a leading international expert in Kawasaki disease, an ailment that is the nation’s No. 1 cause of acquired heart disease.  Arditi, graduated from Cerrahpaşa Medical Faculty in Istanbul Turkey, in 1981. He then moved to the U.S., where he has been working and making researches in children’s diseases for 31 years. He is the Director of ‘Infectious & Immunologic Disorders Research Center’ and the Academic Director of the ‘Division of Infectious Diseases’ in the Cedars-Sinai Medical Center. He also is a professor both at Cedars-Sinai and UCLA. Besides many physicians, the Consul General of Turkey in Los Angeles Can Oğuz and Arditi’s family who came from Turkey, attended the award ceremony. This award that has been given to physicians that are/have been involved in research, published in national or international peer-reviewed journals, a teacher and a positive role model, an innovator or someone who has changed the medical world around him or her, for more than 30 years, is given to a Turkish physician for the first time. Arditi said, “I am very proud of this award.”

Arditi said his interest in the affliction was inspired three decades ago while he was being trained as a pediatric infectious diseases specialist. During that time, he treated hundreds of young Kawasaki patients at the medical center now called Lurie Children’s Hospital of Chicago, an affiliate of Northwestern University.  The work of his research lab at Cedars-Sinai, Arditi said, is conducted with an eye toward helping “hundreds of thousands of kids with Kawasaki disease” and preventing them from developing cardiac disease as adolescents and adults.  Another major focus of Arditi’s research is focused more directly on cardiac disease in adults. His research lab at Cedars-Sinai has explored the role that infections and their resulting inflammation can play in worsening atherosclerosis, a buildup of substances including fats and cholesterol in the arteries, which can restrict blood flow and lead to heart attacks.  Arditi, a jazz aficionado who draws parallels between the musical form and science, aimed some of his final remarks in the speech he prepared for the presentation of the award on Oct. 14 at “young investigators and physician scientists.” One piece of advice was that, “There is nothing like the thrill of discovery. That is being something bigger than yourself, that is one of the greatest motivations for a scientist.”  Arditi also cautioned that science “is a marathon and not a sprint, you have to be in it for a long haul. There is a lot of pounding you have to take, it is a lot like boxing. You are going to get knocked down several times; the question is, can you get back up, and if you can, will you still be in the game.”