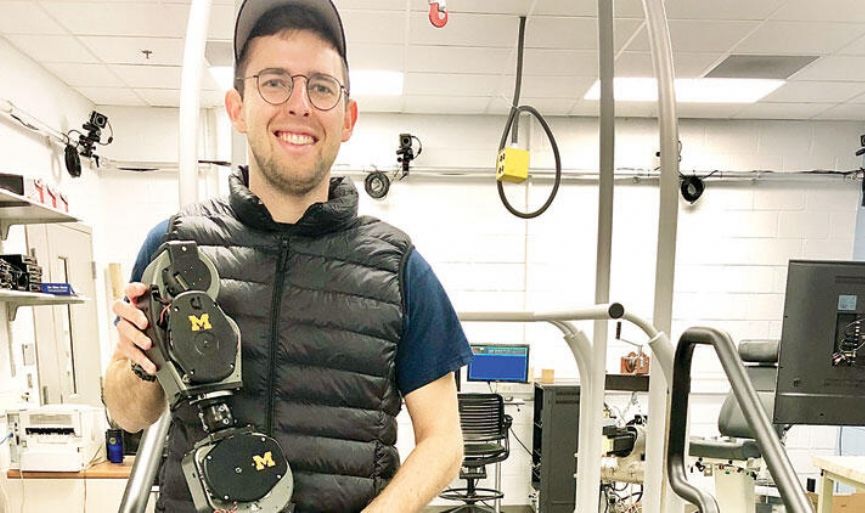 In University of Michigan, a bionic leg was developed by a team of engineers led by Dr. Elliott J. Rouse from the Mechanical Engineering Department. This robotic prosthetic leg which can be moved by artificial intelligence, is aiming to ease the lives of many leg amputees.

Enis Habib is a Turkish young man, who graduated with honors from Üsküdar American Academy (UAA) in Istanbul in 2015. This year he graduated with honors with a Bachelor of Science in Mechanical Engineering and a concentration in Computer Science from the University of Michigan in the United States. Habib is part of the team which developed the simple, relatively inexpensive yet high-performance bionic leg that can be easily manufactured, assembled and controlled.

When Enis joined, the bionic leg, which is still being improved today, needed a well-rounded website, since the main aim of this project is to share the results with other researchers and create the standard for prosthetic legs for researchers working on this field. This standardization of prosthetic legs used in research will advance the field rapidly and help the ones in need.

Enis, together with his team mate from the U.S., created the website of this bionic leg, which was crucial in making it open-source. Through the website https://opensourceleg.com/ researchers will have access to downloadable hardware and software files, so that they do not have to start the prosthetic leg research from scratch, since it is both time and money consuming.

In this website, Enis has created and published all 17 step-by-step assembly instructions for the bionic leg, which has over 300 parts. For each 17 steps of the assembly, he created custom videos with subtitles, diagrams and visuals so that each step was simple, easy to understand and repeatable by other researchers. In addition, since June 2019, he has been improving the hardware of the bionic leg together with the team.

Enis is saying that creating wearable robotic technologies like prosthetic legs was his childhood dream, because when he was a kid, he wanted to help his grandma who had trouble walking because of the problems in her knee. He is adding that he was also inspired by the ‘Iron-man’.

Enis talked about how he joined this team: “One day the president of the Neurobionics lab, Dr. Elliott Rouse, who was also my teacher, came to class with the bionic leg in his hand. He started explaining how the leg works, writing formulas on the board. At that moment, I knew this was the chance I was dreaming of. After class I eagerly asked him for a one-on-one meeting, to learn more about this project. We had a great meeting and I was inspired to join the project. At the beginning of my fourth year in college, I had started working on the project through the Research Innovation Service and Entrepreneurship class, which allows students to work with Professors on world-class projects. After my great work on the project in this class, during which I started creating the website, I was offered a part-time job and since January 2019, I have been working on this project as a Research Assistant.” 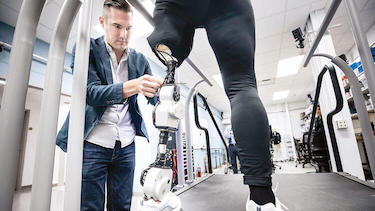 The robotic prothesis leg they developed, can speculate the user’s next move via artificial intelligence and move accordingly. For example, when climbing the stairs or walking, it can sense your body and muscle movement, and react respectively. The leg takes the next step for you, allowing you to walk in a natural way.

During his live interview on the Turkish TV channel CNN Türk, Enis Habib gave young people an advice saying, “I want to call out to young people, like me, I want this from you; please keep on dreaming, follow your dreams and when you see a problem that bothers you, ask yourselves ‘Why shouldn’t I be the one to correct this problem?’ Don’t wait for someone else to change the world, face the problem head on.”