Its time to be normal

54 percent of the voters were sending a very important message to everyone, when they were in a way saying stop to the government mentality, which had spread to the mainstream of the country.
İvo MOLİNAS
SHARE ON TWITTER SHARE ON FACEBOOK
June 28, 2019 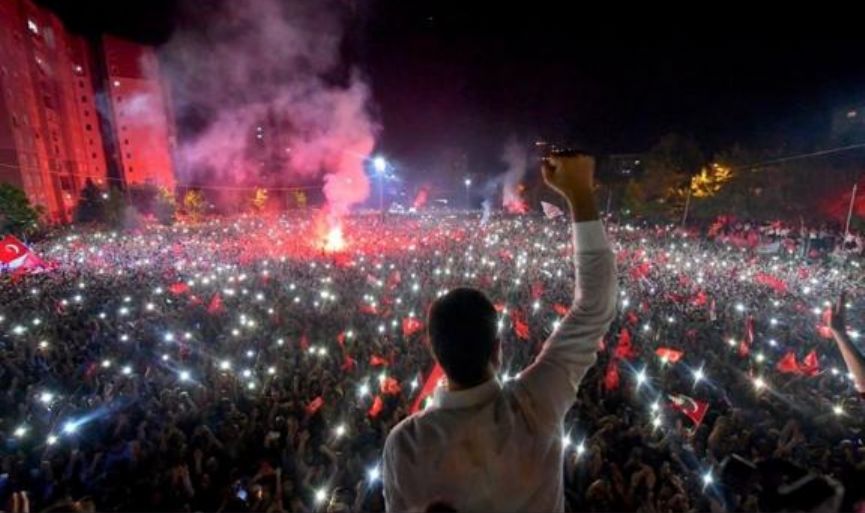 Since the repeated elections are over, we can finally go back to our lives.

The innocent country where its citizens have been so polarized with the struggles for political power, that they can’t even say “hello” to one another, can finally relax and look ahead.

People singing and dancing all together on the streets right after only a simple mayoral election, can only mean one thing; this nation has missed laughing and having fun really bad...

Now, it is time put an end to alienating, discriminating people, in the name of politics.

Ekrem Imamoğlu’s winning the elections by a wide margin and Istanbul’s being back to be ruled by CHP (the opposing political party) after 25 years, has a greater meaning than just the outcome of a metropolis election.

54 percent of the voters were sending a very important message to everyone, when they were in a way saying “stop” to the government mentality, which had spread to the mainstream of the country.

Besides the worries of justice and alleged extravagance economy, unemployment, economic problems and struggle with the migrants have shifted Istanbul, heart of Turkey, to a very different place.

The weird paradox which didn’t escape the voters was that the people who right before the previous election had said that Turkey’s sovereignty and territorial integrity (Beka) was at risk, this time tried to earn votes through Ocalan, whom they previously argued was a terrorist.

Right after the results of the election were revealed, Mustafa Yeneroğlu, AKP’s (ruling party) deputy of Istanbul in a way confessed through his twitter account saying:

“We lost Istanbul because we lost our moral superiority. We can give hope again if we can self-criticize ourselves. For this we have to let go of the past, the myths and look to the future, to the dreams of young people, focus on rationality, superiority of justice, principle of separation of powers and basic rights.

I also have a vision of Turkey; a country where everybody is down to earth, where thoughts we don’t accept aren’t silenced with anger and violence, where social diversity can be seen as a richness, where Turkey’s prosperity can be achieved through different sounds and where mutual intolerance is not an issue anymore.

On the night of the elections, right before the results came clear, Binali Yıldırım’s clear and hearty congratulation of his opponent and his wishing him well, should be seen as a wise attempt of moving away from this polarization. Likewise, President Tayyip Erdoğan’s congratulating Imamoğlu and stating that the results of the election was in fact the realization of national willpower, are the long-lost footsteps of becoming normal once again.

Nonetheless, it seems that we will still have to wait, for the same normalization to reach most of the media.

Some of the media supporting the political party in power, still haven’t noticed that they in fact are hurting them with their polarizing and alienating attitude, that they go on, even after the elections, acting the same way.

It is also unfortunately very probable that as long as these people who don’t update themselves and cause more alienation through creating misleading conceptions, it will take even more time for us to become normal again.

Before the elections Şalom, just as journalist Ahmet Hakan had praised in his column, made an ‘exemplary journalism’ interviewing both candidates the same week and reflecting them in the newspaper equally. Be that as it may, some people, by saying that Şalom overlooked its interview with Binali Yıldırım and publish only Ekrem Imamoğlu’s interview, thus asking "who is with whom?”, tried to create a misperception. Nevertheless, as the truth is one, the misconception was instantly burnt to the ground...

It has to be understood clearly that this kind of understanding, is hurting both the media ethics and the party they think they are supporting, even in the short term.

I hope the supported party can see this reality and take the necessary precautions.

In Imamoğlu’s ‘victory speech’ after the results of the election were announced, his words as, “There is no concept like minority in this city. We will embrace the Greek, the Syriac, the Armenian and the Jew; everyone. We will build democracy and future in this city”, away from polarization and alienation, gave hope as to embracing each and every member of this community and setting a good example.

Furthermore, Imamoğlu’s statements of that night as, “We came to power to get together, to compromise and to love one another. Forget all your prejudices...” was a promise full of hope towards becoming normal again.

“To compromise and to love one another...”

For, now is the time to be normal again.