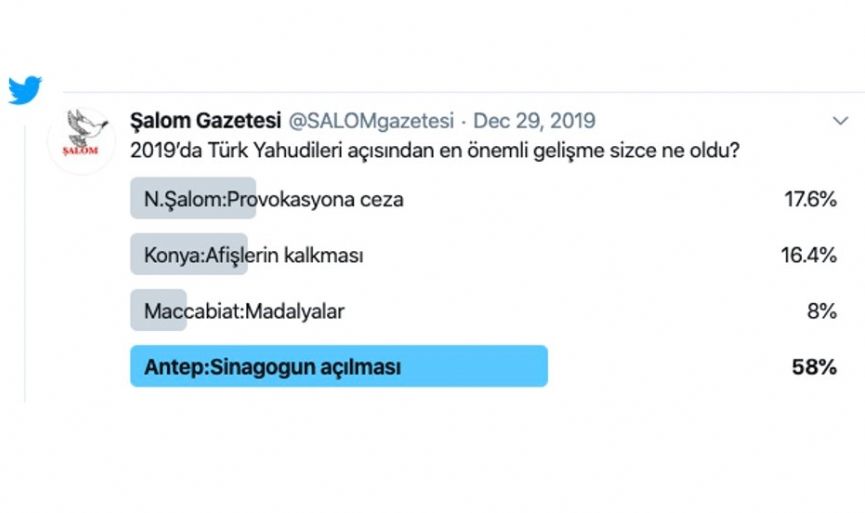 Many important events took place in the year 2019 that affected Turkish Jews profoundly.

Two years ago, on July 21, 2017, a group of agitators had gathered in front of Neve Salom Synagogue’s gate for a provocative demonstration. In 2019, one of the defendants that took part in the provocation was sentenced to one-year imprisonment. The court convicted the defendant Kürşat Mican for publicly inciting hatred and hostility. Removal of Hate Billboards in Konya

The billboards bearing hate which were placed at the bus-stops in Konya, saying "Do not befriend Jews and Christians", were removed by the Konya Municipality after 24 hours. The 15th European Maccabi Games in which 2300 athletes from 42 different countries attended, was organized in Budapest in 2019. The Turkish athletes winning many medals in various fields, made our country proud.

What Our Readers Think...

When we, as Şalom Newspaper asked, "Which development of 2019 in your opinion was the most important one for the Turkish Jews?", our readers answered through social media as follows:

As the most important event, 8% of them qualified the medals Turkish athletes won in the European Maccabi Games, 16% stated the removal of hate billboards in Konya, in a short time. Where 18% of the participants said that a defendant's being convicted for the first time in the Neve Şalom Synagogue incident was an important improvement, 58% stated that Gaziantep Synagogue's being renovated and opened was the most important development.