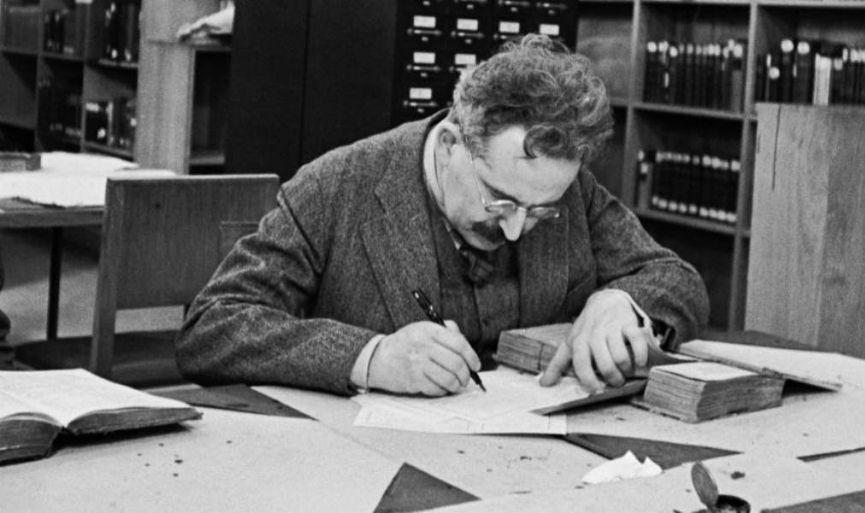 It has been thirteen years since I translated Amos Elon's book ‘The Pity of It All: A Portrait of Jews in Germany 1743 – 1933’ into Turkish which was published by Gozlem Publishing. The book begins in 1743 when Moses Mendelssohn comes to Berlin when he was still a child and tells about a line of German Jews who pursued to assimilate into German culture and identity, until the Nazis came to power in 1933. This line begins with Moses Mendelssohn and touches on to the most famous of them: David Friedländer, Heinrich Heine, Ludwig Börne, Ludwig Bamberger, Franz Kafka, Karl Marx, Albert Einstein, Fritz News, Walter Rathenau and Hannah Arendt. From known to unknown, hundreds of names that cannot possible to be recognized and kept in mind…

Who was Walter Benjamin? Was he not one of the heroes of this series? Yes, he was. The childhood of Walter Benjamin finds a period of about 25 years between 1888 and 1914, defined by historian Gordon A. Graig as ‘the period of institutional stability, technological progress and economic prosperity’ before the First World War. In an eternal bourgeois trust, Walter Benjamin spent his childhood in the rich suburb of Grünwald, on the lake shore of Berlin, in his grandmother’s house which includes 12 - 14 rooms, walls, books and high quality tables and precious objects.

According to him and others like him - despite the class differences across the society - anti-Semitism that has come from the past and has been engraved on all the layers of the society has been slowed down by the spreading economic prosperity, and the discrimination between the Germans and the Jews was diminishing. Walter Benjamin loved the Easter egg. He felt ‘insecurity’ against Jewish religious ceremonies. These ceremonies promised him nothing but feelings of embarrassment.

After World War I which was unexpectedly exploded, everything has been changed in Germany in the early 1930s. The brutal street violence had been revived. The windows of the shops which were the properties of Jews were broken. On 12th September 1931, the Nazis attacked Jews in the synagogue on the eve of Rosh Asana in Kurfürstendamm Pogrom.

As a result of these events, special letters which were written by lesser-known German humanists of the 19th century were published in 27 sections in Frankfurter Zeitung for provide precaution and defense. Walter Benjamin also wrote unsigned additional comments on each one. After the war, “Benjamin had to write without his signature because the shadow of fascism had already begun to show itself,” wrote Theodor Adorno.

Let us read those days from Elon's book: “Benjamin's choices and comments were the greatest compliment ever made by a German Jew to German humanism until that day and the most sad tombstone inscription ever written. Over the years, Benjamin chose letters from archives and rare books that he had collected between 1783 and 1883. While publishing them Benjamin believed that he uncovered, like an archaeologist, an ancient and secret tradition that have been spoken in the Enlightenment period and defended by the best brains but never rooted. There was nothing snobbish in the letters that he chose. The letters were not written by famous poets and philosophers but by humble and virtuous people who represented straightness, correctness and German culture - as well as unfamiliar friends, relatives and fans: The letters weren’t written by Kant but his brother Johann Heinrich, not Goethe but his friend Friedrich Zelter, not Nietzsche but his friend Franz Overbeck… It should not be a coincidence that all letters except one were written before the great Reich of Bismarck was established. (…) This review is like a catalog of an exhibition of a buried civilization which is documented reminds that the system of values ​​and grieves. Benjamin's collection was a warning that even the dead would not be safe, if the Nazis won. The last episode was published on 31st May 1932, two months before the Reichstag elections.”

Walter Benjamin was in Berlin when the Nazis took over the control. But at the first opportunity, he went to Paris with his valid passport. On 20th January 1933, in a letter to Scholem who was Walter Benjamin’s friend from his youth and had migrated to Palestine ten years ago and changed his name from Gerhard to Gershom, Walter Benjamin wrote that the situation in Germany reflects not only ‘terror against people’, but also ‘a general cultural fall.’ At that time, Paris was becoming the true capital of German literature: Brecht, Mann, Feuchtwanger, Cassirer, Döblin, Kerr and many others; Jews or non-Jews were there.

Benjamin left Paris in the summer of 1940 when the German armies strengthened its position. The last months of Benjamin’s life reflected the dangerous and insecure situation of countless German Jews in Vichy France: Escape to border and prepare yourself for immigration through legitimate and illegitimate ways. He was captured while escaping from France through the Pyrenees and was given back to France. After all, on 27th September 1940, he ended his life in Port Bou, Spain.

After 13 years, Pınar Dogu’s article reminded us Walter Benjamin and his sorrowful story. In the meantime, as there is not much space left, I would like to finish my writing by reminding the International Holocaust Remembrance Day on 27th January. Remember.