What is Herd Immunity and Can It Stop the Coronavirus? 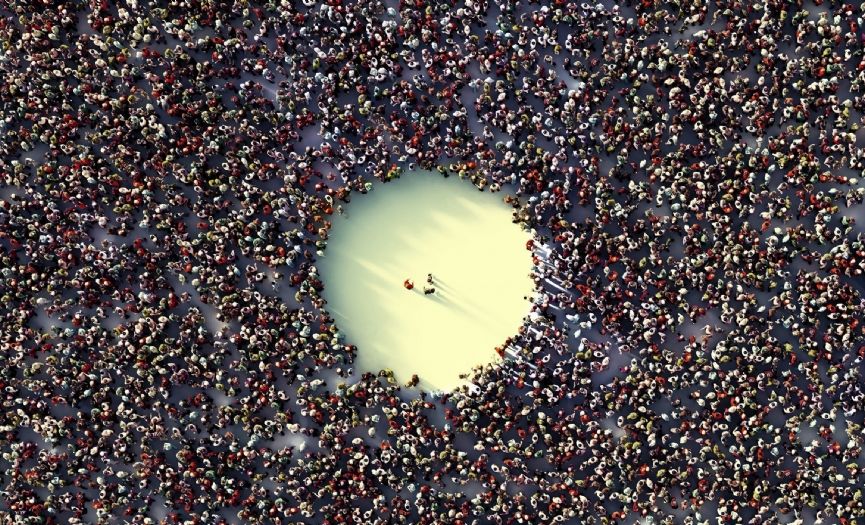 There are basically three ways to stop the Covid-19 disease for good. One involves extraordinary restrictions on free movement and assembly, as well as aggressive testing, to interrupt its transmission entirely. That may be impossible now that the virus is in over 100 countries. The second is a vaccine that could protect everyone, but it still needs to be developed.

A third is potentially effective but horrible to consider: just wait until enough people get it.

If the virus keeps spreading, eventually so many people will have been infected and (if they survive) become immune that the outbreak will fizzle out on its own as the germ finds it harder and harder to find a susceptible host. This phenomenon is known as herd immunity.

Wide, unstoppable spread of the coronavirus is exactly an outcome experts are modeling in their worst-case scenarios. They say that given what they know about the virus, it could end up infecting about 60% of the world’s population, even within the year.

Those figures aren’t a random guess. They are informed by the point at which epidemiologists say herd immunity should kick in for this particular virus.

Last week the herd immunity idea blew up in the headlines after UK prime minister Boris Johnson indicated that country’s official strategy might be to put on a stiff upper lip and let the disease run its course. The chief science adviser to the UK government, Patrick Vallance, said the country needed to “build up some kind of herd immunity so more people are immune to this disease and we reduce the transmission.”

Yesterday, the prime minister of the Netherlands, Mark Rutte, struck a similar note, saying, “We can slow down the spread of the virus while at the same time building group immunity in a controlled way.”

But shooting for herd immunity right away would be a disastrous strategy, according to the newest models. That’s because so many people will become severely ill—and a sudden boom in sick people needing hospital or ICU care will overwhelm hospitals. The UK this week signaled it would instead do more to suppress the virus, including discouraging gatherings. Slowing it down would mean health systems could be spared and lives saved, but ultimately the result could be the same. That is, even if the pandemic is drawn out over time, it may still take herd immunity to bring it to an end.

As Matt Hancock, the UK Secretary for health and social care, clarified after criticism of the UK government: “Herd immunity is not our goal or policy. It’s a scientific concept.”

But what exactly is herd immunity?

When enough of the population is resistant to a germ, its spread stops naturally because not enough people are able to transmit it. Thus, the “herd” is immune, even though many individuals within it still are not.

Although it is ghastly to contemplate the prospect of billions being infected by the coronavirus, which has an estimated fatality rate per infection somewhere around 1% (pdf) (that too is uncertain, and the fatality rate of cases rushed to the hospital is higher), we’ve seen evidence for the emergence of herd immunity in other recent outbreaks.

How herd immunity can stop a virus

In a simple model of an outbreak, each case infects two more, creating an exponential increase in disease. But once half the population is immune, an outbreak no longer grows in size.

Consider the Zika virus, a mosquito-borne illness that caused a epidemic panic in 2015 because of a link to birth abnormalities.

Two years later, in 2017, there was no longer nearly so much to worry about. A Brazilian study found by checking blood samples that 63% of the population in the northeastern beach city of Salvador had already had exposure to Zika; the researchers speculated that herd immunity had broken that outbreak.

Vaccines create herd immunity too, either when given widely or sometimes when administered in a “ring” around a new case of a rare infection. That’s how diseases like smallpox were eradicated and why polio is close to being erased. Various vaccine efforts are under way for this coronavirus, but they may not be ready for more than a year.

Even then, vaccine makers can find themselves in a losing race with nature to see which protects the herd first. That’s in part what happened in 2017, when drug maker Sanofi quietly abandoned a Zika vaccine in development after funding dried up: there simply wasn’t much of a market any longer.

The coronavirus is new, so it doesn’t appear that anyone is immune to it: that’s what lets it spread and why it can have such severe effects in some people.

For herd immunity to take hold, people must become resistant after they are infected. That occurs with many germs: people who are infected and recover become resistant to getting that disease again, because their immune system is charged with antibodies able to defeat it.

About 80,000 people have recovered from the coronavirus already, and it’s likely they are now resistant, although the degree of immunity remains unknown. “I would be surprised, but not totally surprised, if people did not become immune,” says Myron Levine, an infectious disease expert at the University of Maryland. Some viruses, like the flu, do find ways to keep changing, which is why immunity against such seasonal germs isn’t complete.

When do we reach immunity?

The point at which we reach herd immunity is mathematically related to the germ’s propensity to spread, expressed as its reproduction number, or R0. The R0 for the coronavirus is between 2 and 2.5, scientists estimate (pdf), meaning each infected person passes it to about two other people, absent measures to contain the contagion.

To imagine how herd immunity works, think of coronavirus cases multiplying in a susceptible population this way: 1, 2, 4, 8, 16, and so on. But if half the people are immune, half of those infections won’t ever happen, and so the spreading speed is effectively cut in two. Then, according to the Science Media Centre, the outbreak simmers along like this instead: 1, 1, 1, 1 … The outbreak is snuffed out once the infection rate is less than 1.

The current germ’s rate of spread is higher than that of the ordinary flu, but similar to that of novel emergent influenzas that have occasionally swept the globe before. “That is similar to pandemic flu of 1918, and it implies that the end of this epidemic is going to require nearly 50% of the population to be immune, either from a vaccine, which is not on the immediate horizon, or from natural infection,” Harvard University epidemiologist Marc Lipsitch told a gathering of experts on a video call this weekend.

The more infectious a virus is, the more people need to be immune for us to achieve herd immunity. Measles, one of the most easily transmitted diseases with an R0 over 12, requires about 90% of people to be resistant for unprotected people to get a free ride from the herd. That’s why new outbreaks can start when even small numbers of people opt out of the measles vaccine.

Similarly, if the coronavirus spreads more easily than the experts think, more people will need to get it before herd immunity is reached. For an R0 of 3, for example, 66% of the population has to be immune before the effect kicks in, according to the simplest model.

Whether it’s 50% or 60% or 80%, those figures imply billions infected and millions killed around the world, although the more slowly the pandemic unfolds, the greater the chance for new treatments or vaccines to help.

The newest epidemiological models developed in the UK now recommend aggressive “suppression” of the virus. The basic tactics being urged would be to isolate sick people, try to reduce social contacts by 75%, and close schools. Those economically costly measures could continue for many months.

“Suppressing transmission means that we won’t build up herd immunity,” says Azra Ghani, the lead epidemiologist on the new model of the outbreak from Imperial College London. The trade-off of success is “that we are driving it down to such a low level that we have to keep those [measures] in place.”