Under Erdoğan, Turkish Authorities are Leading a Revival of Jewish Heritage

Some say the cultural rejuvenation is an act by the president to cover his inherent antisemitism, while others say it represents a genuine interest in the community´s past.
SHARE ON TWITTER SHARE ON FACEBOOK
February 21, 2022 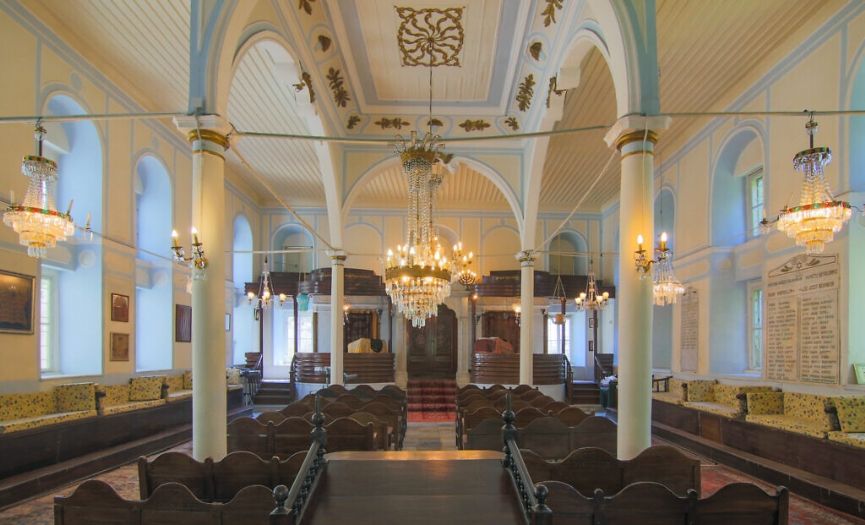 A photo of the interior of Sinyora synagogue in Izmir, Turkey. (Nesim Bencoya/via JTA)

Turkey, a country with a dwindling Jewish population and a Muslim leader who’s been accused of making antisemitic remarks by the US State Department, might not present the likeliest scene for a revival of Jewish heritage.

Yet that is what has been happening there for the past five years. Historic synagogues have been renovated and a historic center of Sephardic life holds an annual culture festival.

Some observers regard this revival, much of it underwritten with government funds, as little more than an attempt by President Recep Tayyip Erdoğan to ditch the antisemitism label he has earned by ranting against Israelis and Jews and dismissing critics as stooges of Israel.

But others identify a more complex set of motivations, combining aspirations to attract tourists and a genuine appreciation for the ancient presence of Jews in Turkey and their contribution to its culture.

Last December 3, the fifth day of Hanukkah, leaders of the Jewish community of Istanbul celebrated the reopening of the local synagogue in Kilis, a town situated about 250 miles away near the border with Syria. Only two years ago the building was a ruin favored by goat keepers.

The Kilis celebration, hosted by municipal bosses, coincided with the Izmir Sephardic Culture Festival, an annual Hanukkah event kicked off in 2019 by the local government of Konak — the most populous of the 11 districts of the Izmir metropolitan area — and the Izmir Jewish Community Foundation. The festival features tours of Jewish heritage sites in the western Turkish city, historically known as Smyrna. Four out of Izmir’s nine synagogues have been renovated recently, though very few Jews live there.

This effort is reminiscent of similar initiatives in other Mediterranean countries with small Jewish communities and rich Jewish heritage, including Spain, Portugal, Italy and Greece.

But in Turkey, the investment in Jewish heritage sites is coinciding with what critics call state-sponsored antisemitism and a vehemently anti-Israel agenda led by Erdoğan, whom the US State Department in May 2021 accused of making “antisemitic comments.” 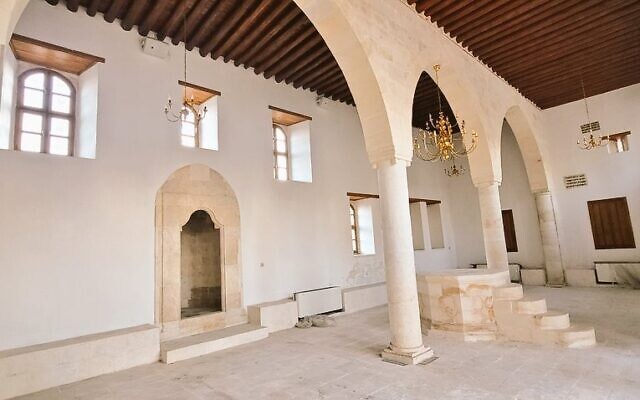 The newly-renovated synagogue in Kilis, Turkey as pictured on August 21, 2021. (Mendy Chitrik/ via JTA)

Erdoğan “wants this to appear magnanimous on Jewish issues so he can seem more humane,” said Raphael Sadi, a former spokesman of the Association of Turks in Israel, who attended university with Erdoğan.

Under Erdoğan, antisemitism in Turkey “is of a qualitatively different character than that of previous eras,” Rifat Bali, a Turkish author and publisher who has studied the subject for decades, wrote in a 2021 essay. He cited the veneration and promotion of openly antisemitic journalists and politicians by the Justice and Development Party.

Critics of Erdoğan’s conservative party, which has triggered a revival of Muslim nationalist sentiment as it cracked down on dissent in the media, the army and everyday society, say it is Islamist and fundamentalist. Erdoğan has rejected these labels, and he has recently spoken with Israeli President Isaac Herzog about hosting a warm diplomatic meeting. 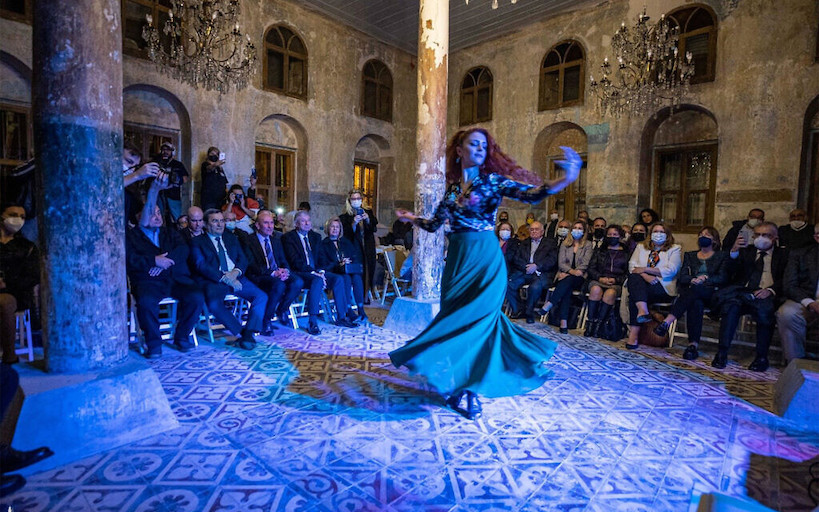 Today, only about 15,000 people who define themselves as Jews live in Turkey, almost all of them in Istanbul. That’s a 61% decrease from 1970, when Turkey had 39,000 Jews, according to a 2020 report by the Institute for Jewish Policy Research in London. Erdoğan rose to power in 2003.

Few of Turkey’s Jews are observant. Synagogue services are held under tight security for registered community members only. Random visitors are not allowed access to synagogues. Jewish communities in Turkey, almost all of them in Istanbul, tend to keep a low profile, also because of multiple terrorist attacks against them in recent years.

Following the State Department’s rebuke last year of Erdoğan’s perceived antisemitism, the Jewish Confederation of Turkey defended the strongman. “On the contrary, he has always been constructive, supportive & encouraging towards us,” the group said on Twitter.

Ishak Ibrahimzadeh, the Confederation’s president, declined to be interviewed for this article.

Rabbi Mendy Chitrik, the Istanbul-based chairman of the Alliance of Rabbis in Islamic States, said authorities seem sincere in their devotion to preserving Jewish heritage. 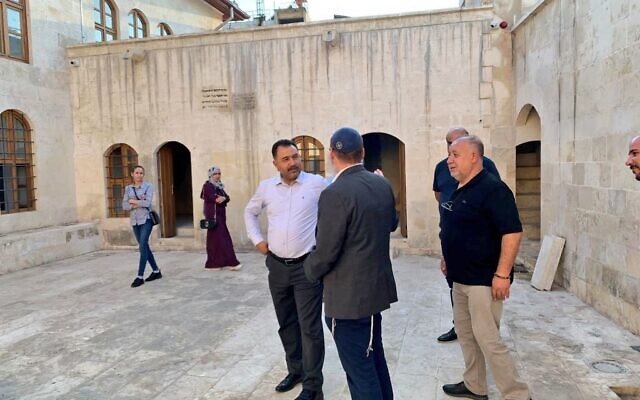 “As a rabbi who cares about strengthening Jewish life and persevering Jewish heritage, I am not concerned with political considerations,” said Chitrik, who attended the Kilis festival.

In Kilis, city and provincial officials “seriously and very sincerely care about integration in a city that’s 75 percent Syrian. They are caring and warm regarding their Jewish history,” Chitrik said.

One of the most-watched Netflix shows in Turkey is “The Club,” a Turkish-language series that features Jewish characters and customs. The series acknowledges a campaign by the government to marginalize and strip the assets of Jews, Armenian and Greek Christians during the 1940s.

In Izmir, the Jewish heritage push seems unconnected to Erdoğan. Under the Socialist mayor of the city, a stronghold of secular opposition to Erdoğan’s conservatism, renovations of the city’s long-neglected Synagogue Street, which hosts multiple houses of prayer, have been underway amid an effort to get the city on the UNESCO World Heritage List, Al-Monitor reported in September. 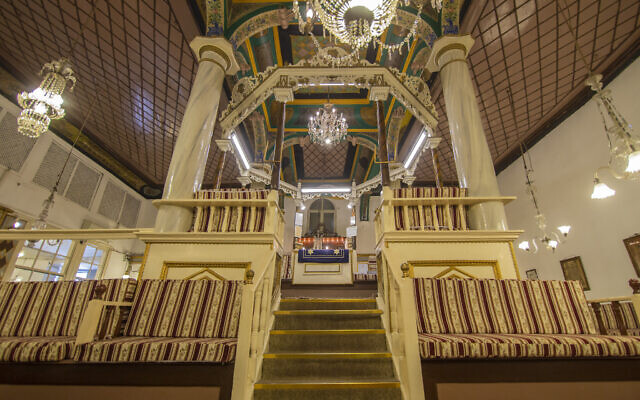 Erdoğan’s anti-Israel rhetoric and actions have scared off countless Israeli tourists, for whom Turkey had been a prime destination until 2010. That year, hundreds of Turkish and foreign activists sailed from Turkey to Gaza with the Turkish government’s approval in a bid to break the Israeli and Egyptian blockades on the Hamas-run Gaza Strip.

Tourism from Israel, which at that point was at about 550,000 entries annually, dropped precipitously. It reached those levels again only in 2019. Last November, Turkey held an Israeli couple visiting Turkey on holiday about a week on suspicion that they were spies.

The couple, both bus drivers, posed for a picture in front of a Turkish presidential palace. They were released following international pressure, but the episode may have a chilling effect on tourists.

Tourism is a significant aspect of the Jewish heritage push in Turkey, according to Yossef Ashkenazi, a 71-year-old Israeli who was born in Kilis. 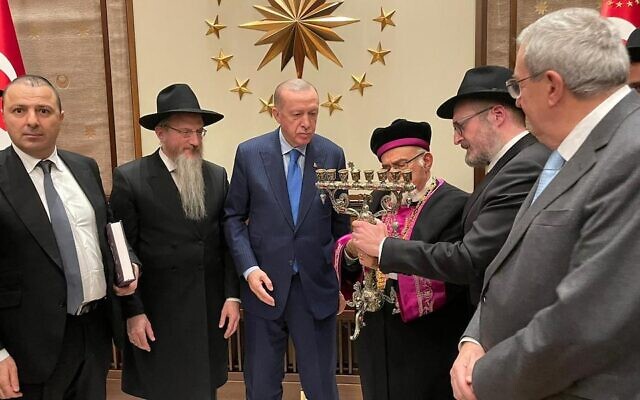 Illustrative: Members of the Alliance of Rabbis in Islamic States (ARIS) gift Turkish President Recep Tayyip Erdogan an ornate menorah on behalf of the Turkish Jewish Community during a meeting with the president in his Ankara palace, December 23, 2021. From left to right: Akif Gilalov, head of the World Congress of Mountain Jews; Berel Lazar, Chief Rabbi of Russia; Erdogan; Isak Haleva, Sephardic Chief Rabbi of Turkey; Rabbi Mendy Chitrik, director of ARIS; Erol Kohen, president of the Turkish Jewish Community. (David I. Klein/JTA)

“I think what we’re seeing is a mix of processes,” he said of the Jewish heritage revival in Turkey. “Erdoğan, who’s an antisemite, wants it to appear softer. But when that reaches the mid-level and the common man on the street, it becomes genuine. Jews are generally loved in Turkey, and there is a widespread recognition of how deep our roots go there and how they have contributed to Turkish society.”

Late last year, Ashkenazi visited Kilis’ synagogue for the first time since his family of Syrian Jews left decades ago. Ashkenazi became a bar mitzvah at the synagogue before it fell into disuse.

“It was just beautiful,” Asheknazi said of the complex, which has white stone facades and meticulously restored interiors featuring the structure’s signature broad arches. The synagogue’s 20-odd wood-frame windows overlook an interior yard with an octagonal well that has been turned into a fountain.

“I think the renovations come directly from Erdoğan’s office,” Ashkenazi said. “But I know for sure why it’s important for Turkish Jews and non-Jews alike: For both, it’s about knowing where we’re coming from. And it’s crucial for going where we want to go.”