On December 19th, 2018, veteran photographer Izzet Keribar was presented the 2018 Presidential Culture and Art Grand Award in Art/Photography category by the President of Turkey Mr. Tayyip Erdogan himself. Keribar has received numerous awards throughout his 65 years of career in photography. We talked with him about many things including this great honor, the digital transformation in photography, the time he served in Korea and his advices to his colleagues.
SHARE ON TWITTER SHARE ON FACEBOOK
January 13, 2019 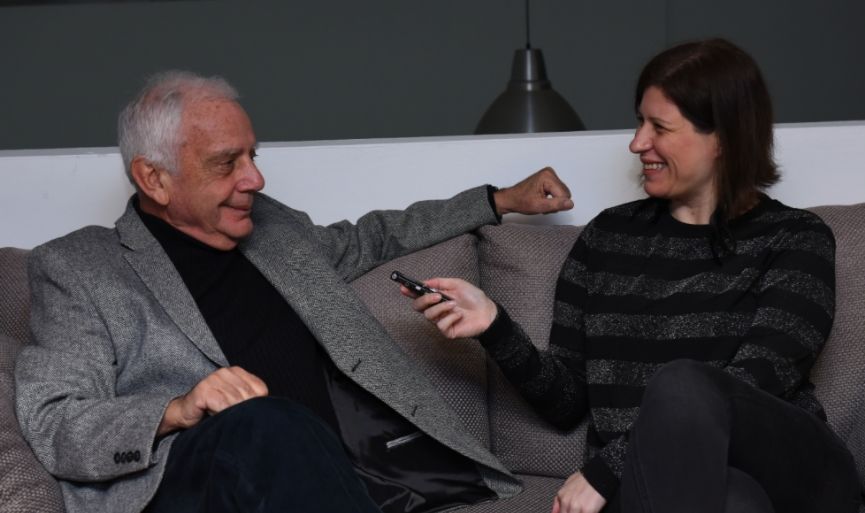 On December 19th, 2018, you had the honor of receiving the Presidential Culture and Art Grand Award in Art/Photography category from President Erdoğan. How did you feel?

I was very honored and proud at that moment, but the moment I felt really excited and surprised was when I received the initial call from the President’s Office 15 days before the award ceremony informing me about the award. This award was beyond all the awards I had received. It was the highest level of acknowledgement. On the day of the call, I was at my office. The voice on the other hand said, “We are calling you from the President’s office. My name is Iskender Pala. Our President has a message for you.” Then, I was informed that I was the recipient of Presidential Culture and Art Grand Award in Art/Photography category. Hearing this made my heart beat faster. After I calmed down, I first called my wife and children. I did not share this news with anyone else until it was announced by the President’s press office.

On the day of the Awards Ceremony, what happened? Did you have a conversation with the President?

There were two limousines waiting for us at the airport, in Ankara. Together with my grandchildren, we were a party of seven. At the entrance of the palace we were greeted by officials. Together with the members of judging committee and other award recipients, we were led to a waiting hall. Soon, Mr. Ibrahim Kalin joined us. Then we were told that the President was expecting us. We were then led to his office. He shook our hands. Then we sat around the table in a crescent shape. We talked about the Turkish National Anthem’s composition. When it was time for the Awards Ceremony, together with the President we went to the Grand Hall. Short videos about the backgrounds and resumes of each award recipients were screened. Before the ceremony, a TV crew from the President’s office had visited me and worked with me for two days.  They showed my photographs and my resume on the big screen. When it was my turn, I said that I thought I had received the biggest award of my life when I received an award from the Ministry of Culture, but the award I was receiving today was indeed the biggest award ever. I expressed my pride and honor. I thanked those who worked with me. I especially thanked my wife for allowing me to pursue this career which required major sacrifices. Of course, I also thanked our President and the members of the judging committee. I was very happy to see that Turkish Jewish Community (TJC) Leader Ishak Ibrahimzadeh, former leader of TJC Silvyo Ovadya, Chief Editor of Salom Newspaper Ivo Molinas along with Bulent Eczacibasi, Levent Calikoglu and Gorgun Taner were present at the ceremony in Ankara.

“I OWN A PHOTO ARCHIVE CONSISTING OF 1.5 MILLION PHOTOS”

You always talk about owning a wide archive. How many photos are there in your archive? How do you preserve them?

In total, I have 1.5 million photos in my archive. There are closets full of negatives and 35 mm medium slides. I have 2,000 binders, nylon bags, and a DVD archive. In the last few years, I started storing my photos in hard discs. I also have two books in the making. One of my books is sponsored by the State. It includes photos of old Istanbul, the photos I took in 1950s. Everything is ready. The foreword, the footnotes… The second book is Colored Turkey. Books are very significant for an artist. Everything flies by, but with a book you leave your mark.

“THE THOUGHT OF BEING AWAY FROM PHOTOGRAPHY MAKES ME UNCOMFORTABLE”

Did the digital transformation in the last 20 years affect you?

When in the early 2000’s digital photography became a reality, I was quick on the draw. This transformation did not challenge me. I adapted pretty well. I learned Photoshop, quickly. But, today, it’s not the same. Tourism declined, smart mobile phones emerged. These were developments that disrupted our business. The need for professional photos declined. Competition increased. Today, cost affects decisions rather than quality. But, one thing is still a fact: as someone who has been taking photos in Turkey for 65 years, I have contributed to this profession. After I have earned my place in the business and made a name for myself, I made it my goal to popularize photography in Turkey. I gave lectures, trainings; attended events/competitions as member of the judging committees; I took photos of Turkey’s natural beauties, historical landmarks and people to promote our country to the world.

You say that you are 80 years old and people also respect your age. Do you ever think, now is the time to lay back and rest?

I do not ever think that. I plan on staying active for many more years. The thought of being away from photography makes me uncomfortable.

“KOREA IS THE DARK ROOM OF MY PHOTOGRAPHY LIFE”

You served your time in the military in Korea and you shone out with your talent in photography. How did this affect you?

Korea was very far away from home. It took a month for a letter to be delivered. You feel lonely at such a place. When you are alone, you feel vulnerable. You may have some confrontations with other people and your superiors you cannot get along with. I was serving as a translator.  I took photos as well. That’s when I realized this profession was starting to earn sympathy. Colonels, squadron leaders, the CO would come to me asking me to take their photos. In time, the I got in my CO’s good graces and became his personal translator. We went to Korea in case a war outbroke. We stayed in tents. Cold, hot, rains, accidents… I have a photo collection from my time in Korea. It’s very important. It documents a certain era.

Can you say your days in Korea were the dark room of your life? In fact, we can say that your photography life which you pursued with great passion was born there.

Yes, it was born there. I was as excited as I am excited, today. But I never thought that photography would one day become my profession.