TURKEY  PAST AND PRESENT 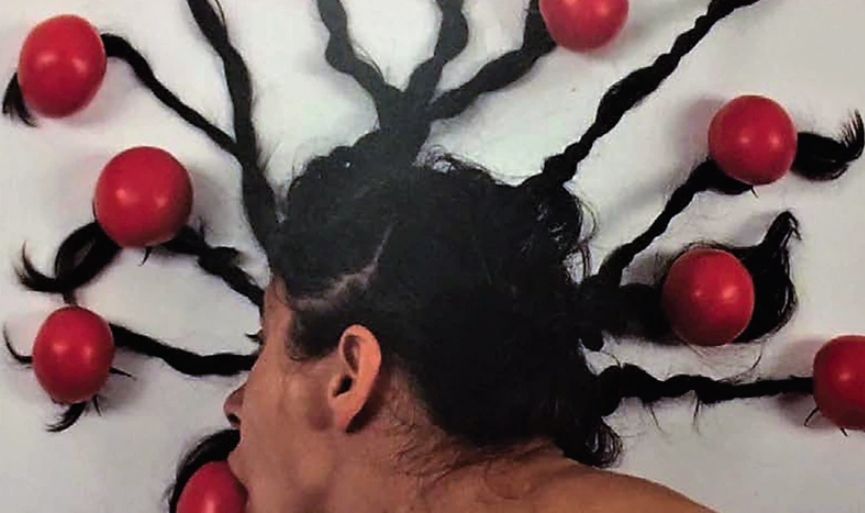 The show goes by the title of Roots and Growth: Traditional and Contemporary Art from Turkey, and much of it addresses the clash between new and old, the seeming incongruity to Turkey’s basically Eastern historical and ethnic backdrop, and its enforced conversion into a Westernized society. In the aftermath of defeat in the First World War, and the final collapse of the Ottoman Empire, Mustafa Kemal Ataturk created the modern Republic of Turkey, and introduced sweeping reforms in all areas of life, which included changing the Turkish alphabet from an Arabic-based script to Latin lettering. Ataturk himself was a heavy drinker, and in fact, died of cirrhosis of the liver. Women’s status was also radically changed. “There was the idea of the ‘republican woman,’ whereby she had to go out and work and be part of the Turkish workforce,” explains Laor-Sirak.

While noting the political subtext of the exhibition, Erel prefers to focus on the historical side of the project. “It is not directly about current politics [in Turkey],” she notes. “It is about the culmination of the first 100 years of the Republic of Turkey, and how it came out of the Ottoman Empire. It is not only talking about the recent years, about political parties and the current situation.”

Erel says the idea was to consider Turkey through the prism of various ethnic and cultural strands that run through modern Turkish society. “It was really interesting for me to see the artists’ contemporary artworks engaged with the traditional carpets and other ornamental objects in the [museum] space, juxtaposed together, because of the way they are using traditional cross-media in a contemporary context is not directly talking about today. But it shows a clash of the last 100 years, of becoming a nation-state.”

The East-West conundrum comes across graphically in Internal Affairs by Fatih Aydogdu. Aydogdu is visual artist, designer, sound artist and curator who divides his time between Istanbul and Vienna. He focuses on concepts of media aesthetics, migration and politics of Identity, and linguistics issues.

Internal Affairs is an alluring work comprising two conjoined ouds. The oud is an ancient, lute-like instrument which is common to the Middle East and North Africa and, as such, represents Turkey’s Eastern roots. However, Aydogdu’s work has the oud necks pointing in different directions – seemingly, one to the East and the other pointing westward.

That may be a cultural inference however. In fact, in Internal Affairs, Aydogdu’s primary line of intent, as the curators note, “alludes to political censorship in an era of fake news on which politicians rely and take pains to disseminate.” Wonder what Mr. Trump would make of that. Exhibited in a glass showcase, and with their strings inaccessible, the instruments are rendered unusable. They have become silent sentinels of an endangered art form.

Turkey’s cultural-artistic continuum, or the lack thereof, is conveyed throughout the Beersheba showing. It offers a glimpse of the current state of affairs there, as the country not only straddles Europe and Asia in a physical sense, it continues to weigh up its cultural options in an ongoing delicate balancing act.

“Traditional arts, such as miniature illustrations, calligraphy, rug-weaving and embroidery were not entirely abandoned,” Erel and Laor-Sirak explain in their exhibition notes. “They survived in the art departments of academic institutions, as well as in public schools and municipality-led education centers. However, Turkey’s international artistic identity was shaped by European art. The link between these two worlds is at the heart of public, political and cultural discourse in Turkey to this day.”

Roots and Growth feeds off a yin-yang perspective on several levels. Besides Turkey’s cultural-equilibrium equation, several of the exhibitors live all, or part, of their time elsewhere. And even the Turkish-based artists don’t all reside in Istanbul, the physical juncture between Europe and Asia. Does that, then, enable them to look in from the outside? To adopt a more dispassionate and clinical stance?

The German-bred artist is Nezaket Ekici, a no-holds-barred artist whose Living Ornaments image makes for arresting viewing. In fact, the picture comes from a performance work she has presented around the world, including in Tel Aviv, in 2012. The picture shows Ekici with her splayed plaited hair attached to the wall, and with a tomato at the end of each tendril. Erel posits that the artist wanted to obviate direct biblical Paradise references.

“Instead of using apples, like Adam and Eve apples, she uses tomatoes,” says the Turkish curator. The choice of vegetable may also have something to do dramatic effect. “When I watch the [Tel Aviv] performance documentation, it looks like blood when she bites into a tomato, there’s the juice everywhere. It looks like blood is coming from her mouth.”

There are more referential pointers in the exhibition texts which talk about the tomato as a linchpin of the Turkish agricultural sector, noting that “eating a tomato presents the artist as Eve, the primordial mother, who switches an apple for a tomato. Living Ornaments also connects with the Turkish tradition of weaving kilim carpets. There are several kilim in the exhibition.”

Erel says she was keen to anchor the exhibition in Turkey’s past, partly represented by the multi-hued carpets. “Root is also, for me, a reference to the kilim. You use root coloring to trace the lines in the carpets. We wanted to represent both sides in the exhibition – the traditional objects and craft objects – and there are contemporary art works as well. We have to address both sides equally. That’s why we called the exhibition Roots and Growth.”

‘Roots and Growth: Traditional and Contemporary Art from Turkey’ will run until January 2020. For more information, call 08-699-3535 or visit ine-museum.org.il.