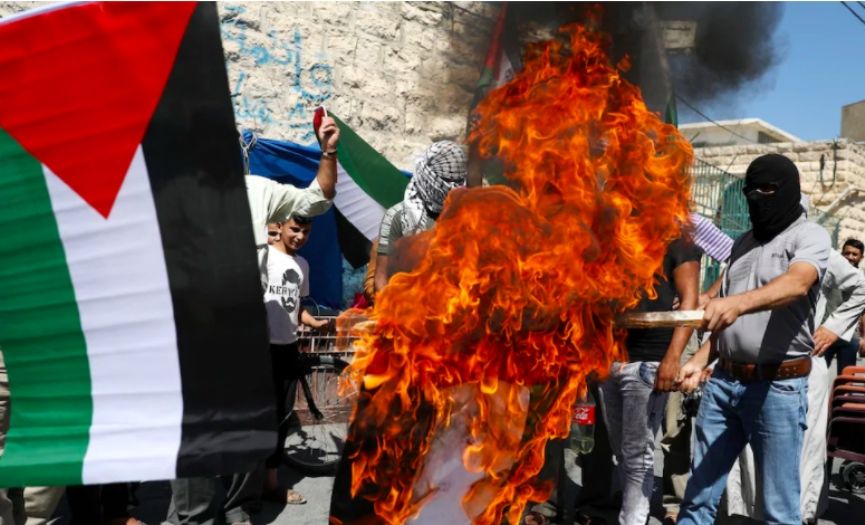 Recep Tayyip Erdogan, the Turkish president, has threatened to sever diplomatic ties with the United Arab Emirates and recall his ambassador after the Gulf state signed a peace deal with Israel.

"I gave an order to the foreign minister. I said we could suspend diplomatic relations with the Abu Dhabi administration or withdraw our ambassador," Mr Erdogan told reporters on Friday.

As part of the deal, announced by President Donald Trump on Thursday, the UAE would become the first Gulf state to normalise relations with Israel, which in return is expected to suspend its plans for annexation of the West Bank.

However, the historic peace deal  has laid bare tensions between the Middle East’s former imperial powers and youthful, oil-rich nations in the Gulf, with both Iran and Turkey strongly condemning the accord.

On Friday, Tehran condemned the UAE’s decision to normalise ties with Israel as an “act of strategic stupidity,” while Ankara said history would never forgive the Gulf state for its “hypocritical behaviour.”

"History and the conscience of the region's peoples will not forget and never forgive this hypocritical behaviour of the UAE, betraying the Palestinian cause for the sake of its narrow interests," said a statement by the foreign ministry of Turkey, which once led the Ottoman Empire.

"It is extremely worrying that the UAE should, with a unilateral action, try and do away with the (2002) Arab Peace Plan developed by the Arab League. It is not in the slightest credible that this three-way declaration should be presented as supporting the Palestinian cause."

Meanwhile a spokesman for the foreign ministry of Iran, the former Persian empire, said: "The oppressed people of Palestine and all the free nations of the world will never forgive the normalising of relations with the criminal Israeli occupation regime and the complicity in its crimes.”

It also emerged on Friday that the Israeli security agency Mossad is due to lead a delegation to the UAE for further discussions on the deal.

Under the terms of the deal, Israel agreed to suspend controversial plans to annex parts of the West Bank in return for a full diplomatic relationship and lucrative trade deals with the United Arab Emirates.

Forging closer links between Israel and Arab nations is a key pillar of Mr Trump’s strategy for the Middle East, and the diplomatic coup on Thursday could provide a major boost for US elections in November.

However, setting up diplomatic ties with Israel and increasing trade and cooperation in key security areas, such as Iranian regional influence, has also been a longstanding ambition for the UAE. 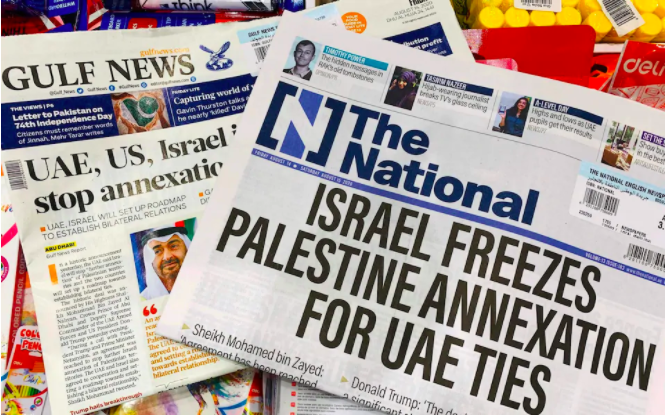 Image from Dubai shows the front pages of UAE-based The National and Gulf News newspapers with their headlines reflecting the announcements on the previous day as Israel and the UAE agreed to normalise relations in a landmark US-brokered deal CREDIT: AFP

In the coming weeks, Israel and the UAE are due to sign bilateral agreements on investment, tourism, direct flights, security, telecommunications, technology and energy, among other key areas.

Benjamin Netanyahu, the Israeli prime minister, described the accord as “the greatest advancement toward peace between Israel and the Arab world in the last 26 years.”

However, Palestinian leaders were bitterly disappointed by the deal, as though it temporarily removes the threat of annexation, they say it has damaged Arab solidarity on the Palestinian issue.

A senior Palestinian Authority official accused the UAE of a “despicable” betrayal that had further dashed hopes of any viable talks on creating a free Palestinian state.

It came as Oman, another Gulf state, said it stood by the UAE’s decision and hoped it would lead to lasting peace in the Middle East.

There is now fervent speculation about whether other Arab nations will heed calls by Mr Trump to follow suit.

Among those believed to be considering such a move are Bahrain and potentially Saudi Arabia, which cooperates closely with the UAE on foreign policy.