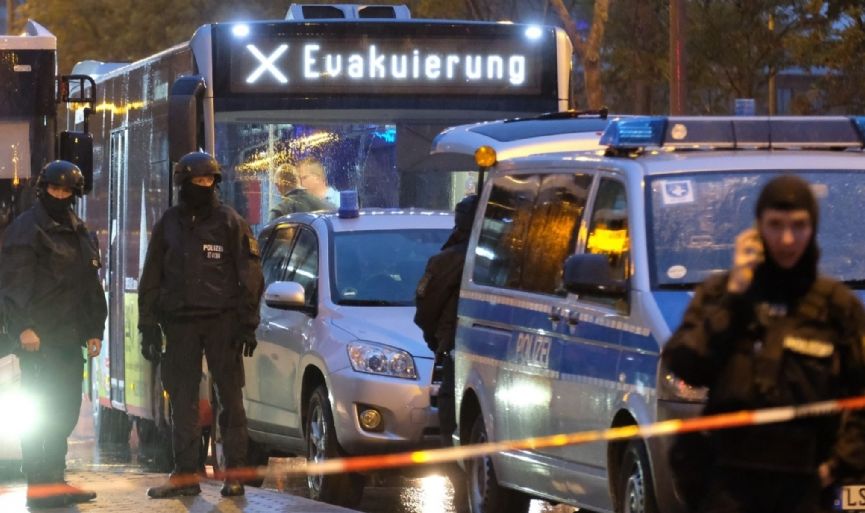 A bus with the inscription "evacuation" is escorted by police in Saxony-Anhalt, Halle in eastern Germany on October 9, 2019. Two people were killed in shots fired near a synagogue in Halle.(Sebastian Willnow/dpa-Zentralbild/dpa/picture alliance via Getty Images)

Two people were killed by a gunman who opened fire near a synagogue during Yom Kippur services and at a kebab shop in Halle, a town in eastern Germany.

The masked gunman reportedly was repelled by the synagogue’s doors, which were secured shut during the services Wednesday on the most solemn day of the Jewish year. There were 51 worshippers in the synagogue during the attack, including 10 American youths, according to The New York Times.

The gunman, who was reported to be a far rightist and livestreamed the attack, then shot a woman dead near the entrance to the adjacent Jewish cemetery and subsequently killed a man at a kebab shop.

The gunman, who has been arrested, posted his 35-minute video on the gaming platform Twitch before it was removed. He was dressed in combat gear with a helmet.

SITE, a private intelligence group based in the United States, said on Twitter that the shooter in the video said in English that the “root of all problems are Jews.” CNN quoted a German security official as saying that the ideology driving the attack was from the far right.

“My name is Anon and I think the holocaust never happened … feminism is the cause of declining birth rates in the West which acts as a scapegoat for mass immigration, and the root of all these problems are Jews,” he said in the livestream.

He has been identified by authorities as Stephan B., a 27-year-old German from the nearby state of Saxony-Anhalt, according to The Telegraph. He fled in a car and later tried to hijack a taxi before being arrested.

Security was increased at synagogues throughout Germany in the wake of the attack.

“The perpetrator shot multiple times at the door and threw a couple of Molotov cocktails, fireworks or grenades at it. But the door stayed closed, God has protected us,” Max Privorotzki, the head of the Jewish community in Halle, told Spiegel online.

The head of the Central Council of Jews in Germany, Josef Schuster, said the news of the attack and killings has “deeply distressed and frightened our community.”

“The perpetrator tried to enter the synagogue, and the neighboring Jewish cemetery was also attacked, so that an anti-Semitic motive is presumed,” he said. “The brutality of the attack goes beyond anything that has happened in recent years and is a profound shock to all Jews in Germany.”

He added that it was “scandalous that the synagogue in Halle was not protected by the police on a holiday like Yom Kippur.”

Rebecca Blady, a visiting rabbi in Berlin for Base, a Hillel program in Germany, with her husband, Jeremy Borovitz, had been invited with other guests from Berlin to spend Yom Kippur in Halle. After the holiday she posted on Facebook about the attack.

“It’s the end of Yom Kippur in Halle, Germany. We’ve made it out with our lives, in health, and amazing spirits — with gratitude to G-d — as today there was a large scale terrorist attack in Halle, and the terrorist began his day right outside the walls of the synagogue we were praying in,” she wrote.

She also wrote: “For whatever reason, the man with the gun was stalled or prohibited from entering the synagogue. G-d counted us all there today, one by one, as deserving of life.”

Following the shooting, the worshippers at the synagogue were taken to a local hospital to be checked for shock and trauma, Blady said, and they prayed the concluding Neilah service and blew the shofar there.

German Chancellor Angela Merkel expressed her condolences and “solidarity for all Jews on the holy day of Yom Kippur,” according to the BBC.

Israeli Prime Minister Benjamin Netanyahu said in a statement that “The terrorist attack against the Jewish community in Halle, Germany, on Yom Kippur, the holiest day of our people, is additional testimony that anti-Semitism in Europe is increasing.”

“On behalf of the people of Israel, I send condolences to the families of the victims and wishes for a quick recovery to the injured,” he said. “I call on the German authorities to continue taking determined action against anti-Semitism.”

“We are stunned and pained by the terrible anti-Semitic murders in Germany today, during the holiest and most important day of the year for all Jews around the world. I call on the leaders of Germany and the free world to bring the full force of law against anti-Semitism and its results,” he wrote.

World Jewish Congress President Ronald Lauder said in a statement: “It is appalling that on this day — the holiest in the Jewish calendar — when Jews are sitting in synagogues all around the world immersed in prayer, yet another attack against Jews has been perpetrated. We also need immediately to launch a unified front against neo-Nazi and other extremist groups, which threaten our well-being. The fact that, 75 years after the Holocaust, such groups are gaining influence in Germany speaks volumes.”