Why would 71 percent of Turkey see Israel as a threat? 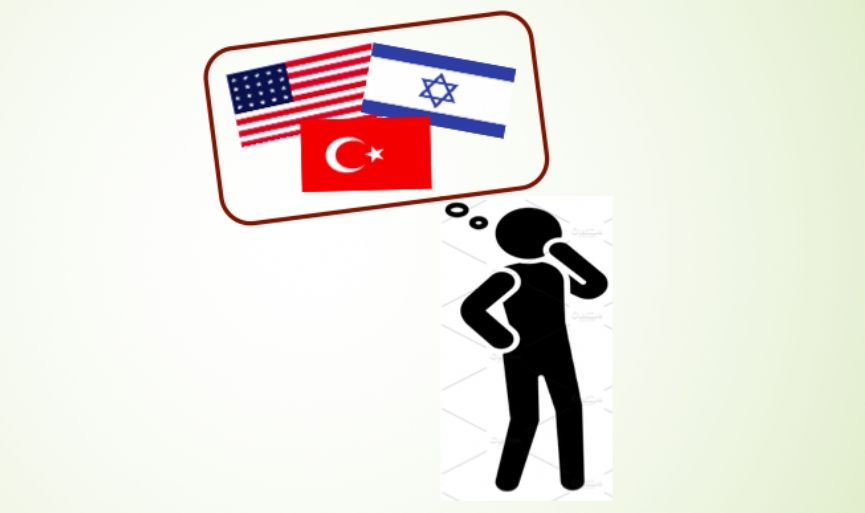 Did you know that 71% of Turkey is seeing the little country of Israel as a threat for themselves…?

The ‘Research on Public Perceptions on Foreign Policy’ which is conducted by Kadir Has University every year, has proved to be a precious study that definitely has to be evaluated, with the conclusions that have to be rendered upon and contradictions that have surfaced concerning some perceptions.

The research which took place from May 27th till June 20th, includes the answers taken from the interviews that were done talking face to face with 1000 people specially chosen to represent Turkey’s general average public according to their gender, age, and education level.

During the field research, Turkish people were asked questions about the events that shape Turkey’s foreign policy. The outcome was some perceived conclusions and preferences that might help shape government decisions and foreign policy decision-makers.

As for the political and cultural variety, the interviews that were conducted with the people defining themselves religious (27%), nationalist (23.5%), conservative (10.4%), Republican-Kemalist (18.5%), social democrat (9.5%) -and others- who were accepted as the average of Turkey, brought out the results with a -plus or minus- 3% margin of error.

Before examining the results, I’d better remind you that between the questioned 1000 people, the people who had never heard the word ‘patriot’ was 57% and the ones that didn’t know the terminology ‘customs union’ was 64%…

One of the most interesting results that came out was –without a doubt- the countries people saw as a threat to Turkey.

81% of Turkey is seeing the USA, our strategic partner and leader of NATO -which we are a member of- as the biggest threat to us. Whereas, this ratio was around 60 last year. It seems a bit hard to understand how we see the USA as the biggest threat when Trump, the president of the USA, acts kind and easy-going towards Turkey on every occasion. Moreover, in another question, the same people stating Turkey’s membership to NATO should continue with a ratio as high as 61%, should clearly tell us that our minds are really confused. Furthermore, the ratio of the people who believe that in the case of an attack towards our country, NATO -led by the USA who we see as a threat- will come to our help is 70%. To see a country both as a threat and a saviour... This should be a highly significant contradiction.

Another weird conclusion is that European Union countries, with whom we perform more than half of our foreign trade, are the third group of countries public sees as a threat to Turkey. Yet again, the percentage who want to get into the European Union being around 60, makes one wonder whether this threat perception is real or not.

Another vital question that has to be asked is how and by whom this threat perception about the western world is created and manipulated.

When there is no such evidence that Israel is threatening Turkey, when every day about ten commercial planes are flying from one country to the other, to be able to understand that it is hard to see, why this small country that has ten percent population in number when compared to Turkey can be such a big threat, is in fact easy.

History books, I hope one day will be able to talk about how certain influential centers are trying to spread western hatred, justifying it with the Israeli-Palestinian conflict and making Turkish people perceive Israel as a threat for themselves...

In an answer to another question, the percentage of the people wanting Turkey to act as a neutral negotiator in the middle eastern conflict was 40, thus it can be seen that about Israel some of our citizens are quite mixed up. By the way, we should remind you that 50% of the people don’t want the relations between Israel and Turkey go back to being normal.

Another interesting discovery is the fact that the percentage who thinks Turkey’s foreign policy is successful is as low as 30%.

Acting on why one-third of the public sees even India which is located way across the ocean, as a threat to themselves, isn’t it time to ask “Where are we doing something wrong?” or to question our seeing-everyone-as-an-enemy state of mind.

In other words, why are we so mixed up?