The court sentenced one of the defendants in the provocation against Neve Salom Synagogue case to one-year imprisonment. Two years ago, a group of agitators had gathered in front of Neve Salom Synagogues gate for a provocative demonstration.
SHARE ON TWITTER SHARE ON FACEBOOK
April 19, 2019 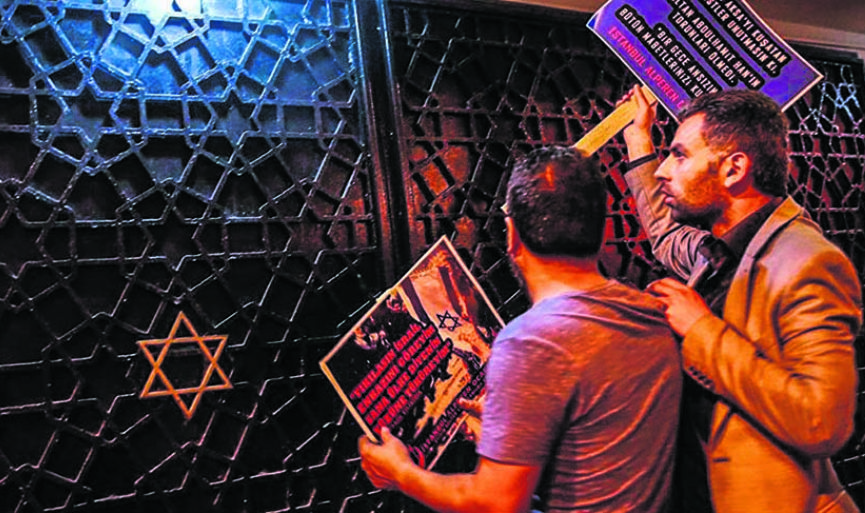 The first hearing of the trial was in January and the second was on April 16th at 50th Criminal Court of General Jurisdiction. The defendant Kursat Mican, who was at the hearing without his lawyer present, in his statement said that they organized this demonstration to urge Turkish Jewish citizens to not remain unresponsive to Israel’s treatment of Palestinians. Mican said that they had no intention of provoking hate and animosity and they had not done anything that would prevent worship. Mican asked the court for his acquittal.

In his statement Mican said that the people kicking the Synagogue’s gate seen in the CCTV footage which was reviewed after the incident were not affiliated with them. Also, he added that the people who threw rocks at the synagogue were not from their group.

While the court acquitted Mican for the charges, ‘for the purpose of creating public panic, abetting prevention of exercising the rights to freedom of thought and faith by committing threat offense and instigating damage to places of worship’, it convicted Mican for publicly inciting hatred and hostility. As per Turkish Penal Code article 216/1, he was sentenced to one year in prison based on the way the crime was committed, the place of offence, the severity of intent and motive. Furthermore, the judge ruled that due to the defendant’s personality, social and economic status and the circumstances leading to the crime, the jail time shall not be converted into a fine.

Since Mican has a criminal record and a prior conviction for three months of imprisonment, the court also ruled that suspension of sentence is not possible.

In the court record, Kursat Mican described himself as “single, no children, high school graduate, working at a car dealership with a 6000 TL monthly income and a Turkish citizen.”

On July 21, 2017, a group of agitators gathered in front of Neve Salom Synagogue’s gate for a provocative demonstration. At that period, following Israeli government’s decision to place metal detectors at the gates of Al Aqsa Mosque, Alperen Hearth’s Istanbul Director Kursat Mican and a group of his supporters gathered in front of Neve Salom Synagogue for a demonstration during which the group kicked the gate of the synagogue and threw rocks at it. The Chief Rabbinate Foundation of Turkey, Neve Salom Foundation and Human Rights Association filed a criminal complaint and the prosecutor’s office filed an indictment a year later.