15 Years Later, We are here, and we will not forget!

On the evening of Sunday, October 28th, 2018 members of Turkish Jewish Community filled the seats of Neve Salom Synagogue to say Hineni/ We are here and commemorate those who have lost their lives in simultaneous terror attacks targeting our synagogues, on November 15, 2003.
SHARE ON TWITTER SHARE ON FACEBOOK
November 13, 2018 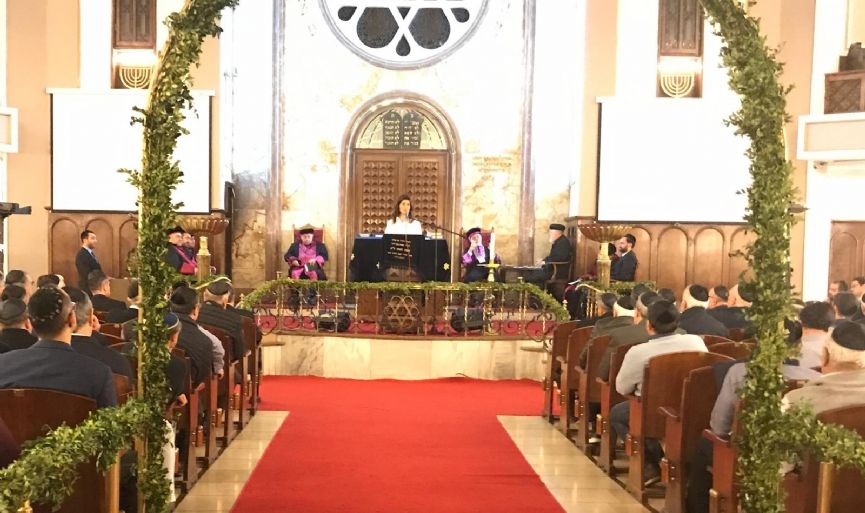 Grieving families and friends of the victims and hundreds of people who did not know the victims but wanted to pay their respects gathered in Neve Salom Synagogue to light candles and pray for the victims. In some ceremonies, words fail and the expressions on people’s faces say it all. This was one of those ceremonies...

At the entrance of the synagogue, there was a plaque with all the names of the people we’ve lost, inscribed. Under the plaque, there were candles forming the word ‘We are Here’. Before the ceremony started, everyone lit a candle until all the candles forming the word ‘We are Here’ were lit.  Before entering the synagogue, everyone received their commemorative gray bracelets. Limmud ceremony commenced after the recital of Arvit prayer by Chief Rabbi Isak Haleva, other rabbis and the young members of the Jewish Community.

The delicately framed traces of bullet marks and bomb fragments from the terror attack that targeted Neve Salom Synagogue on September 6, 1986 on the marble column at the top left corner of Ehal that houses Torah parchments reminded us of the people we lost at that attack.

On November 15, 2003 Neve Salom synagogue was hosting a bar mitzvah ceremony. On the same day, Sisli Synagogue was also hosting members of our community who were there for a celebration. Simultaneous bombings that targeted both synagogues shook our community, deeply. Several Jewish and Muslim citizens lost their lives at the attacks. Hundreds of people both inside the synagogues and outside, were injured. 15 years have passed since the attacks. As part of commemoration ceremony programme, there was a short documentary screening. The documentary by Eytan Ipeker which was narrated by Salvo Kohen was about November 15, 2003 attacks. The synagogue lapsed into silence during the screening as the documentary took the audience to the past.

After the screening, Rahel Layiktez gave a short speech. Rahel Layiktez lost his 19-year-old brother Yoel Ulcer, at the horrible attack. After 15 years, still trying to bind up her wounds, Layiktez had a hard time speaking, getting emotional at some points. After her speech, the pictures of people who died at the synagogue attack including Berta Ozdogan, a pregnant woman who lost her life at the gate of Neve Salom Synagogue, Yona Romano, Avram Varol, eight year old Annette Rubinstein Talu and her grandmother Anna Rubinstein who lost their lives at Sisli Synagogue and Dr. Yasef Yahya who was killed in his practice in an antisemitic attack were shown in a short presentation. Layiktez lit candles for all them. After Teilim, Nekamot, Misna and Kadish prayers were recited, Ehal door was opened and everyone prayed together for hate, discrimination and antisemitism to be erased from this world.

At the end of the emotional ceremony, the victims of Pittsburgh synagogue shooting were also commemorated.