9th of the International Ladino Day organized in Istanbul with many activities in Ladino language which is one of the most important elements of Sephardic culture, has been a great success.
Dora NİYEGO
SHARE ON TWITTER SHARE ON FACEBOOK
February 26, 2021 1570 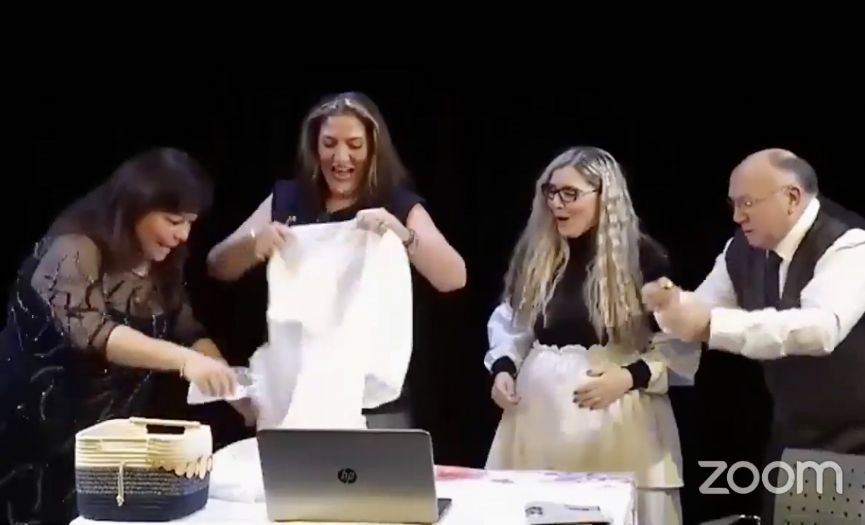 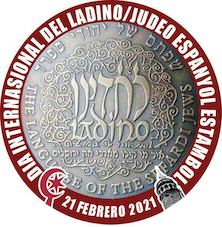 As known, every year since 2013 Ladino Day is celebrated in many countries of the world. The celebration that has also been ongoing in Istanbul since 2013 was realized via Zoom this year due to the pandemic.

The day organized by the Sephardic Cultural Research Center is usually celebrated with the activities organized in the Ladino language. For the last few years, the activities in UÖMO (Ulus Jewish Schools) have lasted an entire day, as opposed to other countries. Also, during lunch Sephardic food, at teatime ‘borekitas’ and ‘boyikos’ are served. We had longed to continue as such again this year. However, even the pandemic could not stop us celebrate; we can even say that it conduced to a bigger celebration.

The members of the Sephardic Cultural Research Center, succeeding in turning the disadvantage the pandemic created for these kinds of events into an advantage, announced to people all around the world that this year the event would be organized via Zoom, thus having thousands of people as audience that day.

In the 3-hour program where activities such as film, theatre play, songs, cooking took place, there were also participants from the USA, Argentina, England, and Israel.

The program started with a video introducing the participants presenting the activities of the day, along with the song ‘Kanta Las Sardelas’ that has become the traditional song of Ladino Day. Following this, the president of the Sephardic Cultural Research Center Silvyo Ovadya, and the Coordinator Karen Gerson Şarhon made speeches summarizing the importance of Ladino Day. 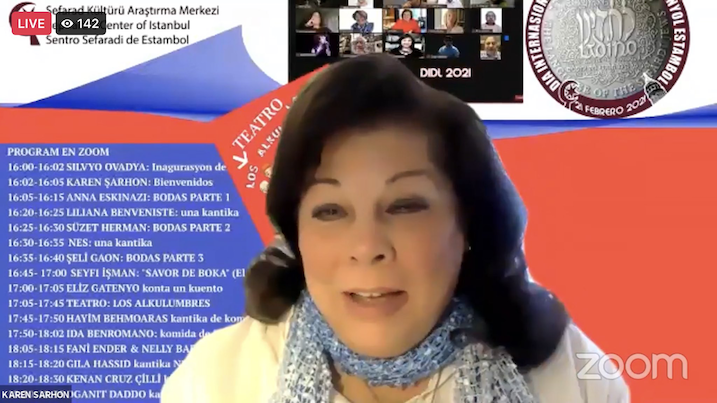 Karen Gerson Şarhon who presented the whole program, impressed all the audience with her humorous and fluent way of speech.

Anna Eskenazi, Şeli Gaon, and Suzet Herman who participate in the Ladino Day with a topic of their choice, this year chose ‘Bodas (Weddings)’. Anna Eskenazi told us about her son’s decision to marry an Indian girl, their wedding in Calcutta, India, their celebrations including the necessities of Judaism besides the interesting Indian traditions, along with photographs from that day. Suzet Herman told us about a Muslim wedding they had attended years ago with her late husband, the thrilling moments they experienced because of a fight during the wedding with a humorous language. Şeli Gaon told us with a fluent Ladino about her cousin’s son’s wedding she had attended last year in Israel, and how different a wedding she got to witness compared to our weddings here.

Liliana Benveniste who participated from Buenos Aires, Argentina, translated a tango by Carlos Gardel into Ladino and sang it with her beautiful voice.

Chief Rabbi Isak Haleva, attending the program from his home, expressed how happy he was to see that Sephardic culture and the Ladino language that was about to be forgotten have started to be revived thanks to these precious works.

Coached by the great master Izzet Bana, the song ‘Arvolikos D’Almendra’ sung by the members of the Nes Sephardic Women Choir and the song ‘Buen Shabat’ sung by the Estreyikas D’Estambol Children Choir revealed the audience an important element of Ladino the ‘kantikas’ and the success of Izzet Bana in trying to keep Ladino alive with his works.

We felt deeply proud when the Spanish Ambassador Javier Hergueta and the Representative of Israel Consulate in Istanbul Ehud Moshe Eitam who have honored us with their presence in the event, made their speeches in Ladino.

Seyfi Işman whose work in the movie field is well known by all of us, presented the movie ‘El Treno de la Vida’ portraying the phases of human life, written by himself and showed it along with visuals, and as always it was very successful.

Eliz Gatenyo who told us about an incident she had experienced during a Shavuot Holiday when she was a kid, was admired with her lovely tone of voice, humorous language, and her fluent Ladino. 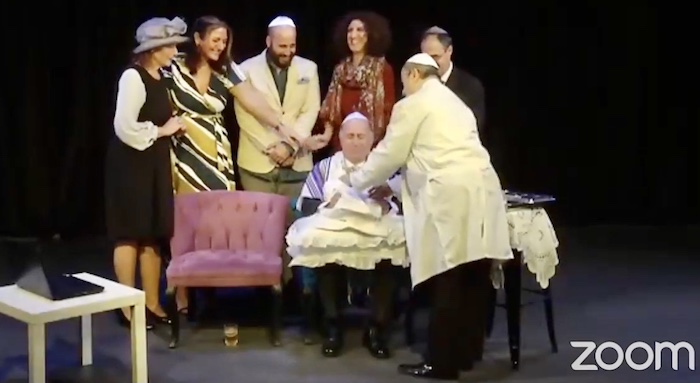 Our community's Amigos Ladino theater group performed the play ‘Los Alkulumbres’ written by Forti Barokas. During the wonderful musical show, while Forti Barokas was explaining our traditions such as Shabbat, Fashadura, Brit Milah, Pidyon, Mikveh, the actresses were realizing these traditions via Zoom, and Karen Gerson Şarhon was singing songs in Ladino relating to the topics.

Our talented friend Hayim Behmuaras who became the center of attention with the videos he prepared during the pandemic, sang a song in front of a table filled with Sephardic food, about how happy the meals that were eaten together as a family made a person.

Ida Barokas, our friend from Edirne, first introduced the ingredients of Köftikas de Abramila (Meatball with Plum) which is one of the Edirne Sephardic Foods, and then cooked it while explaining how to.

With the cheerful song ‘Nina’ written and sung by the Israeli singer with Thessaloniki roots Gila Hassid, the old ways of life of the Sephardic people came to life before our eyes. The singer had written this song for her mother and father.

The young Israeli singer Dganit Daddo participated in the program with her song Buketo. It was fascinating and promising to see young people interested in Ladino and songs in Ladino. 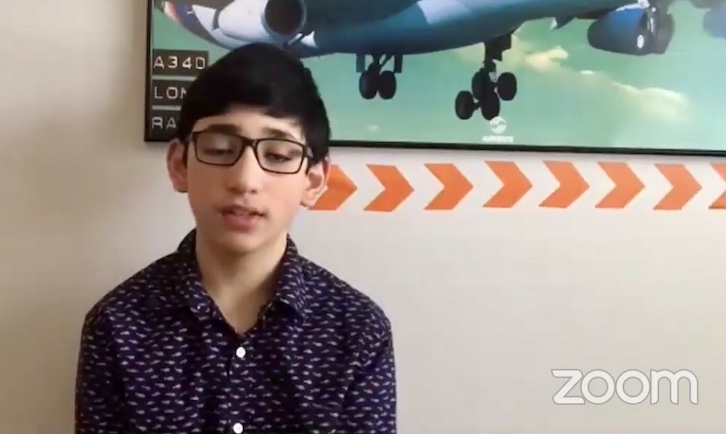 The way the 13-year-old Juan Santes who lives in Seattle, USA, spoke Ladino was admired by everyone. Santes expressed that he had a great interest in this language which has lived for more than 500 years, and that he had learned this language last summer.

Fani Ender and Nelly Barokas who are living in Israel also participated in the program. They talked about how the Association of Turks in Israel (Itahdut Yotsey Turkia BeIsrael) that had celebrated their 60th anniversary last August, is providing all the support and help to the people who are making aliyah to Israel, with a volunteering team presided by Ovi Gülerşen; they give Hebrew lessons, provide scholarships to students from Turkey, organize trips, conferences, concerts, and help improve relations with Turkey and Israel. 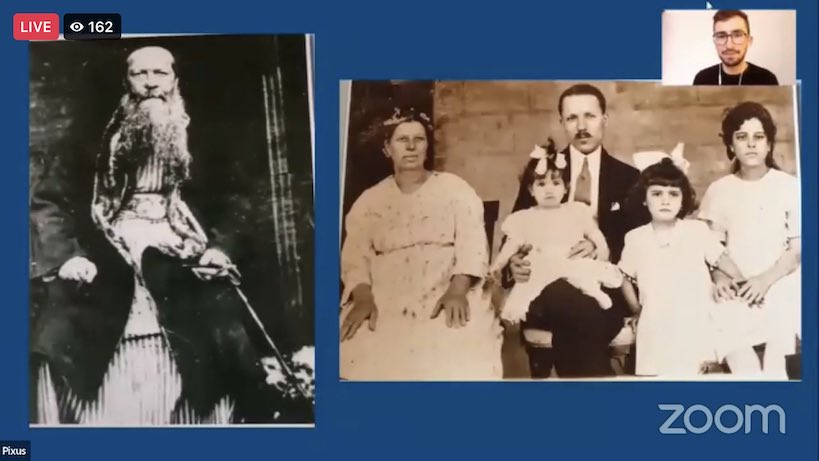 Our young half Turkish half Portuguese friend Kenan Kruz Çilli, who participated in the Ladino Day from Oxford, whom we also know from his articles in Şalom and El Amaneser, in his speech talked about the life of Rafael Moşe Pizante who was a Jew living in Antalya in 19th century. We were able to learn his life story from Kenan’s presentation he made using the old maps and documents he had found. It was also a very informative presentation to be able to grasp the historic Jewish life and cultural heritage in Antalya.

Besides the participants, we are also very thankful to the technical team Henry Çiprut, Alberto Modiano, and Yigal Sevindiren who worked really hard to prepare for this day.

The members of the Sephardic Cultural Research Center were very successful in creating a wonderful program, thanks to their self-sacrificing work. Our greatest wish is to be able to celebrate the next Ladino Day in a pandemic-free environment, in the UÖMO as always, with all-day-long activities, and delicious Sephardic food.