The Struma disaster, where 768 people of whom 103 were children, were killed when the ship was sunk to the depths of the Black Sea on February 24th, 1942, was commemorated officially once again.
SHARE ON TWITTER SHARE ON FACEBOOK
February 25, 2020 1463 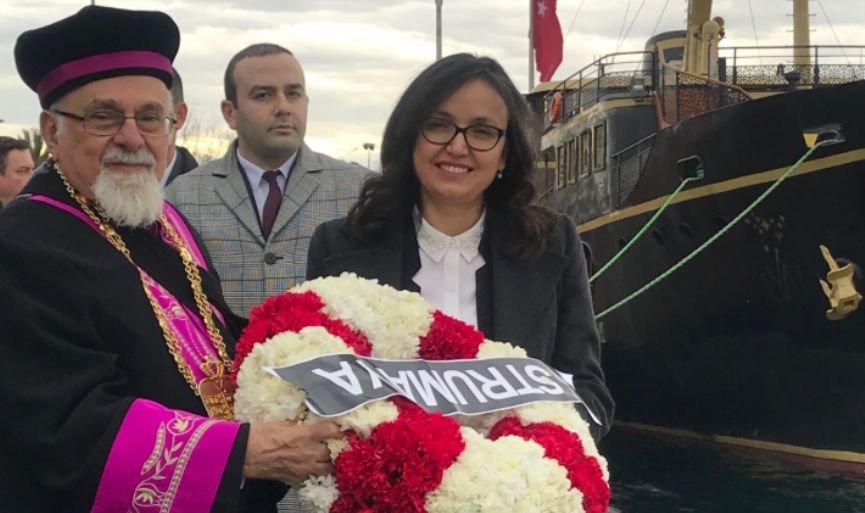 During the commemoration ceremony that was organized yesterday at the coast of Sarayburnu, representing the Turkish Jewish Community, Şalom writer Metin Delevi gave the opening speech:

"In December 1941, nearly 800 Romanian Jews boarded the Struma to meet their common fate; the youngest was 6-month-old Sorin Schwartz and the oldest 70-year-old Liza Glickman.

The Nazis were oppressing the Jews in the countries they were occupying, and they had started to slaughter Jews in Russia. The Romanian government had begun to enforce laws without waiting for the Nazis to arrive, and the Iron Guard had brutally murdered 4,000 Jews in the city of Iassy. Noticing that the coming days would be even worse, Romanian Jews were looking for ways out. Their goal was to reach Palestine via Istanbul. The 78-year-old Struma, which was used to transport animals and could accommodate up to 200 people, became the glimmer of hope for 800 people who could afford to buy tickets.

The 14-hour trip was covered in 3 days and they finally arrived in Istanbul. The ship had embarked way more passengers than she could carry, requirements could not be met; the weather was cold, and engines were broken. However, another nasty surprise awaited the passengers here: neither Britain nor Germany was permitting the journey to continue, and Romania did not want the passengers back.

The 70-day wait had started. The Red Crescent and Jewish Community of Istanbul tried to reply to their cries for help by sending them food. One of them was my father who was just 14 years old back then. He still remembers the helplessness he had felt. The hopes faded on February 23, 1942. Since the engines were not working, the ship was towed out to the coast of Şile. The next morning, a Soviet submarine torpedoed her, killing an estimated 768 refugees, making it the Black Sea's largest exclusively civilian naval disaster. Soviet submarine Shch-213, which sank the Struma, announced the disaster to its base with a single sentence:

“On the morning of February 24, 1942, we came across an unguarded enemy ship. The ship was successfully torpedoed from 1,118 meters. Young officers, ship commander, noncommissioned officers and the red fleet sailors who fired the torpedo showed exemplary courage.”

It does not make much sense to look for criminals or for the guiltiest to blame. As a Holocaust scholar once said, “During the Second World War, no country was clean-handed,” some hands were just a little dirty, some dirtier, but still these events need to be explored thoroughly and lessons need to be learned.

Commemoration ceremonies have a major purpose: to teach a lesson in order to prevent similar events from happening again. Will we be applying these lessons tomorrow? Will we witness a decrease in anti-Semitism, Islamophobia, xenophobia, in other words in “alienation” and denialism tomorrow?

Unfortunately, not. The vision of the 3-year-old Syrian, Aylan Kurdi who lost his life in 2015 on a similar journey of hope, still haunts us. Every single day, racist events are taking place in different parts of the world. Saying “never again” may not be the only answer. Therefore, it is necessary to strengthen these remembrance days with supportive education. We should understand that these events, which we all condemn and regret, do not happen out of the blue; we should find out which ways of thinking, which populist discourses, and what practices bring these results, and prevent the damages they may cause.

Regardless of their religion, their ethnic background or color, we vigorously need this, so that people live humanely, without being discriminated.

I would like to thank our state and especially the ministry of foreign affairs, for their initiatives to remember and commemorate this human disaster, and bow respectfully before the memories of the victims of the Struma and all similar racist policies."

Following Delevi, Istanbul Deputy Governor Dr. Hülya Kaya took the stand. After her beautiful speech full of emotion, Chief Rabbi Isak Haleva and Hazzan Rıfat Romi recited a prayer for the victims who lost their lives in the Struma disaster.

The ceremony ended with the laying of wreath and carnations to the sea by Chief Rabbi Haleva, Deputy Governor Kaya, Turkish Jewish community co-president Ishak Ibrahimzadeh together with the students of Ulus Jewish School.