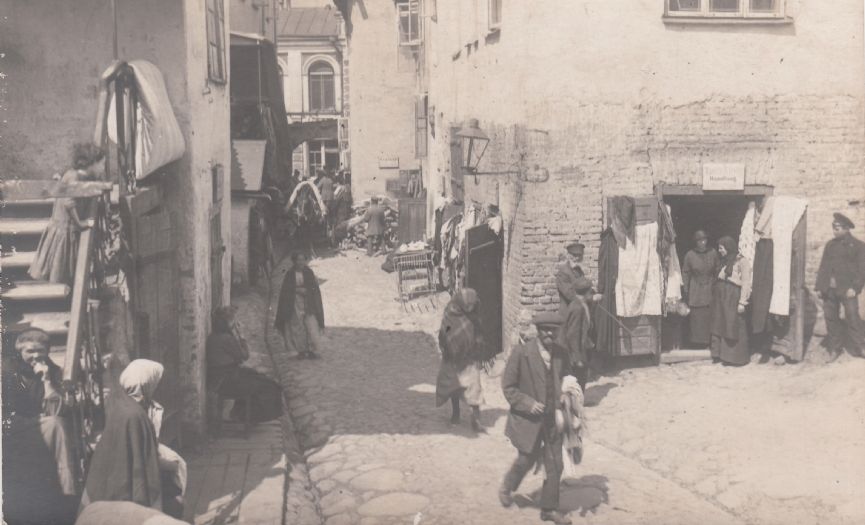 The collector František Bânyai, has been collecting postcards that highlight the Jewish theme, focus on the lives of Jews, the places they have lived, for 40 years with great work and patience. These postcards belonging to an era between 1899 and 1938, while reflecting magnificent lives lived within the society, the places, and a culture, are also depicting a world lost suddenly, without a trace.

The must-see ‘Jamim Mikedem – The Times Gone-by' Exhibition that came to life with the contributions of Jiří Čistecký, the Consul General of the Czech Republic in Istanbul, and through selection from František Bânyai’s postcard collection will be open for visit in the Schneidertempel Art Gallery until December 6th.

Postcards had been invented in the second half of the 19th century, and besides being a cheap and easy way to communicate, they also have been a source of information. Today, in an era where the internet and digitalization are so widespread that they have captured us, one wouldn’t be able to easily find postcards even if he/she wanted to.

The postcards in the exhibition have a special place as the final witnesses of an era. These remind us sadly how peace in fact is on a balance skating on thin ice, how especially in these stressful times we should ‘not be quiet’ about injustice if we value brotherhood and living together peacefully.

We talked about the exhibition with Consul General Jiří Čistecký. 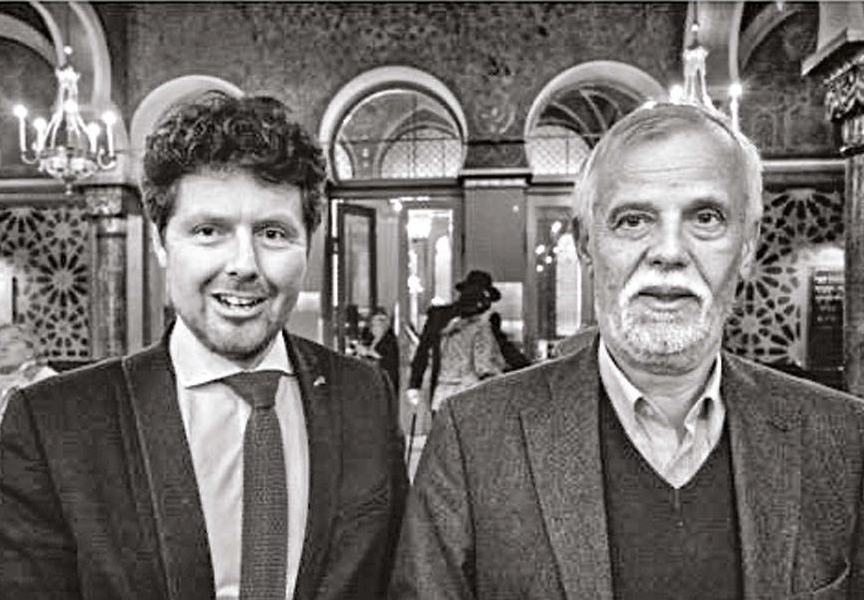 Could you please share with us how you made this exhibition happen?

This started many years ago when I was posted to Austria between 2003-2008. A good friend of mine František Bânyai has a unique private postcard collection and he introduced to me the collection. It is unique of its kind. At that time, I told him we should also show it abroad because it is of the vanished world of Central European Jews that does not exist anymore. Let’s say we have people among us, survivors who had been part of this era, this history is living only in their memories, the postcards, and a few museums. So, we decided to prepare an exhibition in Vienna. It was the first exhibition where a part of his collection would be displayed. We also invited artists singing Yiddish songs. The exhibition was very successful; many people visited the exhibition site. For more than 15 years we have been presenting the exhibition in many countries in Central and Eastern Europe. We also exhibited it in New York.

I would like to congratulate you for supporting such an important exhibition and your determination, especially during these difficult pandemic times. Why did you organize this exhibition?

Basically, there are two reasons for it. One is personal. From the professional point of view, artists are one of the most suffering group of people because they have been greatly limited in performing their art.

The second is the content of the exhibition. I think an exhibition like this was needed. As you may know in the previous years, racism, anti-Semitism is increasing dramatically in Europe and all around the world. This exhibition shows us how by a few small incidents the whole world can disappear in a moment. This is one side of the story: another side is that the people belonging to this wonderful culture and who had been murdered during the Holocaust were a part of the societies all over Europe. They always strived to make the countries they lived in better, more democratic; they helped industrialize the countries. They helped greatly the business world become a part of the culture, contributed to the scientific world, to their countries’ prosperity. Still, there are many myths about Jewish communities in social media and physical texts. They can be used even today for anti-Semite intentions. Most of these myths, in fact, are based on ignorance about communities. They only have access to fake news and to those who are trying to present the community as suspicious using old stereotypes that we have known for centuries. We wanted to reveal this to the society. 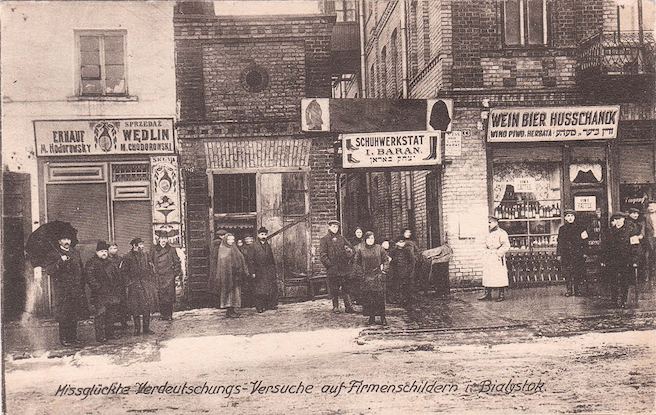 Can you tell us about the private postcard collection of Mr. František Bânyai?

František Bânyai is a very good friend of mine whom I’ve known for two decades. He is also the head of the Prag Jewish Community. He had started to collect postcards many decades ago. He has more than several thousands of postcards. These focus on Jewish cemeteries, synagogues, other Jewish sites, and daily Jewish life. The collection has mainly postcards of topographic nature presenting not only Bohemia and Moravia that are part of the Czech Republic but Europe as a whole. I mean the collection is primarily focused on the most crowded and culturally unique Jewish settlements in Central and Eastern Europe like Galicia, Ukraine, Lithuania, Russia, Poland, Hungary. Also, there are places that had been destroyed during the Holocaust.

Besides the collection’s generally being focused on Jewish culture in Central Europe, there are also postcards from Germany, France, and the Balkans such as Bosnia Herzegovina, Croatia, Serbia, Bulgaria, Romania. In this part of the world, these postcards are of the few evidences of the destroyed synagogues. During Kristallnacht, only on one night on November 9, more than 200 synagogues in Germany, Austria, and Sudetenland have been burnt and destroyed. There had been 50 synagogues in the territory called Sudetenland in Czechoslovakia under Nazi occupation. Out of those, only postcards remain now. 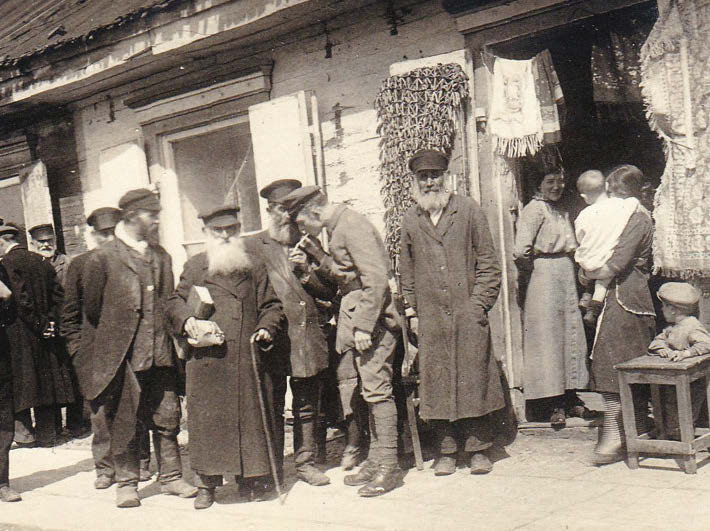 What is the importance of the postcards in the exhibition, to ensure that innocent victims’ names as well as their lives and cultures are never forgotten?

The postcards are one of the few pieces of evidence we have of the people who lived there. They are reminding us that the people once living together close to each other have suddenly changed; a part of the society turning to perpetrators and part to bystanders. In the process, only a few of the people have helped them to escape and saved their lives. When we commemorate the sufferings and say it will never again be lived, we mean not only the perpetrators of these crimes, but all the society.

This exhibition is also educational because every nation tends to present history in a rather ethnocentric point of view. Especially in my country, Czechia, Czechs, Germans, and Jews had lived together for centuries but if you look at the history books you see little how the Germans or Jews have contributed to the development of the country. We cannot achieve anything through war, hate, or the tensions we feel today. The consequences will be devastating. 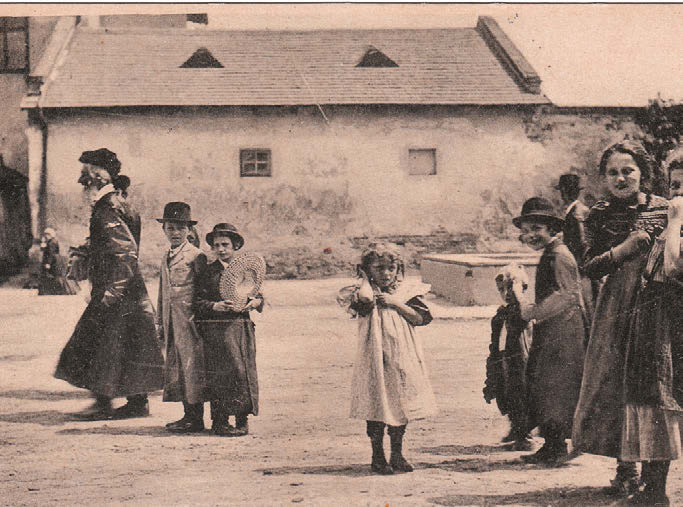 Another intention of the exhibition is connecting the past with today and the future, building a bridge of history. For example, and that is one example only, during the Kristallnacht pogrom, besides the paramilitary groups and SA troops involved, also normal civilians took part. Ordinary German citizens suddenly had decided to burn the Jewish schools, hospitals, synagogues, to kill the Jewish people without any reason. Similar things can happen today and are happening... We, through this exhibition, want to show that at the end of the day the consequence can be, the murdering of 6 million people, many buildings being destroyed and the only things remaining will then be the memories and postcards. We want to make people think about the present, remind them that their present neighbors might be of different origin, ethnicities, and different religions, just as it had been 80 years ago.

In which cities has the exhibition been before?

This exhibition was shown in Vienna in 2005 for the first time and since then it circulated all around Europe. I wasn’t always the person who was involved in organizing the exhibition, but I helped to connect František Bânyai with the other diplomats in the world. In the process, we saw the opportunity to open the exhibition in Germany, Ukraine, Macedonia, Hungary, the USA, and many other countries all around the world and realized it. After Istanbul we’ll take the exhibition to Izmir.

I’ll tell you an anecdote: When I was leaving for Istanbul, during the small farewell party held by the Israeli ambassador to Prag, people were telling me they had expected me to go to Tel Aviv, Germany or somewhere else and that they hadn’t understood why I was going to Istanbul. This was a difficult question to answer but the best answer came from the Israeli ambassador. He said, “Istanbul is halfway to Jerusalem, of course, he has to go there.” I convinced František Bânyai on this issue. Another reason why we decided to bring it here is that the Czech Jewish community is an Ashkenazi Jewish community and that there is also an Ashkenazi community living here. We wanted to present these postcards to the community here and to the rest of the society.