Im still furious! I cant stomach all thats happened. Killing people just because they are drawing caricatures for humor... This is not something a normal human being can comprehend.
İzel ROZENTAL
SHARE ON TWITTER SHARE ON FACEBOOK 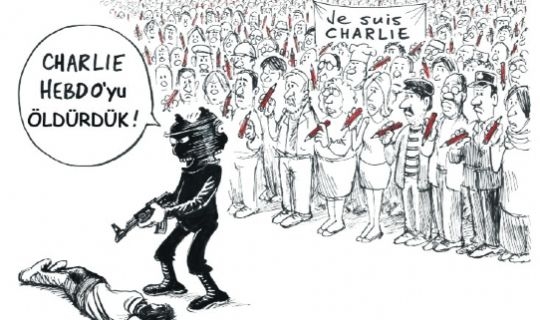 There’s no room for a “but” in this case! Yes, they were brats. They did not mind any taboos. They waged a war against bans. They were against symbols, they were scrolling through the borders of pornography and they were annoying the status quo. If I must confess, I too was disturbed by their violent perturbation. I am among those who believe that the right way to fight against ignorance is to fight against those who exploit it rather than mock or tick off the ignorant. It’s true; freedom of expression should know no boundaries. On the other hand, everything you do regarding people who don’t know they don’t actually know is to no avail! The fight must be against those who don’t teach them, who don’t want to teach them and who mislead them. But how? What could you possibly do to someone who responds to pens with Kalashnikovs? 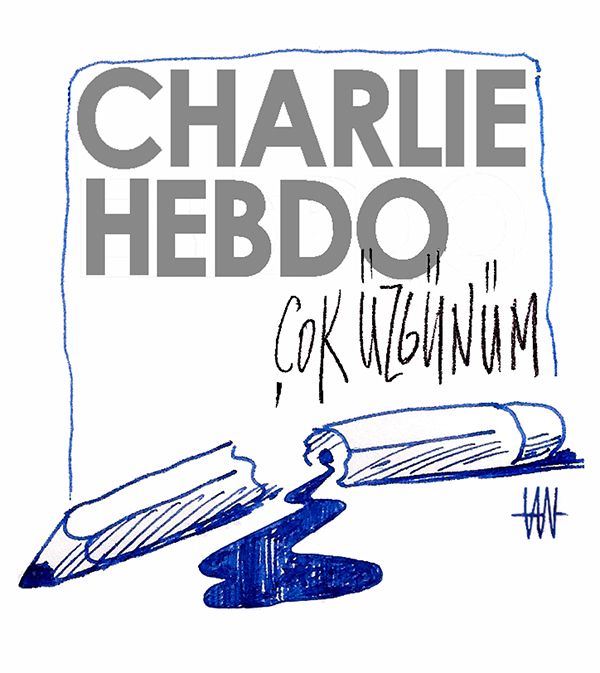 Tan Oral, Text: "I am so devastated"

Since January 7th, the world press is astir. Caricaturists declared mobilization; the American, European, African, Middle Eastern, Asian, regardless of their nationality, all of them protest against the attack with their caricatures, under the hashtag “JE SUIS CHARLIE”. On January 11, 1, 5 million people in Paris and 4 million in all of France were on the streets! Hundreds of thousands of caricatures are roaming across social networks. Charlie Hebdo Magazine which often printed 60,000 copies printed one million copies only in France, this week. This number does not include the number of copies the other countries printed to demonstrate their solidarity - Turkey among those countries. Charlie’s last issue was sold out and soon after that a black market quickly developed with copies selling on internet for a price up to 75,000 EUR. Will anyone buy it, no one knows. Of course, nothing can bring back those master humorists, but at least all of these prove that pen has more power against Kalashnikovs.

Most of my friends who called me after the attack asked me if I knew any of the victims. Does it matter if I knew them or not? Now, the whole world knows them. Last week at an article I wrote for Cumhuriyet daily, here’s what I wrote about them:

“Tignous (Bernard Verlhac) was my age and a member of ‘Cartooning for Peace’. Just like Semih Poroy, Piyale Madra, Ramize Erer and I, he was a part of an entity established by former UN Secretary General Kofi Annan and Le Monde illustrator Plantu in 2006 after the caricature crisis... He was among those who believed caricature was an important tool for improving peace and tolerance. He always had a timid but mischievous smile on his face. He used to say, ‘I am lucky because I live in a country where you can make a living by drawing caricatures.’

Wolinski, among other victims was the most well-known in our country. He came to Turkey many times. One year, he was the head of selection committee in Aydin Dogan Cartoon Competition. He was among those who lead the May 1968 movements in France with Cavanna, Siné, Reiser and Cabu. He was a leftist, but he mocked leftists, the most. He mocked them so much; he was sometimes accused of favoring rightists. In fact, in 1981 when leftists came to power with Mitterrand, some his friends recall him contemplating to retire saying he can no longer criticize the leftists… 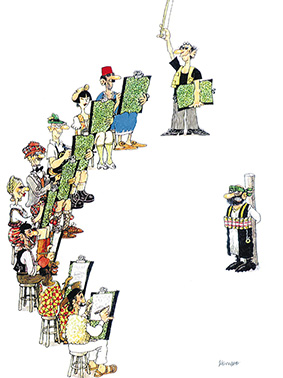 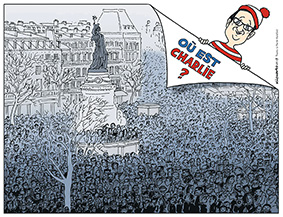 Cabu was an illustrator whom I admired since my early youth.  I was an eighth grade student when I first met ‘Le Grand Duduche’ character in weekly Pilot magazine, a shy high school student with long hair whom I slightly identified myself with.  I’ve been addicted to Cabu’s magnificent drawings, since then. When I met him in person after years, I was amazed by how such an artist with competent and harsh sense of humor could be so gentle and humble. He had another unique quality that amazed me even more: Cabu could perfectly draw the portrait of the one sitting across him at a table without ever looking at his notepad or pen. He would hide his drawing tools by placing them on his knees under the table!

I’ve never met Charb, who was Charlie Hebdo’s Editor in Chief. When he took up this position in 2012, I read one of his interviews and as a caricaturist I felt proud of what he said. One of the questions in that interview which became popular once again these days was ‘Are you not afraid?’ Charb’s answer to that question was, ‘I am not afraid of retaliation. I have no kids, no wife, no car, and no debts. What I'm about to say maybe a little pompous, but I’d rather die standing than live on my knees.’

There is a fifth caricaturist aside from the four I recalled above and in my opinion; not mentioning him is unfair to his memory. 74 year-old Philippe Honoré was one of the most competent illustrators at Charlie Hebdo. He had a unique style and sense of humor. When years ago, I showed one his works to my friend Turgut Ceviker, I remember his reaction was same as mine. He looked at Honoré’s caricatures featuring black taints with great admiration…

In social media there is a discussion that nothing could compensate these significant losses in the world of humor, that their places could never be filled and that no one could ever dare to be so bold. I wonder if they lived, how they would mock and taunt this horrific attack and the things written about them.