I was excited; this is the best word to describe my feelings that day. Every detail of the ceremony had been worked on for weeks. We were going to Ankara!
Karel VALANSİ
SHARE ON TWITTER SHARE ON FACEBOOK 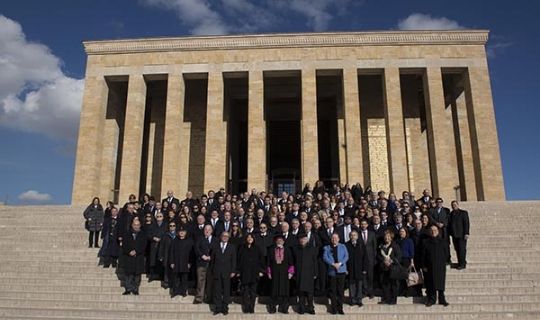 And to commemorate the Holocaust nonetheless, this was huge! The victims of the Holocaust were officially going to be commemorated in my country, as they will be in many other countries. And in Ankara, at the heart of Turkey!

We already have Yom HaShoah, a Holocaust memorial day in April according to the Hebrew calendar. In 2005, The United Nations designated 27th of January, the date Auschwitz-Birkenau death camp was liberated by Soviet Army, as an annual international day of commemoration in memory of the Holocaust victims. Holocaust International Remembrance Day was first commemorated in Turkey five years ago at Neve Shalom Synagogue. Last year the commemoration was held for the first time outside Jewish institutions, at Kadir Has University in Istanbul and this year at Bilkent University in Ankara. This year is also important because the Speaker of Parliament Cemil Çiçek would be attending the ceremony to honor the victims. This would be the first time the Turkish Republic will be presented in this ceremony with such a high ranking official.

Everything was perfect. The Minister of Foreign Affairs Mevlüt Çavuşoğlu, attended the ceremonies held at Auschwitz in Poland with 100 Holocaust survivors and world leaders. The Ministry of Foreign Affairs released an impeccable press statement: “We hope that every person develops an understanding of the Holocaust, which constitutes one of the darkest times of human history, and will consider the importance of working together so that such a tragedy, and the conditions that made this inconceivable crime possible, will never reemerge. However, we observe that anti-Semitism, which formed a basis for the inhuman Nazi ideology, still survives today and therefore we believe in the importance of fighting tirelessly against this phenomenon.”

Cemil Çiçek attended the Holocaust forum held in Prague and he was on his way to Ankara to attend the Holocaust remembrance ceremony thereafter. The atmosphere of the Jewish delegation in Ankara could be described as; 170 people full of optimism, hope, and sentiment of pride.

Our first stop was Anıtkabir. We first went for a visit to the mausoleum of Anıtkabir with a military ceremony to pay our respects and gratitude towards Atatürk, the founder of the modern Turkish Republic and we stood in one minute's silence to tribute him. I waited for the National Anthem of Turkey to be played but it didn't happen. Maybe it is not customary to play in this type of visits, I am not entirely sure. Our Chief Rabbi made a speech at the entrance of the museum and signed the Special Book before we visited the museum.

Our next stop was the Ankara Synagogue. They told us that the neighborhood of the synagogue is not very welcoming for the Jews, that we have to be organized in groups and move quickly. This is when I realized there were high security precautions around our buses and police officers were everywhere. I have to confess, I already have a paranoiac tendency. I shared everything we did and everywhere we went on twitter but, only after we had already left the synagogue. Just in case…

You have to see the beauty of the Ankara Synagogue. Even the cheap fluorescent lighting and old heating stoves could not ruin the splendor of the ceilings and chandeliers. The President of Ankara Jewish community Can Özgön told me that the roof is in need of an urgent repair. And I learned another devastating fact; Ankara Jewish community has no more than 30 members today, out of 3500 in 1948…

When we went out of the synagogue, I was afraid of the looks of the male dominated crowd on the street. I realized that it was true, we were not welcome here as we were informed before. I started to walk faster toward the bus. On the other hand I am used to this. In Istanbul every time a ceremony is held in a synagogue, there are announcements; “Don’t wait in front of the main entrance, walk away quickly once you are outside the synagogue.” It is nothing new for me.

After a lunch at Bilkent Restaurant, we visited Alberto Modiano’s photo exhibition “The Symbols of the Holocaust.” I noticed many army members and I found out that this is the first time they attend such a ceremony. The President of Bilkent University Abdullah Atalar, Dr. Umut Uzer from Istanbul Technical University, the President of the Turkish delegation for IHRA (International Holocaust Remembrance Alliance) Ambassador Ertan Tezgör expressed the importance of education in the fight against anti-Semitism during their speeches.

The President of the Turkish Jewish Community Ishak Ibrahimzadeh said that the best answer to the Holocaust, and all the other pains that humanity has been through, is to ensure that our children do not experience that. And he added, “We should walk together hand in hand, in solidarity, with the richness of our differences.”

The Speaker of Parliament Cemil Çiçek began his speech by saying that the Holocaust experience is the most concrete indication of what could happen when we loss human values. Every speech was translated to English in advance and it was reflected on the wall over the stage. During the ceremony I was also following this power point presentation out of curiosity just to see if there were any errors in the translation. During Çiçek’s speech I was checking the translation that in a moment I found out that the subject had changed, and there was no translation to that at all. He had started talking about Israel and Palestine and how this dispute stands in front of all Middle Eastern problems as well as the problems that we complain about in here. He continued to talk about Palestinian rights, Jerusalem, Al Aqsa, Gaza attacks and Mavi Marmara…

Wait a minute, aren’t we in a Holocaust memorial service?

The one that occurred 70 years ago in Europe, even before the creation of the state of Israel? The one where the Nazis used all their intelligence and all kind of technology just to construct death machines and factories? The one that the world chose to ignore until the last minute? Did not we talk about this tragedy during all this ceremony? Did not we emphasize how dangerous it is not only for the Jews but also for the humanity? And that we have to learn a lesson from this atrocity?

Was it necessary to emphasize the idea of “Every Jew equals Israel” even today? Don’t we have 364 other days and other platforms to discuss and try to find a solution to the problems of the Middle East, Gaza, Israel, Palestine, and the Mavi Marmara incident that torpedoed Turkish-Israeli relations?

Later on I saw the simultaneous translation in excellent English; “The rights and liberty of our Jewish citizens who are not responsible from the Israeli politics, but only share the same religious affiliation, are under our protection.” Can we sincerely trust these words?

The ceremony ended with a candle lighting ceremony for the 6 million who were taken out of their daily life, separated from their loved ones, became just a five digit number, forced to work and live in the upmost inhuman conditions, experimented on, and killed in cold blood. The words of our Chief Rabbi Haleva summarized all: “I hope our world will not witness such brutality ever again!”