After a Month in Hiding, Afghanistan´s Last Jew Arrives in Turkey 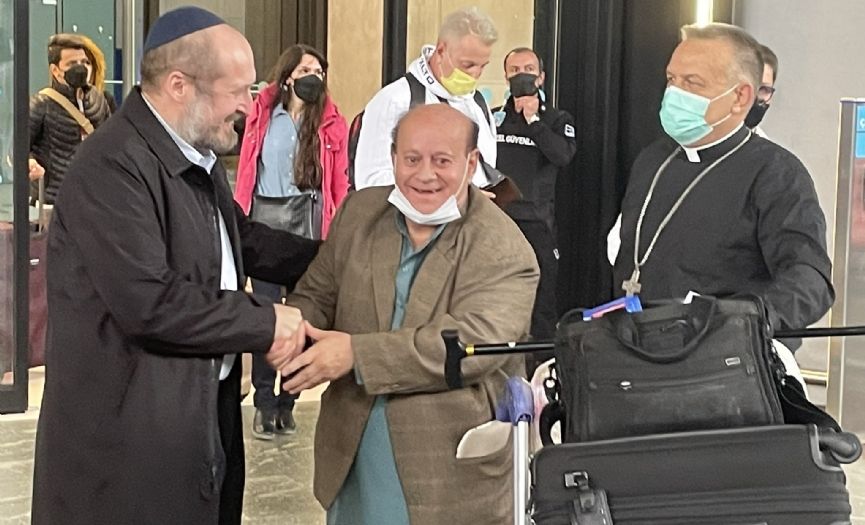 Zebulon Simentov looked tired but relieved as he exited the customs and baggage claim area of Istanbul’s new airport on the shores of the Black Sea Sunday morning.

It had been quite a trip from his home in Kabul, where he became a minor celebrity to the international media as the last surviving Jew in Afghanistan. He was a colorful symbol of a community whose history stretches back at least 1,500 years.

Though it was reported in early September that Simentov had finally left the country after the Taliban’s latest takeover, the details of how and where he had gone remained a closely guarded secret. The Associated Press reported on Sunday that he had been smuggled over land through to Pakistan and spent the past month in an Islamabad safehouse. But, like thousands of other Afghan refugees, he could not stay.

“We had to get him out because he did not have any legal status there,” said Rabbi Mendy Chitrik, the chief Ashkenazi rabbi of Turkey and director of the Alliance of Rabbis in Islamic States, who met him at the Istanbul airport. “The Turkish government has been very helpful in giving him a visa and securing his route to freedom.”

Simentov has previously expressed his interest in moving to Queens, New York, where he has some family. His two daughters and his ex-wife — who he has finally granted a Jewish writ of divorce after two decades of refusals — live in Israel.

Moti Kahana, an Israeli-American businessman who bankrolled Simentov’s operation, said he is working with Senate Majority Leader Chuck Schumer, a New York Democrat, to get Simentov permission to settle in the U.S.

I met Simentov when he exited the airport and tagged along to Chitrik’s home for a quick lunch before he headed off to his hotel. Depleted from the journey, Simentov, who is 62 and only speaks Dari, had little to say during the car ride, but he perked up later over the kosher food and the opportunity to put on tefillin for daily prayers.

Born in Afghanistan’s Herat province in 1959, Simentov had long refused to leave his homeland, even after he was imprisoned during the Taliban’s first stint in power in the 1990s.

An eccentric character, he lived in Kabul’s last remaining synagogue. For a time, Simentov shared the building with the only other native Jew remaining in the country, Ishaq Levin; they had a famously frosty relationship up until Levin’s death in 2005.

The Taliban’s resurgence in August didn’t frighten Simentov, he said during the car ride on Sunday. He has said in prior interviews that he was more worried about the groups in conflict with the Taliban, including the terrorists known as ISIS-K.

He even waffled about leaving as the U.S. military’s departure grew imminent. In an interview with Arab News, Simentov had originally declared that he would leave after the High Holidays in September, but when the time came, he refused to board a plane arranged by Kahana and Rabbi Moshe Margaretten, a Satmar philanthropist. The plane was instead used to rescue the Afghan women’s soccer team.

Kahana has a history of rescuing Jews — and others — from danger, including bringing the last Jew of Aleppo out of war-torn Syria in 2015. He had tried — and failed — to get the Israeli-American journalist Steven Sotloff out of Syria before Sotloff was murdered in 2014, and worried the same fate might befall Simentov.

Simentov relented — with one condition: rescue his neighbors as well.

And so Kahana arranged transport not just for Simintov, but also for 30 other Afghans, including many children.

Rabbi Chitrik had a condition of his own before agreeing to help bring him to Turkey: Simentov would have to grant his estranged wife the get, or Jewish divorce decree, she had long requested, to free her from the status of an agunah, or “chained woman,” which prevented her from remarrying under Jewish law.

Simentov agreed after more than 20 years of refusal, and the ceremony was performed over Zoom by the rabbinic court of Sydney, Australia.

The road to Istanbul

On his way to Turkey, Simentov was joined by Archbishop Robert Gosselin of the Continuing Evangelical Episcopal Communion Church.

Gosselin, a Florida native, is a longtime associate of Kahana’s and a former United States Marine who has worked on several evacuation operations in Afghanistan and elsewhere. Gosselin said it was clear Simentov was being hunted during his weeks in hiding.

“Where we were, there were groups of Muslim taxi drivers, who had Zebulon’s description and were searching for him,” Gosselin said. “We had him hidden, they did not know where he was, but when a Muslim got in the taxi they would ask if they knew where he was, to…”

Gosselin finished the sentence by sliding his finger across his neck in a throat-slitting motion.

“You’ve got the Taliban operating all over, you’ve got ISIS doing the same thing — I don’t know which group it was,” Gosselin continued. “They were very clear about their intentions.”

Simentov remained rather blasé about the danger he had faced, and appeared to be having a good day in Istanbul.

From the airport, he was brought to Rabbi Chitrik’s home, where he enjoyed a plate of kosher cheeses, after weeks of eating mostly vegetables while in the safehouse. 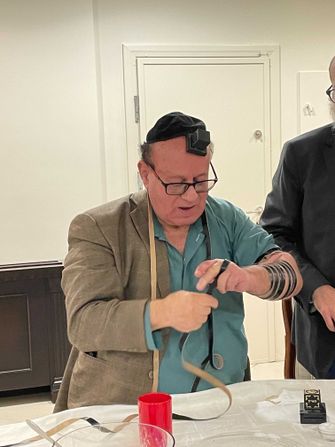 Simentov was excited when Rabbi Chitrik offered him the chance to wrap tefillin and recite the daily prayers. He commented that the leather straps of the tefillin were a little stiff, and suggested they could be softened with chicken fat, and was even more excited to hear that there were several kosher butchers in town where they might get some.

No longer is he the only Jew in the land.