From the Museum of Turkish Jews: ´Ketubah - Marriage Contract´ 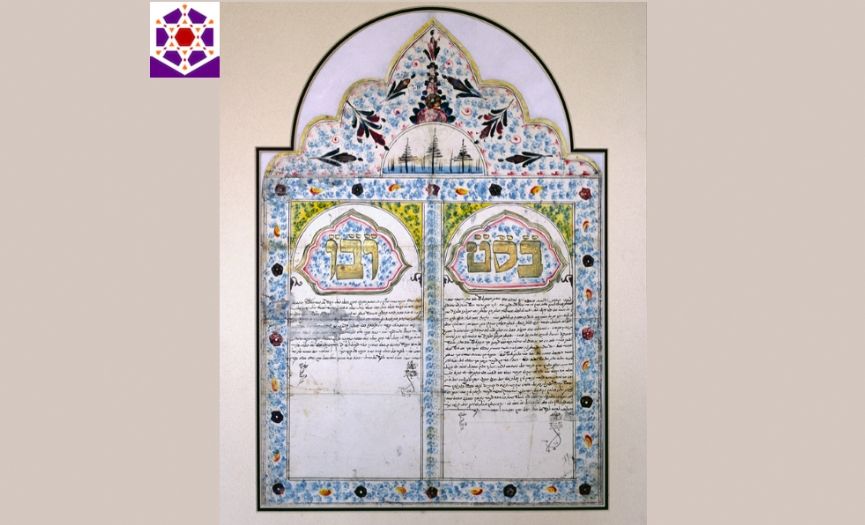 A 'Ketubah' is a marriage contract. It is considered an inseparable part of traditional Jewish marriage and it outlines the groom's rights and responsibilities concerning the bride. It records religious principles, the rights of the woman, and the man's financial responsibilities to his wife in the case of death or divorce.

On the 'Ketubah', the marriage date, bride and groom's names are written. The designs of the ketubot (plural for ketubah) are rather plain with a part of them decorated. They reflect the traditions of the cities they come from.

The design of the ketubah reflects the socio-economic status of the person who had it done. While the ketubot had been written on parchment in the 18th century, at the beginning of the 19th century most of them were written on paper. Parallel to this, decorations were reduced.

This 'Ketubah' is filled with impressionist strokes about the countryside, painted with pastel colors. It is characteristic to use stylized flowers and flower patterns. The ketubah in the image is from Tekirdağ, Turkey, dated 5615 (1855), and belongs to Mordehay Dekalo & Bulisa Pinhas Demotika families. It can be seen in the Ethnography section of the Quincentenial Foundation Museum of Turkish Jews.