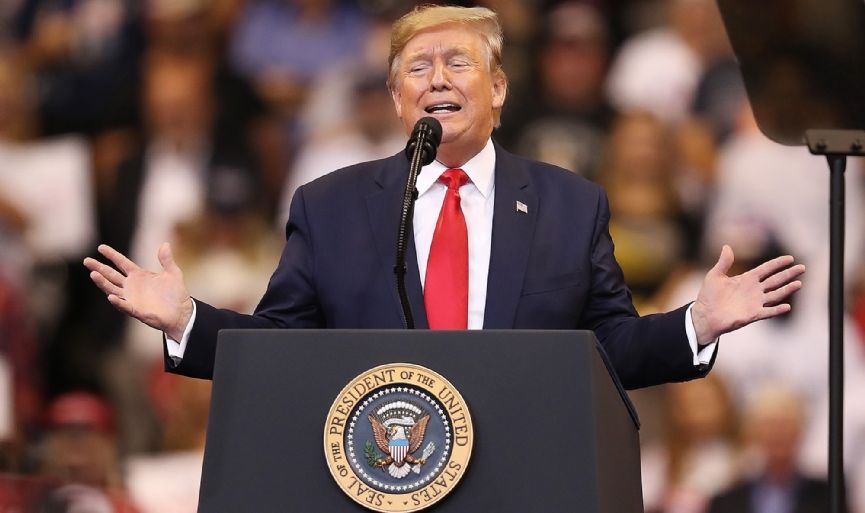 President Trump who has no qualms about being politically correct, draws the ire and animosity of "Politically sensitive" Democrats. He complains that whatever he says is cherry-picked, taken out of context and used against him in order to depict him as an Anti-Semite.

The trouble is that most of his detractors in politics, law or the media are democrat leaning Jews. President Trump accuses these for creating and disseminating “Fake news”.

The keynote speaker at the Israeli American Council 2019 National Summit which took place in December, was the POTUS himself Donald J.Trump. Trump provided both the rhetorical and factual support to Israel that none of his predecessors did to date. He was adulated by an enthusiastic audience chanting “Four more years!”. However, he also managed to trigger the “Highly Sensitive Democrat Jews” (HSDJs).

Below are some of the remarks that triggered HSDJs:

“You have people — Jewish people — and they are great people and they don’t love Israel enough,”

The President referred most probably to Jews who voted Democrat but objected to key achievements such as (i) USA’s recognition of Jerusalem as Israel’s capital, (ii) the annexation of the Golan Heights by Israel, (iii) USA’s withdrawal from the Nuclear agreement with Iran.

These Jews refrained as well from condemning fellow Democrat representatives who keep pushing for the BDS (Boycott-Divestment-Sanctions) measures against Israel.

By Pocahontas, Trump was lashing out at Democratic presidential hopeful Elizabeth Warren who fished for cheap sympathy by claiming Native American ancestry, proven at 1/64 to 1/1028 according to DNA tests.

Back in April, President Trump who fails to understand why Jews traditionally vote overwhelmingly Democrat, told reporters “I think any Jewish people that vote for a Democrat, shows either a total lack of knowledge or great disloyalty”.

The above rhetoric drove the Jewish Democrat voters crazy and provided them with enough pretexts for accusing him of racism and Antisemitism.

Whereas, when put in context, “Brutal killer” means “cold-hearted, cunning and ruthless businessman”, indeed not the best of attributes.

According to USA law insulting a belief is not a punishable offense. However insulting someone on account of his race, color or national origin is a punishable crime. Until now, since the Jews were recognized only as a religious group, they could not resort to court action when insulted.

Especially, for a considerable period, young Jewish students at American universities have been subject to Anti-Semitic harassment, discrimination, and violence on account of Israel’s policies.

In order to curtail that trend, President Trump issued an Executive Order on Combating Anti-Semitism as per December 11, 2019. Henceforth, Jews will be considered an ethnicity too, included and protected under Title VI.

Moreover, the Executive Order adopted the working definition of Anti-Semitism of the International Holocaust Remembrance Alliance (IHRA), which states, “Antisemitism is a certain perception of Jews, which may be expressed as hatred toward Jews. Rhetorical and physical manifestations of antisemitism are directed toward Jewish or non-Jewish individuals and/or their property, toward Jewish community institutions and religious facilities”.

Some HSDJs (Highly Sensitive Democrat Jews) contended that the “Freedom of speech” was curtailed by that Executive Order, that it sought to isolate Jews from the rest of the American Nation, and hence was Anti-Semitic.

The new Executive Order signed by President Trump revived a dormant controversy within the Reform Movement.

The Jewish Enlightenment Movement of the late 18th century triggered the partial modernization of Central and Eastern European Jewry, getting it acquainted with European values of enlightenment which prompted secularization, a revision of traditional religious practices and a redefinition of their perceived identity.

1.      The 1885 Pittsburgh Platform of Reform Judaism maintained that they no longer considered themselves as a nation, but only as a religious community

2.      The 1937 Columbus Platform of Reform Judaism, after the advent of Nazism, re-acknowledged Jewish Peoplehood and embraced Zionism

3.      The 1976 San Francisco Platform of Reform Judaism underlined the ethnic and spiritual bond between Diaspora Judaism and the State of Israel that was created

4.      The 1999 renewed Pittsburgh Platform of Reform Judaism declared its commitment to the survival of the State of Israel

The long way fared by the Reform Movement, pool of Jewish Democrat voters

The above-listed platforms indicate the Avatars of Reform Jews who rightfully couldn’t digest and internalize the radical changes brought by the leadership of the spiritual movement they belong to. Some members opted for Cosmopolitanism, Post-nationalism or Anti-Zionism; others for Zionism. Nowadays, Reform Judaism is split along those fault lines.

Although their vast majority are Democrats and agree on getting rid of President Trump, are they blaming him for the wrong reasons?