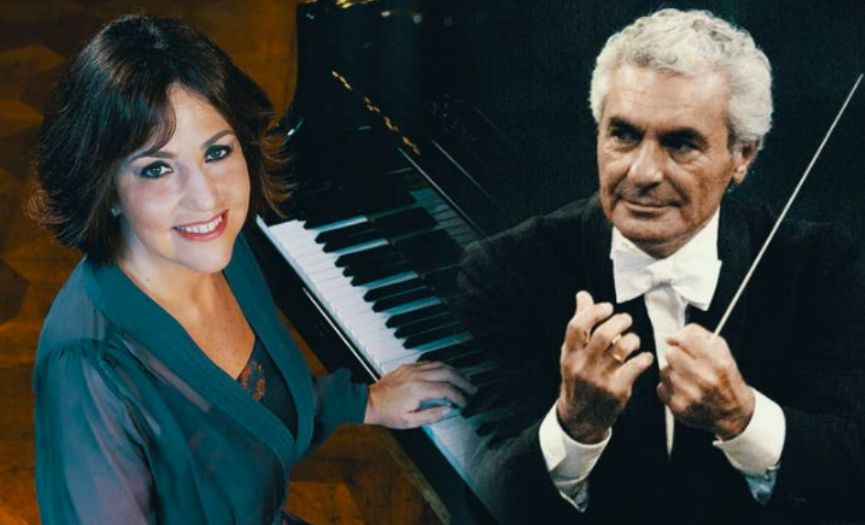 The renowned pianist, composer, soprano, and music therapist Renan Koen will perform the 'Hymns from Auschwitz' Concert at the Carnegie Hall in New York on April 20th. The creator of the project, Renan Koen, will be performing the concert together with the New Manhattan Sinfonietta conducted by Maestro Gürer Aykal, in tribute to Victor Ullmann and Michel Assael and in honor of Martin Elias. The 'Hymns from Auschwitz Concert' will be presented with the sponsorship of the Holocaust Memorial Tolerance Center of Nassau County.

Here are some highlights from what Renan Koen tells about the story of the 'Hymns from Auschwitz' Concert and how it came to be:

"Years ago, when I learned that the artists imprisoned in Theresienstadt had continued to make art, even though this was forbidden, I was very impressed. This compelling curiosity led me to conduct research on composers who lived there and produced works. What I initially felt for Theresienstadt was a sense of finality that deeply saddened me. However, after I received the works, I realized during the research and interpretation that, in this reality of confinement, the composers’ devotion to life, and their desire (and success) to convey what they lived through there to future generations and to document their reality through music had surmounted all kinds of obstacles. The highly ordered foundation they had received during their musical education served as, in my own words, “positive resistance” during their time at the Terezin concentration camp.

When I studied the works of Pavel Haas, Gideon Klein and Viktor Ullmann, whom I admire, I saw that these three composers were able to transform themselves, again and again, every single minute of every day through music, even in such a brutal and challenging environment. Although separated from their families and living in hostile surroundings, the discipline they each had previously developed and the instruction they received in creating their own “language,” including the traditions passed down in their extremely rigorous conservatories, and the demands of this type of education, revealed their positive resistance more strongly. Despite the overwhelming power of war and the destruction by Nazi Germany, they strengthened the cooperation and solidarity among themselves at every moment. They took care of themselves, the music, and the Theresienstadt culture in which they lived until the moment they were sent to Auschwitz or they lost their lives in Theresienstadt. In the following years, I felt and saw the same thing when I played the works of many composers whose music had been created in the same way in other camps and ghettos, providing solidarity through music.

As a musician and music therapist, the compositions I have been working on have prompted me to ask the question: “How can we hold on to the positive resistance that our talents impart to us and develop our own positive resistance?” With the strength I got from this question, I established an education program for young people, “Positive Resistance through Holocaust Reality,” which I have been directing since 2016.

The curriculum I designed affected the young participants deeply. The spark of curiosity I saw deep in the eyes of some of them prompted me to initiate and oversee the “March of the Music” student movement in 2016.

Since 2016, I have been collaborating with the Turkish Ministry of Foreign Affairs, both for my Holocaust concerts and my “Positive Resistance through Holocaust Reality” educational program. Held in important venues all over the world, at my specific request, on January 27, 2020 it was held at the United Nations, a very precious place for me. It was sponsored by the contributions of the Turkish Ministry of Foreign Affairs, the Turkish Consulate General in New York and our Permanent Embassy to the United Nations. That day, to my great surprise the legendary conductor Maestro, Mr. Gürer Aykal, whom I greatly admire, attended the event. In the following days, we decided to collaborate with the New Manhattan Sinfonietta, whose purpose and works I have been following with great appreciation. Dear Maestro may be unaware, but I witnessed many of his talks while I was backstage, waiting to congratulate him after his concerts. Most of these were marked by his desires for the continuity of orchestra and music for young musicians.

It is an immeasurable honor for me to be playing with the Maestro. Moreover, my heartfelt commitment to this project with the New Manhattan Sinfonietta Orchestra is especially meaningful to me. When we decided to hold our concert at Carnegie Hall, I consulted dear Maestro Aykal regarding the inclusion of an orchestral work by one of my March of the Music students, Elcil Gürer Göçtü, and he happily accepted it. Thus, I gave Elcil three musical themes from Greek Jewish experiences in Auschwitz, and he composed a magnificent work for Hazan, piano and orchestra, called “Hymns from Auschwitz.'' Hence, the title of the concert. Ottoman rooted Hazan Nissim Elnecavé and his student Ilker Nahmias are featured in this remarkable work, which I constituted for a Sephardic Hazan choir in New York a few years ago for my Jewish liturgical project.

As a musician, a Turkish Sephardic Jew, and someone who has been working on the Holocaust for years, on this night at Carnegie Hall I cannot express the extent of my gratitude to all who put this program together. I offer my deepest appreciation to everyone who walked this path with me and who became as one, united in this project, especially Deborah Assael, Joe Halio; Gürer Aykal, İbrahim Yazıcı, New Manhattan Sinfonietta and TAASNY; Andrea Bolender, Gayle Peck, Thorin Tritter and Meryl Menasche of HMTC; special thanks to Susan Halio for text editing and all of our sponsors, especially Martin Elias.

May the souls of all those who lost their lives in the Holocaust rest in peace.