President Recep Tayyip Erdoğan gave a speech at the reception he gave for the Alliance of Rabbis in Islamic States and the members of the Turkish Jewish Community.
SHARE ON TWITTER SHARE ON FACEBOOK
December 23, 2021 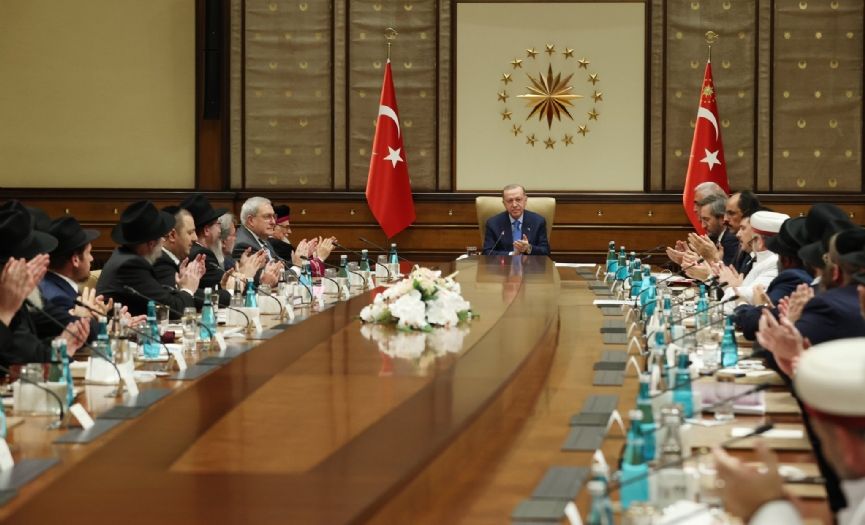 President Erdoğan made a speech during the meeting where he accepted the members of the 'Alliance of Rabbis in Islamic States' and the representatives of the Turkish Jewish Community at the Presidential Palace in Ankara. In his speech President Erdoğan said:

"Distinguished members of Alliance of Rabbis in Islamic Countries,

I greet you with heartfelt feelings.

Welcome to the Presidential Palace, to the House of our Nation.

I am very pleased to meet you all here.

I would also like to thank Mr. Ishak Ibrahimzadeh for making this meeting happen.

On behalf of myself and my nation, I sincerely greet through you, all Jewish citizens, along with our own citizens.

I believe that you will have the opportunity to personally witness Turkey’s rich culture, ancient history, and the climate of peace and tolerance of our country during your time here.

I am also pleased to learn that you got together in Istanbul with the support of the Chief Rabbinate of Turkey.

It is evident that Istanbul is one of the most significant cities for this gathering.

As you know, after conquering Istanbul, Mehmet the Conqueror invited the Jewish communities residing on both sides of the Golden Horn to Istanbul to improve the city’s cultural richness.

The Jews who came to Istanbul after acknowledging his invitation made a great contribution to this unique city.

Turkey has also been a peaceful haven for Jews, persecuted in various countries of the world throughout history.

We are a nation that embraced the Jews who fled the Inquisition in 1492.

The spirit that enabled the Ottoman Empire to welcome the Jews is still strongly alive today.

Thanks to Turkish Government’s determination and the ceaseless efforts of the Turkish diplomats, many Jews who fled the Nazi persecution during World War II were saved from being sent to concentration camps.

For centuries, we have always appreciated the contribution of our Jewish citizens in the development, progress and achievement of our goals.

We have not and will not allow inhuman ideas such as racism, antisemitism, intolerance to those of different religions to spread in these lands.

Turkey is the co-host of the International Holocaust Remembrance Day, adopted by the United Nations General Assembly in 2005.

Likewise, we were the co-host of the 2007 decision on the Undeniability of the Holocaust.

We became an observer member to the International Holocaust Remembrance Alliance in 2008.

We reject any approach that discriminates people because of their faith or their ethnic origin.

Throughout my political career of more than 40 years, I have clearly expressed my stance on this issue on every platform, locally and internationally.

I have never and will not allow daily political discussions to negatively affect our citizens of different convictions.

This meeting, which you’ve held at a time when intolerance is on the rise all over the world, together with the Covid-19 pandemic is crucial.

We need to act in solidarity in the battle against Islamophobia, antisemitism and xenophobia, that is rising especially in western countries.

In addition, we should all work together to strengthen peace and stability in the Middle East.

We never wish to see any tension, conflict or turmoil in this ancient part of the world that hosts holy sanctuaries of all three monotheistic religions.

Turkey’s greatest desire is to have communities of different religions, languages and ethnicities living together in peace in the Middle East.

Our warnings to the Israeli Government are to ensure that all issues are dealt appropriately for a long-term peace and stability in the Middle East.

Actions to be taken on the Palestinian issue, especially on Jerusalem, will contribute to the security and stability of not only Palestinians but also Israel.

In this regard, I attach great importance to our renewed dialogue with both Israeli President, Mr. Herzog, and Prime Minister, Mr. Bennett.

Despite our divergences on Palestine, our relations with Israel in the fields of economy, trade and tourism are in progress.

I believe that a solution that will take into account the sensitivities of all convictions can be procured in Jerusalem.

Relations between Turkey and Israel are vital for the stability and security of our region.

We are ready to improve our cooperation and make better use of our high potential.

For I believe it is in our common interest.

As I end my speech with these thoughts, I would like to thank you again for honoring us with your presence in Ankara."