Gidon Kremer, the classical violinist and a master of contemporary classical music who is considered one of the best violin virtuosos alive, performed on the stage of CRR Concert Hall together with Cem Mansur who had studied music in London and then Los Angeles Philharmonic Association as the student of Leonard Bernstein.
Elda SASUN
SHARE ON TWITTER SHARE ON FACEBOOK
December 17, 2021 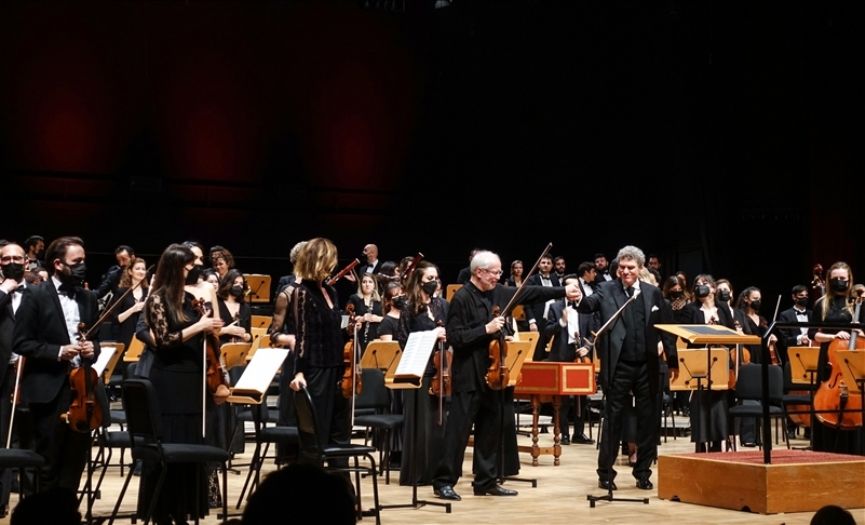 During the concert on Saturday, December 11th, Gidon Kremer who took the stage with his 380-year-old violin signed by Nico Amati in 1641, was accompanied by the CRR (Cemal Reşit Rey) Symphony Orchestra.

Kremer, who is described as the 'World's best violinist' by Herbert Von Karajan, the famous orchestra conductor, one of the leading personalities of the 20th century, had previously given concerts in Istanbul. The artist, who had started studying violin when he was just 4 years old from his father and grandfather who both were violinists, played the 'Violin Concerto No.4' and the piece interpreted as 'A Midsummer Night's Nightmare' [originally named '(K)ein Sommernachtstraum'] written for him by Alfred Schnittke, during the concert.

The Chief Conductor Cem Mansur, giving a short speech to the audience filling the auditorium before the concert, first told about what he had done since the day he had assumed duty and then about Kremer and the piece he would be playing.

Mansur, who had assumed duty as the general art director of CRR (Cemal Reşit Rey) Concert Hall 2 years ago, in this concert, which is one of the last two concerts after his dismissal, gave some information about his accomplishments throughout his tenure saying, "These are my last two concerts with the Cemal Reşit Rey Symphony Orchestra consisting of the best musicians. I hope there will not be any lockdowns from now on. I would like to thank everyone who is here and not. Because you have restored this hall to its old state in a really short time and filled it despite the pandemic conditions. We couldn't have done it without you."