´Synagogues of Turkey´ Exhibition in Edirne 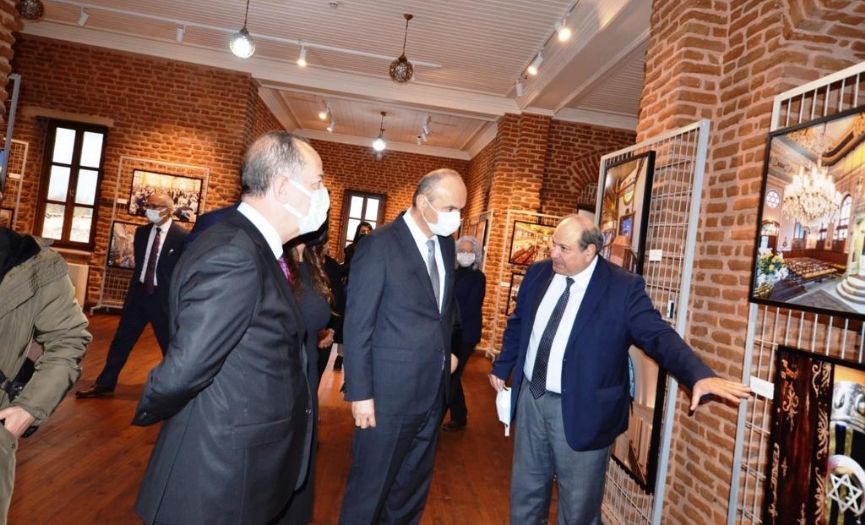 The Quincentenial Foundation that had presented the 'Synagogues of Turkey' book, photographed by Izzet Keribar and written by Naim Avigdor Güleryüz with an exhibition in Balat Ahrida Synagogue in October, has now taken the exhibition to Edirne after Istanbul. On November 25th, the 99th anniversary of Edirne's independence from the enemy invasion, the exhibition was opened in the Grand Synagogue of Edirne Foundation Culture and Art House. Ekrem Canalp the Governor of Edirne and his wife, Recep Gürkan the Mayor of Edirne and his wife, Osman Güneren the Edirne Regional Director of Foundations, besides members of the press and selected guests, attended the inauguration of the exhibition.

As the opening ribbon was being cut, Silvyo Ovadya presented the 'Synagogues of Turkey' book to Governor Canalp, Mayor Gürkan, and Regional Director of Foundations Güneren, on behalf of the Turkish Jewish Community. Following the brief speeches made, Silvyo Ovadya gave the guests information about the photographs that are taking place in the exhibition. A four-person chamber music orchestra consisting of Trakya University State Conservatory students entertained the guests with the many pieces they performed.

The 'Synagogues of Turkey' exhibition may be visited until January 12th, 2022.