"I am a Free and Fearless Jew"

Rabbi Mendy Chitrik has turned the trips he had been taking to inspect the factories having kosher certificates, into road trips where he had been following the lost traces of the Jewish heritage in Anatolia, especially in recent years. We talked about his exceptional 26-day-long travel where he chased Jewish traces on a route from Çanakkale to Nemrut, from Sakarya to Anamur.
Mois GABAY
SHARE ON TWITTER SHARE ON FACEBOOK
October 25, 2021 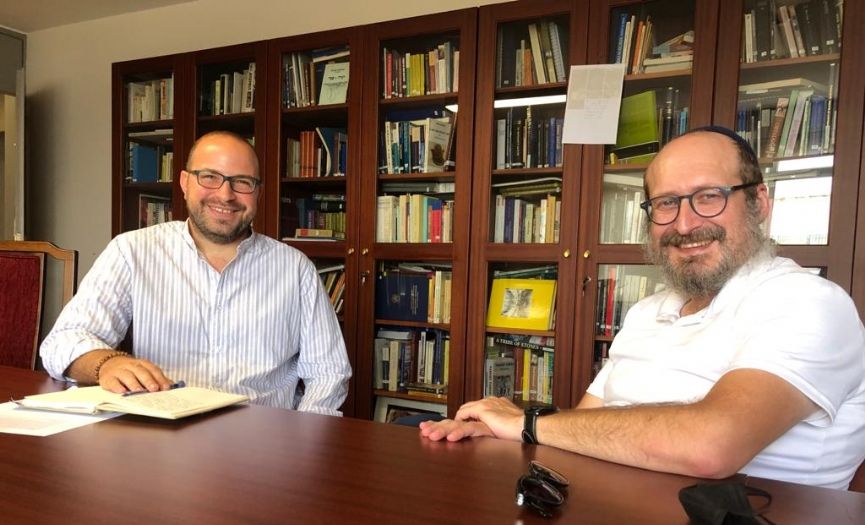 "A person should always adapt to the place he/she is in and the new circumstances!"

Rabbi Mendy Chitrik, with whom I met at the Şalom office right before the Tishrei holidays, to talk about his impressions on his 26-day-long “Anatolian Jewish Traces" trip, started his words with this very sentence. Undoubtedly, if the person you intend to interview is a Rabbi, you have to pay a little more attention to your questions. Your job becomes even harder especially if this person, due to the “Kosher Inspections”, has learned Anatolia during the last two summers, like the palm of his hand, almost as a tour guide gets to know his/her material.

Even though I had a 10-question-long text ready for my interview, just as I had guessed Rabbi Mendy had started telling himself. Before even having a chance to start my interview, he had already said wise words about life that for all of us would be worthy of a lesson. During our almost 3 –hour interview at the Şalom office, Rabbi Mendy, while making rather interesting observations concerning Anatolia and of course the change and development of the Jewish heritage of more than 2700 years, also led me to ponder a lot with his sincere comments.

I will try to share some of the highlights of this pleasant conversation.

"Being a Rabbi requires learning something from everyone!"

At the beginning of our conversation with Rabbi Mendy, his first sentence had been "A person should always adapt to the place and the new circumstances he/she is in." The 110 Zoom conversations he had done with distinguished guests during the pandemic were indeed an indicator of this adaptation to new circumstances. He had summed up that learning had no age or status with these words: "As a Rabbi, I talk to people at cafes. My favorite cafe is Starbucks; there they know that I drink my coffee with soy milk. Who is a Rabbi? Someone who can learn something from everyone. Being a Rabbi requires learning..."

"When I first came here 20 years ago, I never thought that one day I would share these experiences!"

Rabbi Mendy, following the Jewish traces along a very comprehensive route once again this year, completed this 26-day-long great adventure by passing through the towns of Bursa, Balikesir, Izmir, Tire, Manisa, Turgutlu, Akhisar, Ephesus, Söke, Milas, Bergama, Canakkale, Gelibolu (Gallipoli), Keşan, Ankara, Cappadocia, Kayseri, Adıyaman, Nemrut Mountain, Çermik, Malatya, Diyarbakir, Nusaybin (Nisibis), Mardin, Urfa, Harran (Carrhae), Antep (Aintab), Kilis, Antakya (Antioch), Iskenderun (Alexandretta), Adana, Mersin, Anamur, Antalya, Isparta, Burdur, Afyon, Eskişehir, Sakarya, Konya, Eregli, Karaman, and Ermenek. Needless to say, the unfortunate forest fires that coincided with the timing of this long trip, and consequently an impudent man's unmannerly anti-Semitic posts intending to link Rabbi Mendy to the forest fires, upset and worried us at the same time. As soon as I had the chance, my first question to Rabbi Mendy had been on "How safe have you felt yourself in Anatolia?". Let's listen to the rest from him: 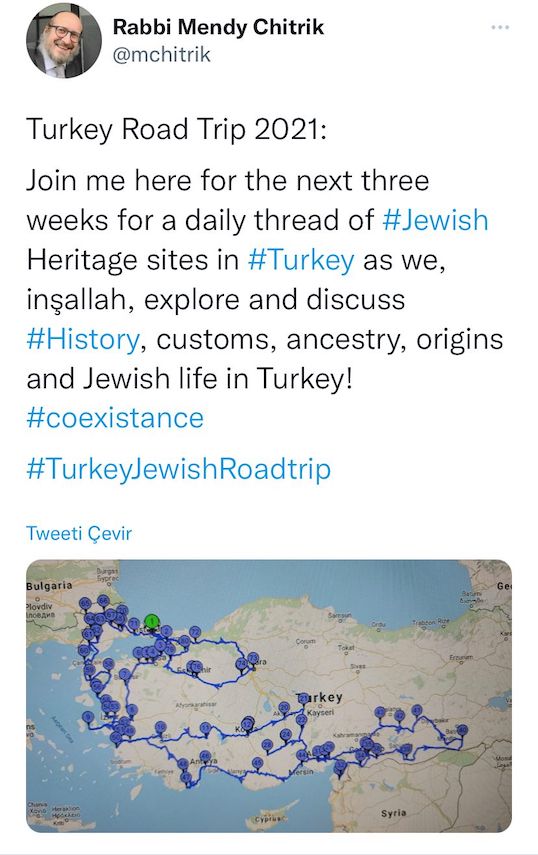 "Last year we had promoted our trip via Facebook. My grandfather had been the Chief Rabbi of Belgium. When I had started to tell and cite his life via Twitter while I was in Belgium, it received great attention, there was a very nice synergy. So, this year we thought it best to publicize and share the Anatolian Jewish Heritage via Twitter. The lives in Twitter and real life are in fact completely different. This was an experience I was also able to observe in the field. Politics and diplomacy are different; the lives we live are different. First of all, concerning the anti-Semitic case we experienced, the authorities intervened immediately. The authorities immediately summoned the person who had uttered those words. I would like to thank the co-presidents of our Turkish Jewish Community, Erol Kohen and Ishak Ibrahimzadeh for their support.

I conducted searches via Google on words 'havra [meaning synagogue]' and 'Yahudi [meaning Jew], ahead of arriving every city I visited. I spoke to people at the local coffee shops. Nobody in Anatolia found it odd my walking around wearing a kippah. They even accepted that I bake my own bread in a bakery because of Kashrut. We took delightful photos.

We shouldn't label the entire story as “anti-Semitic” because of some painful events. If I were in America or France, I wouldn't be able to comfortably walk around with a kippah. In Kilis I talked to the Governor personally and then we visited the synagogue together. On our way out, the neighbors invited us for a coffee." 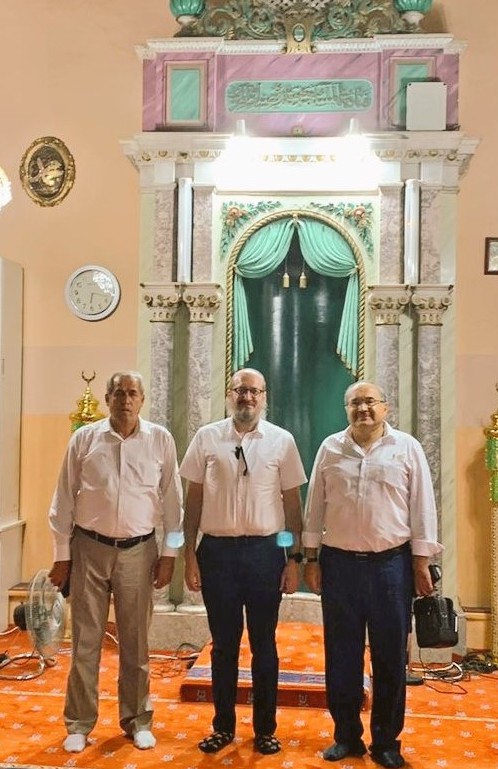 Two Imams and one Rabbi in Manisa

"Judaism is the oldest surviving religion in Anatolia!"

What I eagerly asked Rabbi Mendy following this precious narrative was what he had discovered anew this time. He shared with me a lot of knowledge that I learned for the first time, from gravestones to Jewish traditions, the empty spaces left behind from the mezuzahs in the old Jewish houses, and names. I'm quoting some details of this interesting information through Rabbi Mendy's own words:

"The inscriptions on the gravestones also show us how life changes in time. While there were very simple gravestones 600 years ago, very fancy stones were preferred for the graves between the 17th and 19th centuries. What's more interesting is in time Hebrew has been replaced with Ladino (Judeo Spanish) on the gravestones... Later we see gravestones in French and German, then we can also see a period when gravestones in Turkish have been popular.

The Milas Synagogue is being used as a public education center today. While we were exploring the old Jewish houses of Milas, we helped a Jewish family that had migrated from Milas to Texas, discover their family ties, via Twitter. The family who has read the article about my trip in the Chabad.org website, thus managed to find their great-grandfather's house.

During our visit to the Miletus Ancient Theater, we discovered there an inscription in Latin, stating, 'There are special seats for Jews'. We saw that there still is a place called 'Jewish Plain' in Ünye, Ordu.

In cities such as Izmir, Akhisar, Turgutlu, Kilis, and many more, we have come across common memories and sayings of families about Jews like "My mother used to go to houses of Jews on Shabbat days to help light fire". So, this reminded us that the Jewish traces that were able to survive for us, until today were usually the synagogues, cemeteries, and the Jewish lifestyle.

In Kilis, we were very excited to see that the 'Mikveh' part of a Hammam that Jews used to go to, was still standing.

When exploring the Anatolian Jewish heritage, we should be looking through a more complex perspective and not forget that Judaism is the oldest religion that is still practiced today. We are aware that as a Cappadocian tradition the Shabbat candles traditionally lit with olive oil after the destruction of Beit HaMikdash - Solomon's Temple, can be lit with any kind of oil including petroleum, because olive oil could not be found everywhere, yet petroleum could be found in the region.

"If we don't take care the Jewish heritage will be lost! It's our duty to promote this heritage!"

At the end of this pleasant conversation with Rabbi Mendy, when I asked him what he can advise parents who want to familiarize their children with the Jewish heritage on these lands, his answer was clear and precise: "Wherever you go, definitely show the Jewish heritage to your children! As the first stop to discover Jewish traces in Anatolia, they can start with Western Anatolia - Aegean Region. Milas, Muğla, Fethiye, and Bodrum are the old Jewish settlements they can also visit.

It would be incomplete to study the history of Turkish Jews through only the Sephardic community. There are at least seven different Jewish traditions in Turkey including Ashkenazi, Sephardic, Romaniote, Karaite, Mizrahi, Mashhadi, and Kurdish. 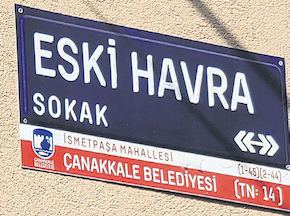 In Turkey, four different streets in four different cities have been named 'Havra [meaning synagogue] Street'. These are in Canakkale, Gelibolu (Gallipoli), Izmir, and Antalya... These are the effects of the reflections of Jewish cultural heritage...

If we don't take care, the Jewish heritage will be lost! It's our duty to promote this heritage!"