The Izmir Jewish Heritage Project was launched in the Turkish city of Izmir to preserve the city´s unique complex of centuries-old Sephardic synagogues. This major preservation project promises to establish a museum that will highlight and promote the city´s rich Jewish cultural heritage.
SHARE ON TWITTER SHARE ON FACEBOOK
October 20, 2021 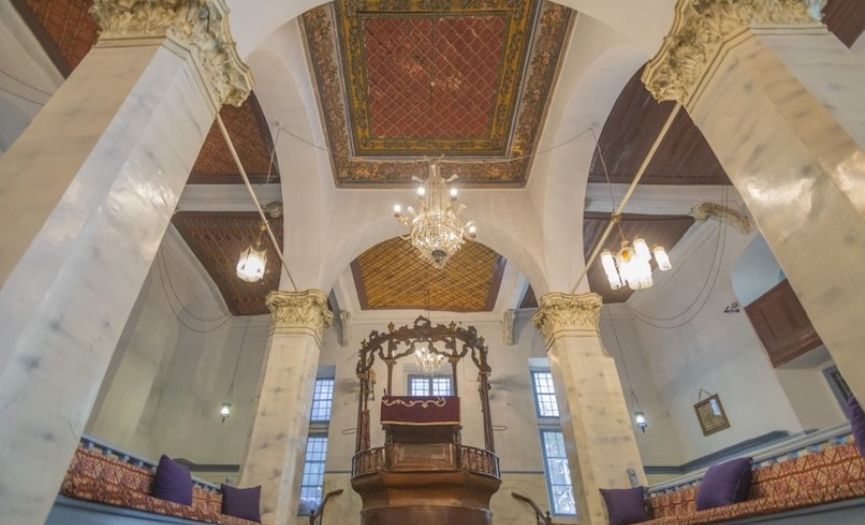 Interior of the Shalom Synagogue (Photo by Nesim Bencoya)

The port-city of Izmir, historically referred to as Smyrna, is located on Turkey’s Aegean coast and is well known for its rich Jewish history and heritage. Jews have lived in this part of Anatolia for centuries, as attested to by the ruins of the largest known synagogue of antiquity, located in the nearby ancient Lydian city of Sardis. In Izmir proper, the relatively recent discovery of a 5th century terra-cotta oil lamp, adorned by a Star of David, further highlights the long-standing Jewish presence in the region. In more recent history, however, it has been the city’s Sephardic community that has left its indelible mark on Izmir’s urban landscape and culture.

Sephardic Jews began to settle in Izmir, and other Ottoman cities such as Istanbul and Salonica, following expulsions from the Iberian Peninsula at the end of the 15th century. In Izmir, the Sephardic community went on to play a significant role in the development of the city as a major centre for commerce and trade in the 16th and 17th centuries. It was also in this period that the Ladino-speaking community began to construct numerous synagogues in the city’s old Jewish neighbourhood - or djuderia - known by its Turkish name of Kemeraltı. 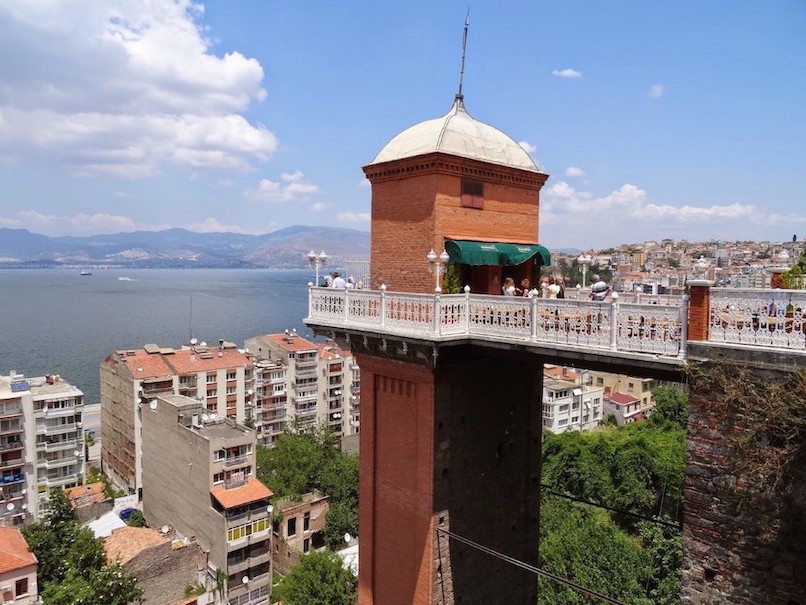 A view over modern-day Izmir

Despite migratory trends that saw many Jews move to newer quarters of the city in the late-Ottoman era, the neighbourhood of Kemeraltı maintained its position as the centre of Jewish life in Izmir for several centuries. It was within the confines of Kemeraltı for instance, that the notorious self-proclaimed messiah Shabtai Tzvi grew up in the 17th century. It was also in and around Kemeraltı that Izmirli Jews would traditionally gather to celebrate holidays such as Purim with large and vivacious street parties, much to the discontent of the community’s lay leaders and rabbis. Active Jewish life continued in Kemeraltı until 1948, when in the aftermath of the establishment of the state of Israel, many of the city’s Jews decided to emigrate. As a result, several of the ancient synagogues in the neighbourhood became neglected and gradually fell into a state of disuse.

Several years ago, the local Jewish community initiated a conclusive project in collaboration with the Kiriaty Foundation to rehabilitate and restore the synagogues of Kemeraltı, understanding the importance and cultural significance of Izmir’s unique Jewish legacy. Inspired by the model of several European cities, such as Prague, that were able to successfully preserve their rich, historic, Jewish heritage by means of encompassing preservation strategies, the Jewish community of Izmir decided to launch the Izmir Jewish Heritage Project. This project has the overarching goal of transforming nine of the Sephardic synagogues of Kemeraltı into a Jewish museum, with the aim of becoming a major centre for intercultural dialogue and a site for showcasing the long history of Muslim-Jewish coexistence in the city. Interior of the Shalom Synagogue (Photo by Kenan Cruz Çilli)

The synagogues of Kemeraltı, four of which are built back-to-back, constitute an unparalleled historical and cultural treasure in the heart of Izmir’s bustling Ottoman-era bazaar. These synagogues are but a stone’s throw away from the 17th century Kestanepazarı and Şadırvanaltı Mosques, serving as a historic window into the diverse urban fabric of Ottoman cities. The setting of the future museum within the synagogue complex will ensure that elements of Izmir’s distinct Jewish culture, such as culinary and musical traditions, will be safeguarded alongside material elements such as the countless manuscripts, books, and parochets within the community’s possession. As such, the museum will not only guarantee the conservation of these artefacts, but will also provide an exceptional venue for locals and tourists alike to learn about Izmir Jewish culture and traditions.

The future museum is set to be one of the most well-preserved Sephardic cultural complexes in the world, with permanent and temporary exhibitions presenting the tangible and intangible elements of Izmir Jewish culture to its visitors. The famous Polish-American architect, Daniel Libeskind, who is known for designing Jewish museums and memorials around the world, has already expressed his preliminary interest in the Izmir Project, and restoration works on some of the synagogues in the neighbourhood have already been completed in recent years. These restorations took place in a major collaborative effort, bringing together multiple stakeholders, local and international, public and private, with the shared objective of safeguarding and revitalising Izmir’s invaluable Jewish cultural heritage. An overview of the Back-To-Back Synagogues of Kemeraltı (Image: Izmir Jewish Heritage Project)

The Izmir Jewish Heritage Project, financed by the European Commission, is the latest push in a series of conservation efforts that precede the establishment of the future Jewish museum. This leg of the project, launched in June 2021, will provide the necessary funding for the restoration of Kemeraltı’s two remaining dilapidated synagogues - the Hevra and the Foresteros. Following the conclusion of this stage, the project will finally have the means to enter its final stage - the foundation and establishment of the Jewish museum.

“This is a very exciting and unique project in a Muslim majority society,” remarks Nesim Bencoya, the coordinator of the Izmir Jewish Heritage Project and a native of the city. “Exposing and reviving Jewish life in the historical Jewish District of the city provides a source of pride for the Jewish community members as well as a strong presence in the society. It provides a new touristic destination for the city as well as a strong resource in fighting antisemitism” he concludes.

Overall, the Izmir Project is undoubtedly an inspiring and impressive undertaking for a Jewish community that today numbers less than 1000 members. It is a good example of how numerous stakeholders, including the local community, the European Union, civil society organisations, municipalities, and development agencies can coalesce to preserve vulnerable minority heritage in Turkey, highlighting its significance in the history of the country and recognising its unique and distinct position in the urban fabric of Turkish cities. 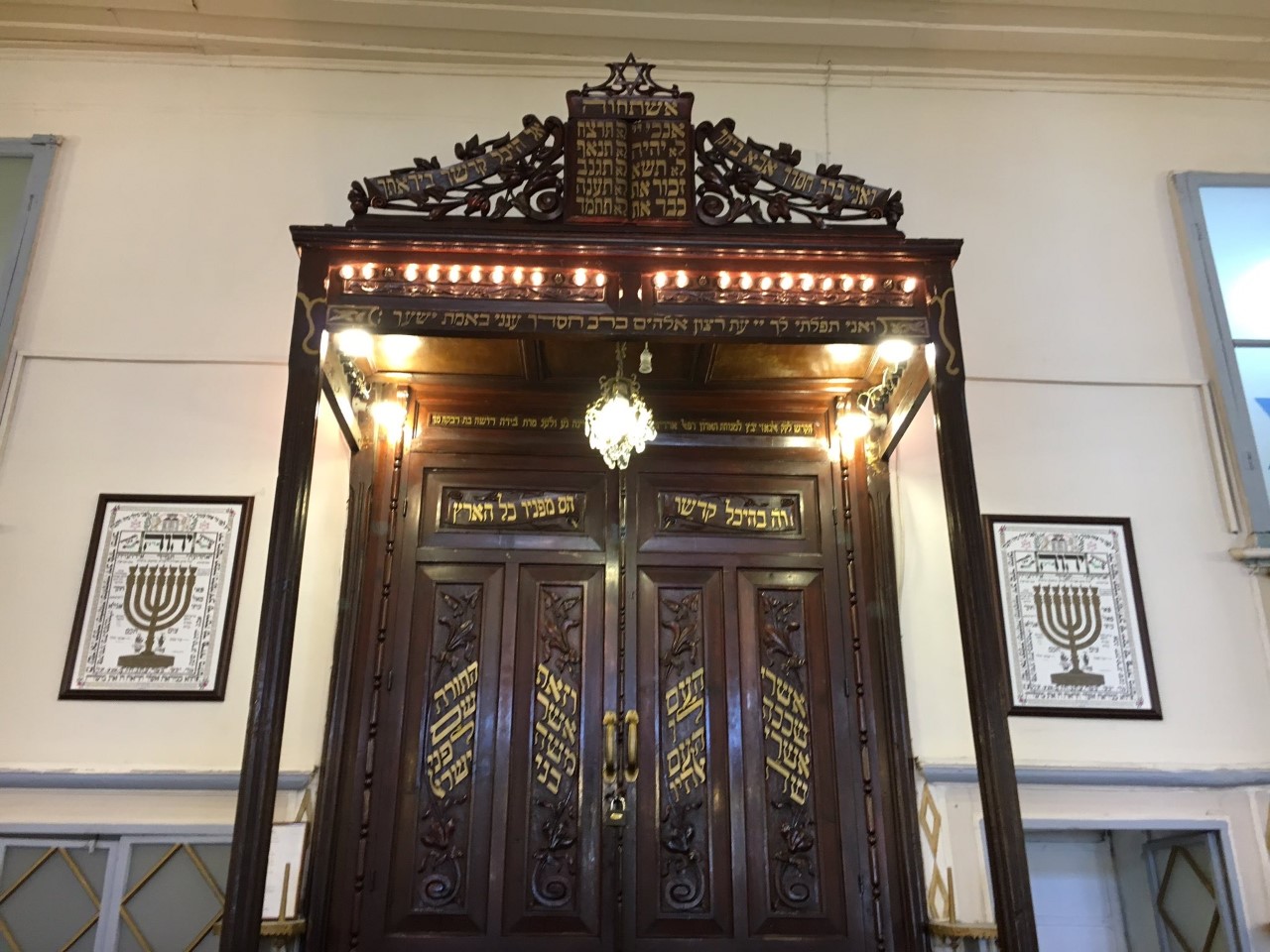 Kenan Cruz Çilli is a graduate student of Modern Middle Eastern Studies at the University of Oxford and a regular contributor to El Amaneser and Şalom. His interests include cultural heritage and minority identity in Turkey. Twitter: @kenancruz