A Book and an Album Added to Renan Koen´s Achievements

Pianist, composer, educator, and music therapist Renan Koen´s book, ´Positive Resistance´ in both Turkish and English is published by Gözlem Publishing and her music album ´March of the Music´ is released from Lila Music.
SHARE ON TWITTER SHARE ON FACEBOOK
July 16, 2021 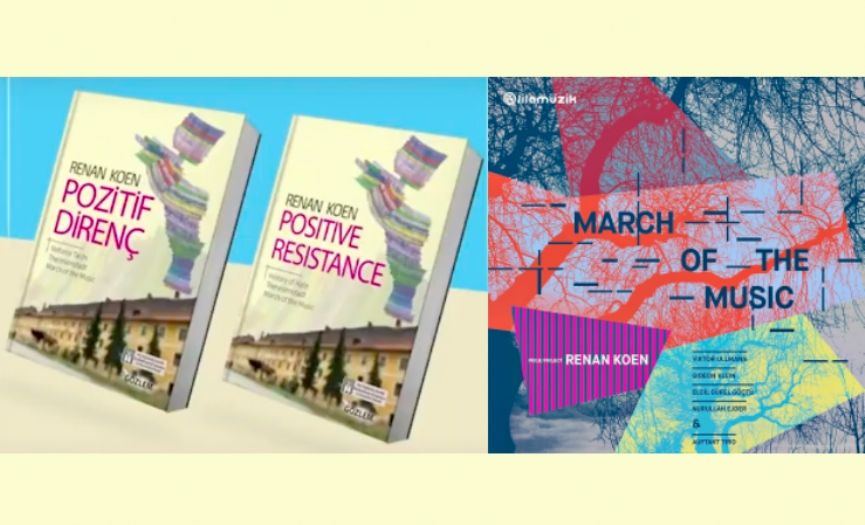 Renan Koen through her book is introducing to the readers, both the historical documents about what Turkish Jews imprisoned in Theresienstadt had gone through during Holocaust even though 'Muslim' had been written on their documents, and 20 music critiques the composer and music critic Victor Ullmann had written in Theresienstadt.

In the book 'Positive Resistance', the stories of the 'survivors' who had managed to live enough to tell how they survived despite the atrocities they experienced, and their lives in the Theresienstadt Concentration Camp where mostly the artists were imprisoned, are told in detail.

The book appeals to a wide audience due to its also including Koen's ‘Positive Resistance through Holocaust Reality’ education she's continuing with young people to be able to say 'Never Again' regardless of religion, language, or race, and the 'March of the Music' student movement formed by young people in line with their own abilities.

The 'March of the Music' album is released

Simultaneously with Renan Koen's new book based on the idea "The most important condition of peace is to meet the generative and creative soul inside us and keep it alive.", her new project 'March of the Music' is also released from Lila Music on the digital platforms.

The music album, besides the works of Viktor Ullmann and Gideon Klein who had lived in the Theresienstadt Camp, also features the new compositions of the 'March of the Music' students Elcil Gürel Göçtü and Nurullah Ejder who has been to the camp and witnessed what had happened there.

While listening to the works in the album along with the emotional interpretations of Auftakt Trio, Ekin Güldoğan, Eyüpcan Açıkpazu, Gizem Yılgın, Selim Boyacı and Renan Koen, it is also possible to read the Theresienstadt impressions of Öykü Üçgüler and Engin Çetin in the CD booklet.

The album released with the contributions of the Turkish Jewish Community and Izi Morhayim has been dedicated to the memory of Doris Grozdanovičová, the 94-year-old Holocaust survivor who had survived the Theresienstadt concentration camp but died recently. The album whose cover has been designed by Gözde Oral can be listened to on iTunes and Spotify.

The book launch and musical interview will be on YouTube

The launch of Renan Koen's book 'Positive Resistance' will be on Sunday, July 25th, at 21:00. The event organized jointly by The Ministry of Foreign Affairs, The Turkish University Students and Academics Association (Türkischer Studenten und Akademikerverein Türk ÜnID e.V.), Consulate General of Turkey in Cologne, Cyprus Science University, Chief Rabbinate of Turkey, and The Quincentenial Foundation Museum of Turkish Jews, will be moderated by Levent Taşkıran, the President of The Turkish University Students and Academics Association (TürkÜnİD).