The old Bet El Synagogue in Jaffa which had served the Turkish Jews in Israel is renewed and opened for service once again on June 19th.
Sara YANAROCAK
SHARE ON TWITTER SHARE ON FACEBOOK
June 29, 2021 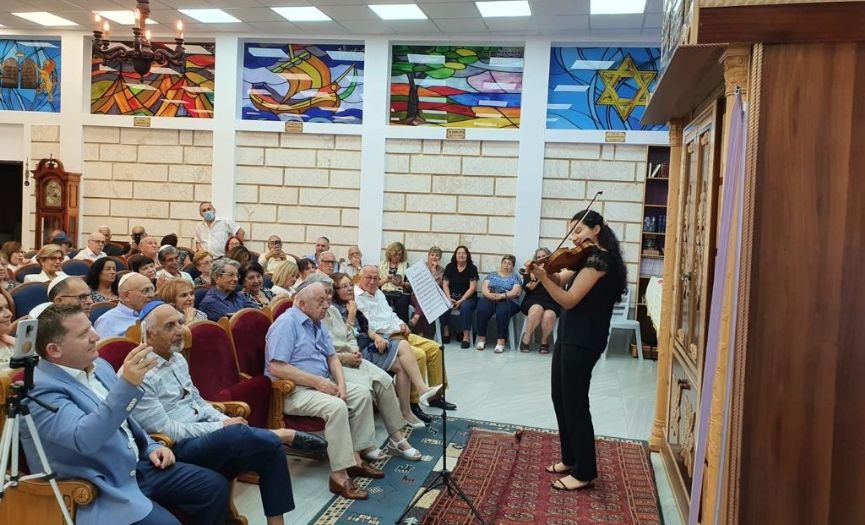 After the special opening ceremony organized by the 'Union of the Jews of Turkey in Israel (IYT - Itahdut Yotsei Turkia)', Bet El Synagogue is once again in service for the worshipers. The opening ceremony hosted a distinguished group of guests including the Sagol Family who made the renewal of the synagogue possible, Moreno Margonato, IYT Chairman of the Advisory (Moatsa) Board Yakup Barokas, Members of the Advisory (Moatsa) Board and spouses, and IYT Members of the Board of Directors.

Following the speeches of IYT Chairman of the Board Ovi Roditi Gülerşen and Moreno Margonato after the Shehecheyanu Prayer recited along with the Hazzan and the lighting of the Havdalah Candle, the young violinist Dilan Karayılan gave a small concert with her violin. The young artist, who interpreted works from Shostakovich to Turkish compositions and a few Israeli works with folkloric motifs, received a big applause from the audience at the end of her concert. Karayılan, who is a student of Prof. Cihat Aşkın, is currently studying the first grade at Tel Aviv University Music Academy.

Itzhak Sagol, after her violin concert, presented Dilan Karayılan with a certificate of appreciation. Also, Chairman Ovi Gülerşen presented Yeşua Avaz, the synagogue's Chairman of the Board a silver 'Yad [Hand]' after his speech of appreciation in Hebrew.

After this ceremonial event, guests had a pleasant time savoring the delicacies presented by the Sagol Family. This synagogue will from now on continue to serve the Jews of Turkish origin, for both worshiping and celebrating their happy events.

Bet El Synagogue started to serve the Jews from Turkey living in Jaffa and its vicinity in 1963. However, when the Turkish immigrants had started to move to other districts mainly Bat Yam, the number of synagogue-goers decreased, decay and corruption started due to neglect. At this stage Sagol Family, one of Israel's most important philanthropic families stepped in and provided the necessary funds to renew the old building with a large donation. The interior furnishings and ornaments of the renewed building were made by donations from the worshipers of the synagogue, and donations made from inside and outside of Israel.

To watch the video of the opening ceremony and the violin concert please visit the YouTube link below: