UÖML (Ulus Jewish High School) students organizing Holocaust Remembrance Ceremonies every year not to forget and not to let it be forgotten, realized a new project this year.
SHARE ON TWITTER SHARE ON FACEBOOK
April 16, 2021 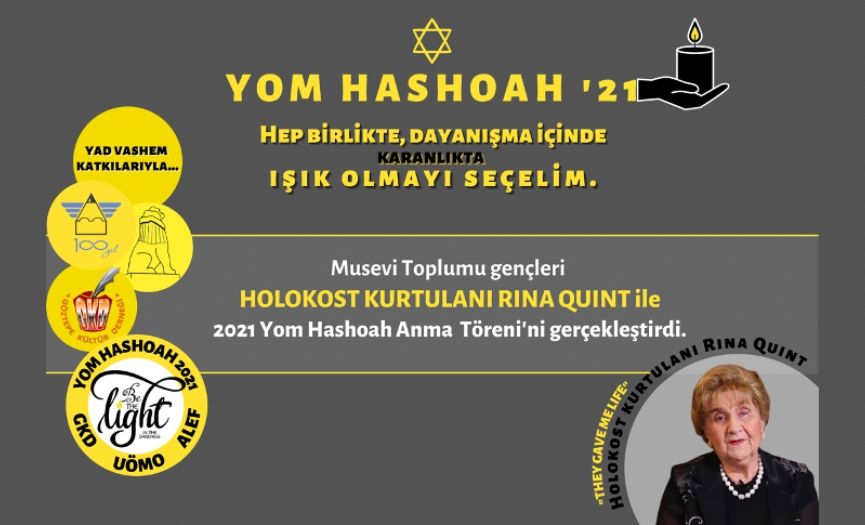 The youth of our community who came together led by UÖML prepared an emotional and unforgettable memorial ceremony also joined by the Holocaust survivor Rina Quint. One of the last witnesses of the Holocaust, Quint, during the memorial via Zoom, lit a candle in memory of the 6 million together with the young people, 'To be the Light in the Darkness', and shared her life story.

This year various memorial ceremonies have been held around the world, themed 2021 Yom HaShoah 'Be the Light in the Darkness. Within this theme, UÖMO (Ulus Jewish Schools) administrators sent 'memorial candle kits' to be lit during the event, to almost 800 young people's homes. During the memorial event organized via Zoom on April 6th, the young people accompanied Rina Quint who lit a candle in memory of the 6 million, with the candles they had prepared.

The Memorial Ceremony started with a presentation of the Holocaust artworks at the Yad Vashem Holocaust Art Gallery. The musician, pianist, founder of the March of the Music Movement Renan Koen attended the event with a mini piano concert. During this special ceremony, hearing what Rina Quint had lived through firsthand was really moving. Rina Quint who thanked the young people for the crowded memorial ceremony said, "... During Holocaust one and a half million children were murdered just because they had been Jewish. I lost all my family when I was 2 years old. In the camps, I survived thanks to my angels that I didn't even know, who had protected me. For many years my childhood memories had been blurry. Thanks to my personal researches and Yad Vashem's contributions, today I know who I am. What happened was very painful. Tonight I've told you everything I remembered I lived through, and as long as I'm alive I will continue to do so. I've felt your sensitivity for Holocaust through the program you prepared and the questions you asked. I believe no such pain will be lived again thanks to concerned young people like you who embrace their past and their future."

UÖMO administrators also stated that, in these days where the Holocaust survivors are passing away one by one, the fact that our youth could listen to this story firsthand was a very important and unforgettable education.