For the 100th birth anniversary of the Jewish singer and actor Dario Moreno who had lived his childhood and youth in Izmir and was known for his deep love for the city, a mural named ´Izmir loves Dario´ was painted on the street that had been named after him.
SHARE ON TWITTER SHARE ON FACEBOOK
April 7, 2021 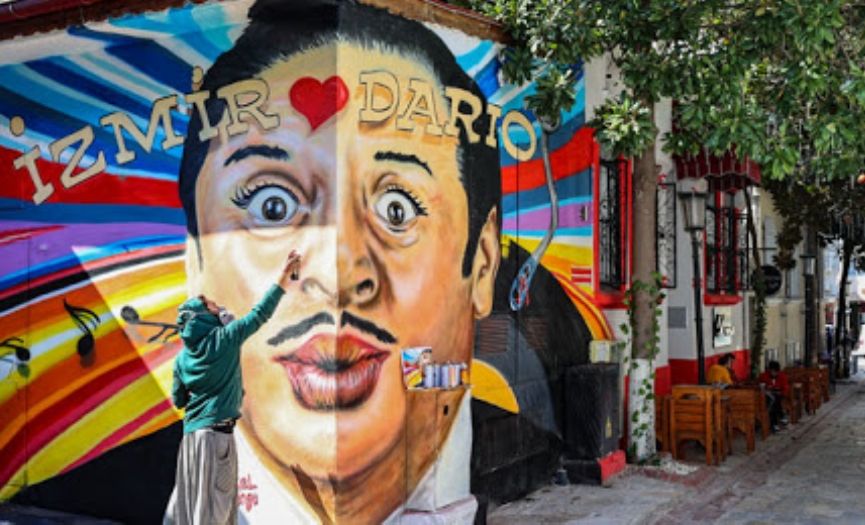 The mural, painted by Aksel Mengü (36), a graduate of Marmara University Faculty of Fine Arts, Graphic Arts and Design Department, on the wall of the Dario Moreno street in the Konak district of Izmir, was completed on Moreno's birthday. The historical elevator of Izmir is also located on Dario Moreno street.

Mengü, who also acts as an art director in various series and movies, in his statement he made to AA news agency reporter said, making Dario Moreno's portrait for his 100th birth anniversary had been requested from him.

Mengü, remarking that in the process he had the chance to get to know Dario Moreno, whom he only had known by name and his songs, said, "At first I accepted the job thinking that it's easy. However, there's a deep backstage to every task. It has to be evaluated from every aspect. The hard part was it's being three-dimensional. Also, a fascinating side of this is that the portrait is facing the house he used to live in.

Telling that he has watched eight documentaries of Moreno before starting the mural, Mengü said:

"His agent is alive, I contacted him. I reviewed his life, his biography, all his photos, and listened to all his songs, as much as possible. He's a very colorful character, he had acted. At the same time, he had played the guitar and the piano. He had had a tough life. He's very active; considering how he looks, maybe you cannot imagine him dancing like this, but he's a very charming and colorful personality. It was hard to be able to reflect all these features in only one portrait. While doing it I also won the hearts of the people living in the neighborhood. Because there are people using this street every day."

Mengü also stated that he was happy he presented the people of Izmir with a 'Dario Moreno".

Dario Moreno's 100th birth anniversary was celebrated with an online concert broadcasted on Izmir's YouTube channel IzmirTube, on the evening of April 3rd. During the concert, the famous singer Fatih Erkoç sang Dario Moreno's songs, along with Kürşat Başar's narration and the Zafer Çebi Orchestra.