The gate of the historical Kasturya Synagogue, located in the Ayvansaray district in Istanbul, has been set on fire by unidentified people. The eyewitness Serhat Ersürel told what happened.
SHARE ON TWITTER SHARE ON FACEBOOK
March 22, 2021 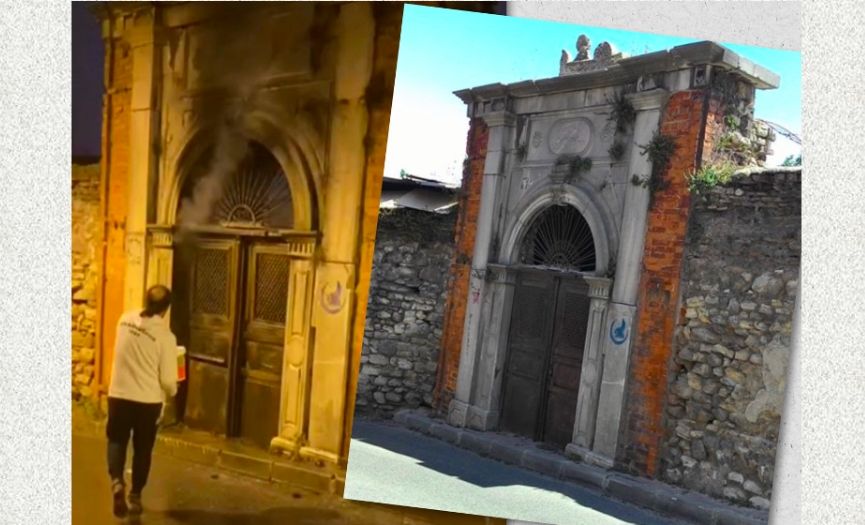 The eyewitness Serhat Ersürel said, "While I was passing by, I noticed smokes coming from the Kasturya Synagogue's gate. I took the fire extinguisher from my car and I took the first countermeasure. Then I notified the fire department. They put out the fire. However, the synagogue's gate was damaged."

The Kasturya Synagogue has been handed over to the Directorate General of Foundations in recent years. The restoration works have started in Kasturya Synagogue in September 2020. The excavations revealed some of the basic remains of the ancient synagogue building, as well as fragments from the walls that had been underground for many years.

After the work done, the empty space in the wall surrounding the land had been covered with a wooden panel, and the attendant there had left a while ago.

Later no work was done. The wooden panels installed and locked to protect the remains have been broken a few days ago and unidentified people started to enter.

The investigations will reveal who has set the gate of the historical Kasturya Synagogue on fire, whether it has been done intentionally.

It has been claimed that the fire which had quickly been put out, had been set by the homeless children around.

The Kasturya Synagogue had been founded by several Sephardic Jewish families coming from the city of Kastoria in the Macedonian region of Greece. Only the gate of the courtyard has survived to this day.