From the Museum of Turkish Jews: ´School Diploma´ 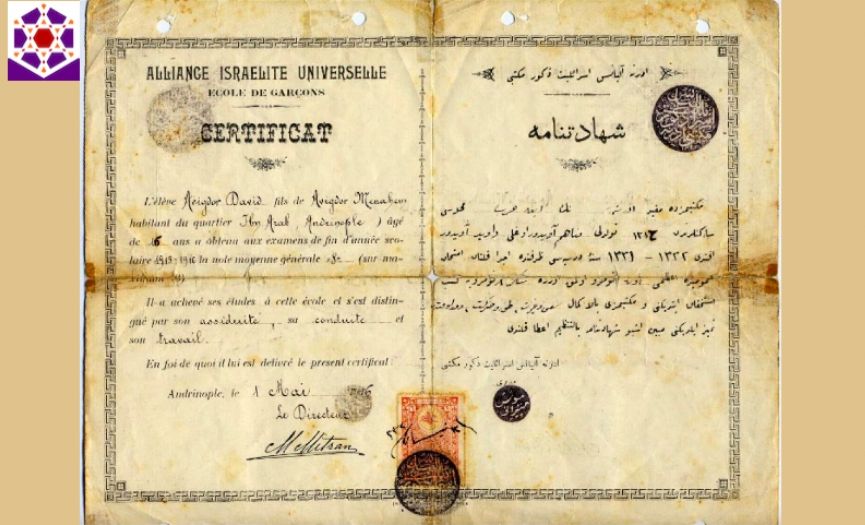 The school diploma seen in the picture is from the year 1916 and belongs to David Avigdor. The diploma that had been given to the museum by Naim Güleryüz, can be seen at the main floor exhibition of the Quincentenial Foundation Museum of Turkish Jews.

This school diploma had been issued by the Alliance Israélite Universelle (AIU) school in the Ottoman Empire in 1916. The schools of AIU in the Ottoman Empire had first started to be seen in Baghdad and Damascus. These schools later were established in many residential areas such as Volos, Edirne, Thessaloniki, Izmir, and various districts of Istanbul.

Alliance Israélite Universelle Schools had been established acting on the fact that the only way for the Jews to be rid of poverty, was a modern education based on language, science, and technical skills. To reach that aim, besides a few managers of AIU that think every community should be educated in the country's own language, most of them thought that the most suitable language for education was French.

With the foundation of the Turkish Republic and establishment of a national education system, when in 1924 the Ministry of Education wanted the Jewish schools to decide whether to continue their education in Turkish or their own languages, the managers chose Turkish education, thus breaking all relations of these schools with the central management in France.