On Friday, November 6th we sadly commemorated once more, Avram Varol, Israel Yoel Kohen Ülçer, Yona Romano, Berta Özdoğan, Annette Rubinstein Talu, and her grandmother Anna Rubinstein, the victims who had lost their lives during the simultaneous terror attacks to Neve Shalom and Şişli Beth Israel synagogues in 2003 as well as Dentist Yasef Yahya who had been murdered in his clinic in Şişli solely because of his Jewish identity.
Elda SASUN
SHARE ON TWITTER SHARE ON FACEBOOK
November 16, 2020 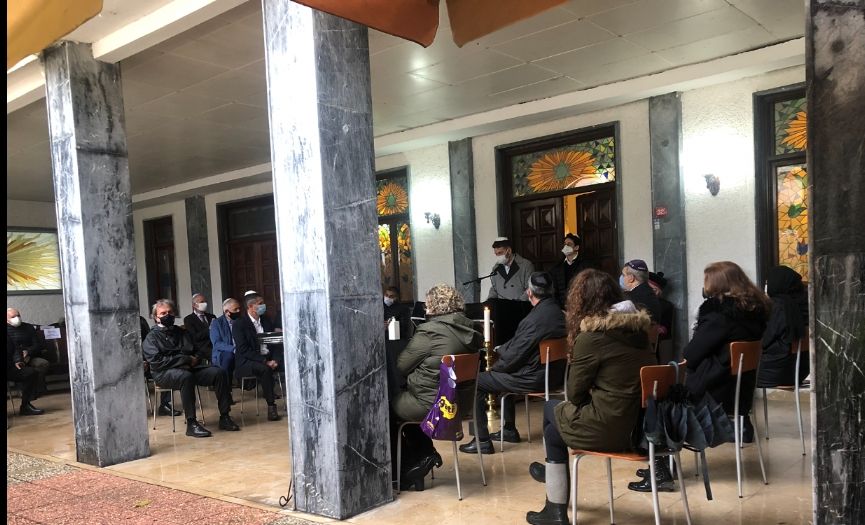 Year 2003, in the morning hours of November 15th, there had been two suicide attacks, one after the other, in Istanbul. The first explosion had happened in front of Kuledibi Neve Şalom Synagogue. Two minutes afterward, at 09:16 A.M. another attack took place in front of Şişli Beth Israel Synagogue. Among the people who had been affected by the horrific explosion were the people praying their holy Shabbat prayers, as well as the people who just happened to be on the street at that moment, and the people working on that street. 27 people lost their lives in this brutal attack.

This year due to COVID-19, the commemoration ceremony organized in the Ulus Ashkenazi Cemetery for the first time, took place outdoors, maintaining mask and social distancing rules at all times. For those who were not able to attend, the ceremony was also live-streamed. Young people who spoke during the commemoration declared that this tragedy will always be remembered and they would never let it be forgotten.

The first speaker was Eran Levent. In his speech, he expressed his feelings saying, "Today we have gathered here to commemorate the 17th year of the brutal attack against our community on November 15, 2003. I was a one-year-old baby at the time thus it is not possible for me to remember those days. But, with what my elders told me throughout the years, I can feel as if I had been there that day. Knowing that hundreds of innocent people that were there just to pray had been attacked, hurts me like I was one of them. Even imagining those moments create a unique sense of fear and panic. First the sound of a huge explosion, then pieces of glass scattered everywhere, people screaming, crying. Even thinking this is dreadful. During the time passed, we have maybe countlessly tried to put ourselves in their shoes and live the moment with them. I’m sure our brothers and sisters who had experienced November 15th have pondered on how to explain the incident to younger people in a more persistent and effective way. They were all so emotionally affected tremendously that what they explained was going to affect the next generations as well. But our community's youth was determined not to let this tragedy, where they had also lost their friend Yoel, be forgotten. They told, we told, incessantly, tirelessly about November 15, transforming Yoel into a memory everyone in our community would wonder about and explore. We constantly explained the importance of this incident, the ideals the thoughts of people we lost. Unfortunately, we cannot bring back the time lost and what it took from us, yet the ambitions and thoughts are always worth keeping alive. No matter how easy it is to feel emotions and how complex it is to transfer them, we will always do our best to ensure not to forget and not let this be forgotten. We are here and we are designing our path along their light. We commemorate Annette who was only 8 years old at the time, her grandmother Anna, Berta Özdoğan who was about to become a mother, Avram Varol, and Yona Romano with love and respect. However, we could have been talking about a much worse scenario. The list of dreams and aspirations lost could have been much longer. If our Yoel hadn't voluntarily risked his life to save our community and worshippers, maybe he would still have been alive. That day he did not act by prioritizing November 15, but rather by thinking of his responsibility to pass on history to the next generations. He wanted his community to continue living freely, worship, and get together in the synagogues for different occasions. Just like we have been for the past 17 years we are once again together to ensure what happened that day does not happen again. Being here together despite the horrible consequences of the pandemic makes me hopeful. We still carry the pain and sorrow of the lives lost in our hearts and every year we come together stronger to keep November 15 alive. We will keep on keeping it alive. We have not been destroyed; we will not be destroyed. We are here."

Rafi Levi who took the stand later said, "I have been to numerous November 15 commemorations and listened to many speeches. Speakers all started their speech by describing how they have felt on the morning of November 15, 2003. However, at the time I was only a two-year-old child, trying to figure out the world I live in unaware of what was going on around me. Thus, I do not have any memories. But this does not mean I cannot remember the tragic incident. Firstly, although I do not have any memories about that day my family, unfortunately, has bitter memoirs. After the disturbing news they had heard, my parents searched hospitals for hours to find their dear friend's pregnant sister Berta, only to find her in the forensic morgue. This is only one of the sorrowful stories told about that day. One of the factors that enable me not to forget what had happened that day, is because the grief of that day still fresh. Also, the effort to keep the pain that has become part of our community alive... Therefore, young members like me, although we have not personally experienced the pain, feel it, and do our best to remember and remind the horrific attack. Believe me, the statement ‘We are here’ written on the bracelets we wear and that has become the slogan of the November 15 commemorations, is not hollow. We really are here to remember and remind the pain. We are here so that the generations after us can also feel and remind the pain to those coming after them. We are here to ensure the memories of every individual who passed away that morning shall stay alive. We are here so that horrible incidents like these shall never happen again. I personally promise that I will go on being here to ensure the pain and sorrow shall not be forgotten."

Rabbi Isak Alaluf said, "God bless their souls," commemorating all the innocent citizens who had lost their lives including the security guards and the police officer Bülent Bostanoğlu.

Chief Rabbi İsak Haleva lit the commemoration candles, followed by the mournful families. Rav Yeuda Adoni and Chief Rabbi Haleva read verses from Teilim ve Zohar. The ceremony ended with Kadish prayer recited all together. While leaving the cemetery my soul murmured the words, "El Malei Rachamim, Merciful God, wrap those you take by your side with love and comfort."