The Question Einstein and Freud Searched the Answer for Through Letters: WHY WAR?

In the geography in which they are birthed, war and peace sweep through the lands like winds. The first carries an eternal winter of darkness and cold, and the second, the pleasant joy of spring.
Bahar AKPINAR
SHARE ON TWITTER SHARE ON FACEBOOK
September 29, 2020 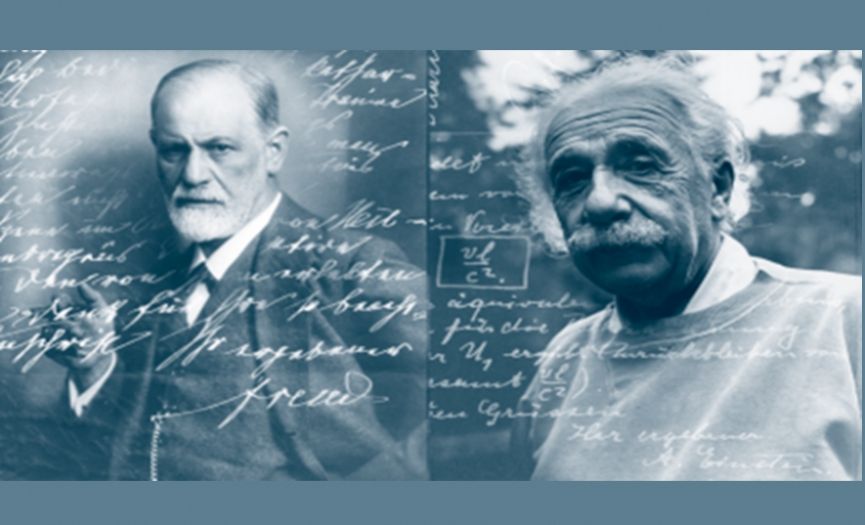 To a mind that has not lived through it, war is a pile of information one would be hard-pressed to remember, yet, to a mind that has lived through the war, it is a harsh truth one would be hard-pressed to forget. Even if the countless novels and movies created around these two profound topics try to bring us closer and make us understand this world, it is not an easy task. In his famous novel "War and Peace", Tolstoy indicates that those who have not smelt gunpowder do not know the true meaning of triumph. During these days of peace in the Middle East, it seems appropriate to look over the letters between Albert Einstein and Sigmund Freud discussing such concepts.

Einstein is the one who starts this string of letters, which were later published under the name "Why War?". On the 30th of July 1932, in the town Caputh near Postdam, Einstein wrote in his first letter that his accustomed way of thinking objectively about the universe is not enough to understand the dark vestibules of humankind's will and psyche. While directing a few questions to Freud, Einstein explains his thoughts in this way:

"The craving for power which characterizes the governing class in every nation is hostile to any limitation of the national sovereignty. This political power hunger is often supported by another group's activities, whose aspirations are on purely mercenary, economic lines. I have especially in mind that small but determined groups, active in every nation, composed of individuals who, indifferent to social considerations and restraints, regard warfare, the manufacture and sale of arms, simply as an occasion to advance their personal interests and enlarge their personal authority. (…) How is it that these devices succeed so well in rousing men to such wild enthusiasm, even to sacrifice their lives?"

Freud replies to this letter from Einstein filled with questions about war, in September 1932 from Vienna. Even though his letter starts with a cheery disposition stemming from his pleasure of corresponding on this topic, Freud's tone takes a pessimistic turn shortly after. By saying: "I expected you to choose a problem lying on the borderland of the knowable, as it stands today, a theme which each of us, physicist and psychologist, might approach from his own angle, to meet at last on common ground, though setting out from different premises.", he notes his initial thought about being incompetent in answering these questions, and his following realization that Einstein is asking these questions not as a scientist, but as a fellow human being. While tackling the relationship Einstein has established between might and right, Freud instead decidedly substitutes the term might with violence and states his thoughts on evolutionary violence as: "Conflicts of interest between man and man are resolved, in principle, by the recourse to violence. It is the same in the animal kingdom, from which man cannot claim the exclusion." While highlighting how the concepts of sovereignty and violence have evolved intertwined, he dictates the mightiest as the most susceptible to violence. Moreover, he expresses that the violence enforced during the war being communal and not directed to the individual leads to no difference. Freud also proclaims the necessities of preventing war as; the relationship between might and violence being broken, and communities of equally rightful individuals being established. However, right after this declaration, he points out the sheer impossibility of his own theory by saying: "But such a combination is only theoretically possible; in practice, the situation is always complicated by the fact that, from the outset, the group includes elements of unequal power, men and women, elders and children, and, very soon, as a result of war and conquest, victors and the vanquished--i.e., masters and slaves--as well." In response to this, Einstein writes a reply that really shows his colors. His reply is more of a wish than an observation. I would like to leave you with this wish that I wholeheartedly agree with:

"I am willing to fight for peace. Nothing will end war unless the people themselves refuse to go to war. (…) Is it not better for a man to die for a cause in which he believes, such as peace, than to suffer for a cause in which he does not believe, such as war? (…) Our school books glorify war and conceal its horrors then indoctrinate children with hatred. I would teach peace rather than war, love rather than hate."