Nazi Flag and Photo of Hitler at a Flea Market 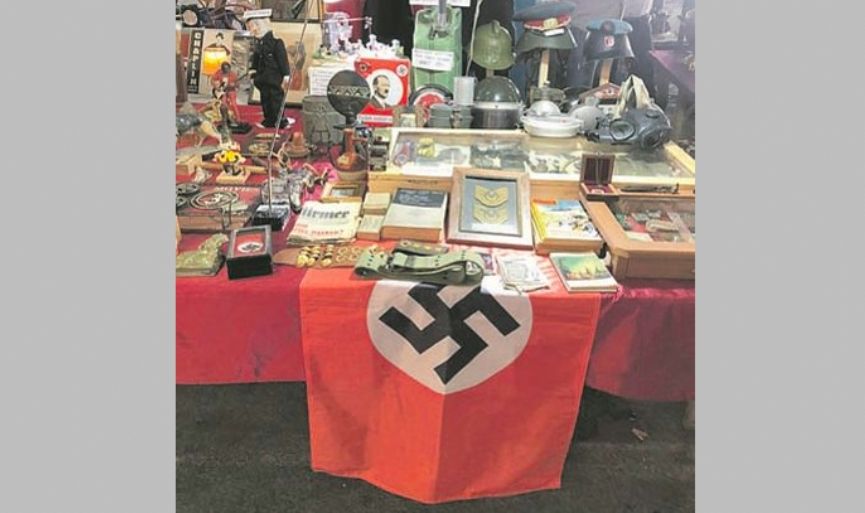 Two weeks ago Sunday, while I was getting ready to take a tour of Galata district, one of the writers from our newspaper told me that while she was doing the same tour, she stopped to browse around Ferikoy Flea Market and she saw that a Nazi flag and a photo of Hitler was on sale on one of the stalls. She got so mad that she backed out from buying a bar-mitzvah armband which she saw earlier and planned to buy.

I did a little digging during the week and found out that selling Nazi flags and photos of Hitler was not banned in our country, just like it is not forbidden to distribute and sell Hitler’s “Mein Kampf” book in Turkish which is published by 20 different publishing houses in Turkey.

Last Sunday, after a short walk and a breakfast, I told my wife, “Let’s go to Ferikoy Flea Market” and so we went.  We wandered around the whole market, but I couldn’t find the stall that my friend mentioned. Just as we were leaving, I decided to show one of the photos my friend sent me to a stall owner on our way out. He pointed at the only stall at the exit hall which we haven’t seen. By the way, we had seen at least 300 stalls.

When we found the stall, the vendor told us that we couldn’t take any pictures since he was selling military equipment.  I mentioned the Nazi flag he was selling.  He said, “There is no reason why we shouldn’t sell this material. If there was a problem, the police would have come and warned us”. On an American fuel can, there was an inscription: “The items sold here are not intended for propaganda. They are only sold for collection purposes.” I assumed this note was inscribed after several warnings.

Meanwhile, the blue and white bar-mitzvah armband had been sold. Otherwise, it would have been added to the Museum Collection.