We are happy with the government, we do not welcome diversity

The results of the survey Social and Political Trends in Turkey-2017 conducted by Kadir Has University were released. The study reveals public perceptions regarding politics, economy and foreign policies. The study also lists socio-cultural priorities.
Karel VALANSİ
SHARE ON TWITTER SHARE ON FACEBOOK 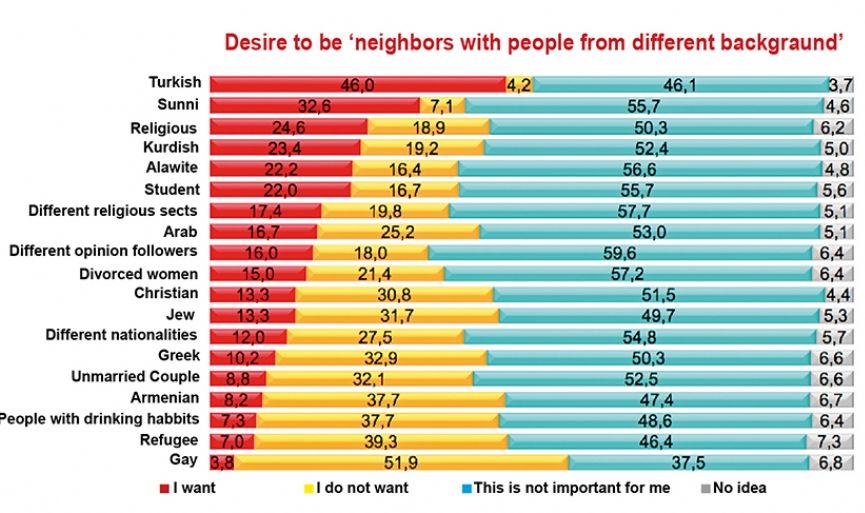 The results of the survey “Social and Political Trends in Turkey” conducted by Kadir Has University Center for Turkish Studies were released. This survey, which also serves as a mirror into Turkey, shows the public’s approach towards current issues including politics, economy, Kurdish issue and terrorism as well as revealing socio-cultural habits. The survey was conducted between December 11, 2017 and January 7, 2018 through face to face interviews with 1,000 respondents, aged 18 and above, residing in the city centers of 26 cities.  When reading the results about foreign policy, it is especially important to keep in mind that this survey was conducted right before Operation Olive Branch started.

>> The most important problem is terrorism, economy comes third

According to the respondents, fighting terrorism and FETO are the most critical problems on Turkey’s agenda. Economic issues come next. There is a significant change in this year’s results compared to previous years, since in previous years economic issues were ranked top. When we look at other issues in the ranking, rights and freedoms (3.9 %) and Kurdish issue (3.5%) complete the list. When asked what the most effective solution for fighting terrorism is, the respondents’ answers were similar to recent year’s survey: military and political methods. Support for cultural and social policies based on dialogue fell by half. The respondents find the government’s performance in combatting PKK, FETO and ISIS, successful.

>> Government’s report card on its foreign policy performance is good

Respondents believe that the government is successful in foreign policy. There is a significant increase compared to last year’s survey: 2016- 35.2%, 2017- 45.9%. Also 38.5 % of respondents believe that the Syria policy adopted by the government is successful. However, when based on political affiliation, the results vary. While among all respondents 63.6 % of AKP voters find the government’s Syria policy ‘definitely successful’ and ‘successful’, only 20.2 % of CHP voters and 16.7 % of MHP voters find the government’s Syria policy successful. The sense of belonging and affiliation played a significant role especially among AKP voters, throughout the questions.  Support for cross-border operations (56.4 %) and military presence (48.5%) in foreign countries has increased compared to last year.

>> Azerbaijan is a friend, USA and Israel are foes

Even though we are going through a period where there are some who think Turkey should leave NATO, the public’s faith and support for NATO continues. However, even though 59.2 % of the respondents stated that NATO membership should continue, 39.8 % of respondents stated that they believe Turkey is capable of ensuring its own security without NATO’s support.  Similarly, despite recent crisis between EU and Turkey, support for Turkey’s EU membership increased to 57.8 %.      43.6% of respondents stated that Turkey should continue negotiations with EU. Also, 38.5% of respondents stated that they think it is possible for Turkey to be a member of the EU. This is an increase compared to recent years. Even though these results might be surprising considering the recent tensions, we might say that these results are in direct correlation with the government’s positive statements. We might also say for certain that regardless of everything, EU maintains its role as an ideal for the country. On the other hand, the fact that USA is perceived as a threat and Russia is perceived a closer ally than Western Countries makes you question which criteria these answers were based on.

43.5 % of respondents find the government’s Kurdish policies successful. Majority of respondents (57.7%) do not think the resolution process should be restarted. 48.4% of respondents with Kurdish origin demand for a more democratic Turkey and 33.9 % see unemployment as the main issue. Respondents were asked which party they voted for in 2015 elections. Even though responses almost reflect the election results, it is seen that respondents who voted for HDP tended to hide it. While the number of respondents who responded to the question “How would you define your ethnicity?” as “Turkish” increased compared to recent years, the significant decrease in respondents who defined their ethnicity as “Kurdish” was striking.

>> The most important problem in economy is unemployment

In general, respondents admit there is a political polarization in the country. They believe that just like in the past, this polarization is between secular and religious segments. Support for the declaration of the state of emergency after the events of July 15th, 2016 is 58.5%. Extension of state of emergency is primarily supported by respondents who have affiliation with AKP. (61.7%). Despite these results, almost half of respondents believe that conditions entailed by state of emergency harm democratic rights (46.7%). The percentage of those who believe judiciary in Turkey has become politicized is still high (50.6%), however it is lower than recent years.

According to respondents, most reliable institutions are police, gendarmery, and army. Media is one of the least reliable institutions (35%). The most prestigious jobs according to respondents are medical doctors, judges, lawyers and college professors. Journalists are among the least prestigious jobs with 1% indicating the current perception of media.

According to the survey, without a doubt Recep Tayyip Erdogan is the most supported (49.7%) and admired (56.4%) political leader. On the other hand, it is believed that there is a political void in Turkey and IYI Party, the recently founded party that has drawn reaction with its anti-Semitic statements, can fill this void. (45.6%). According to respondent’s answers, it seems that Meral Aksener’s IYI Party is most likely to get votes from MHP voters.

>> A conservative and religious Turkey

>> We are neither reading books, nor going to theaters