A Journey with 1,300 people from Turkey to Jewish Culture 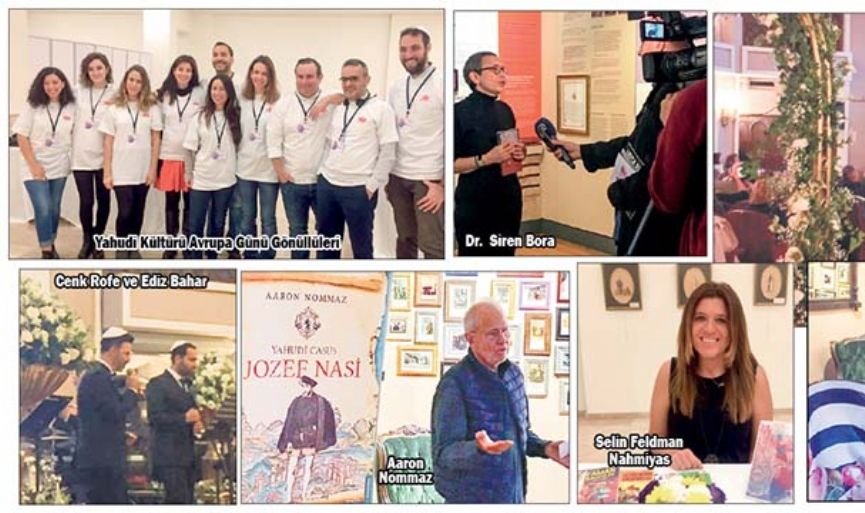 Guests had the opportunity to attend book launches and book signings of various writers.

One of those writers was Dr. Siren Boran. Dr. Siren Boran is one of the first names that comes to mind when it comes to Jews of Izmir and Aegean Region. At the event Dr. Boran promoted her latest book, ‘Anatolian Jews / The Jewish Traces in Aegean Region’ published by Gozlem Publishing House. Speaking at the event, Dr. Boran gave information about the Anatolian Jews whose history goes back 2,600 years. Dr. Boran verified her finding regarding Anatolian Jews’ historical roots with solid documents. Having reviewed archeological findings from excavations in Western Anatolia, Dr. Boran said that the Jewish presence in Western Anatolia goes back to 6th century BC.

The visitors also had the chance to chat with writers Selin Feldman Nahmiyas, Ester Almelek and Idil Hazan Kohen and had their books signed.

Izel Rozental, one of Salom newspaper’s caricaturist gave a speech with the title ‘I’m a Turk, I’m a Jew, I’m a Caricaturist’. Rozental later signed his books for the visitors. Rozental’s exhibition displaying caricatures published at Salom was flooded by visitors.

The visitors also had the chance to attend special Galata Tours organized by the Museum. The tour took them on a nostalgic journey in 1930’s Galata. Accompanied by professional tour guides, they had the chance to rediscover Galata’s old neighborhoods where in the past most of their residents were members of Jewish community.

The all-day long “Come, Let’s Meet” live event was flooded by visitors who wanted to get to know Turkish Jews better, find answers to their questions and talk with a Turkish Jew. The event that consisted of 30-minute long chat sessions each hosted nearly 100 visitors.  After the sessions, the feedback from visitors proved that their prejudice regarding Jews have been overcome after these talks and that a new window for dialogue has opened.

The Synagogue itself hosted various interesting presentations and speeches by guest speakers and live music performances. Karen Gerson, Director of Ottoman Turkish Sephardic Culture Research Center, gave a speech about Sephardic Music and performed ‘Estambol mi Amor’, a song in Judeo-Espanyol from her latest album. Gerson’s speech was followed by a music performance by Yako Taragano and Sephardic Hymns Choir. The audience was especially moved by the use of musical notes from Turkish Classical Music. Cenk Rofe and Ediz Bahar mesmerized their audience with their music performance ‘From Pop Music to Musicals, From Musicals to Classics’. Izzet Bana and young soloists from Estreyikas d’Estambol accompanied Rofe and Bahar during their performance.

One of the hit events of European Day of Jewish Culture, as every year, was the theatrical representation of a traditional Jewish wedding. This year, the audience had the chance to watch and be a part of a traditional Ashkenazi wedding and its rituals. Rabbi Mendy Chitrik, before performing the theatrical wedding ceremony, gave information about the rituals. In a community whose majority of its members are Sephardic Jews, for Sephardic Jews audience the theatrical representation of an Ashkenazi wedding was as interesting as it was for non-Jews. At the end of the ceremony, the family of the bride and groom did the hora dance to share their joy and the audience accompanied them with their applause. Following the wedding, 150 dancers consisting of Semes Karmiel Dance Group members and Alef Youth Center members gave a folk-dance performance. The performance that included children as well was especially moving since some of the children had the chance to dance with their own parents.

European Day of Jewish Culture event in Istanbul was followed and covered by both national and international media. The organization team of the event happy after a long and joyous day, will start preparations for next year’s event, following a short break.