On Sunday, the head of the Turkish Jewish Community İshak İbraihmzadeh was working as a salesclerk at the Kelebek Korse store in Beyoğlu. İbrahimzadehs shift behind the counter was not to represent the community, it was a decision he personally made.
Riva HAYİM
SHARE ON TWITTER SHARE ON FACEBOOK 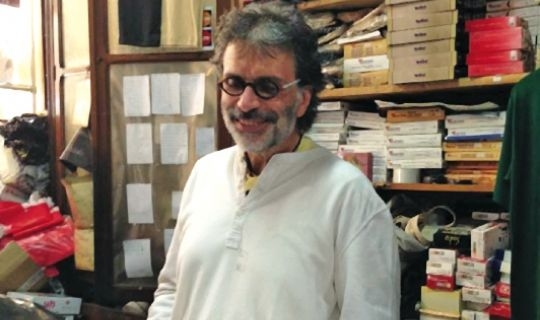 Many people will probably have read about it; many interviews have been made about Kelebek Korse. It was a situation that was featured in newspapers for some time. In summary, along with the “10 year law” the tradesmen are slowly leaving Beyoğlu. In the situation of İlya Avramoğlu, the owner of Kelebek Korse, the rent that was 3000 TL has now become 30 thousand TL with this law.

In short, according to the law, the owner of the property is the owner of the right. Therefore, the property owner can rent out the property to whomever they wish and if they wish can charge their tenant 10 times the rent. They do not even have to deal with the tenant during this period. This is because there is an applicable law. They do not have to be merciful. The other side is also representing another minority.  Furthermore, the chain store next door is paying rent at an unknown higher rate. I don't even think that there are tradesmen who can face such levels of rent. The law is clear.

Of course, there is also this point to consider; is every legal decision just? There is no such necessity in any case. I had many questions regarding this subject. As I was going to Kelebek Korse I asked myself many questions: “What would have happened had I been a charity and the owner of that property? How would I have acted had I not been a charity, and had been the owner of the same property as an individual? What are the differences between charities and individuals, what are their aims? What I would be feeling right now if I had been a tradesman trying to survive while paying rent for that property? Would a charity victimize others in order to provide help to the victims it was formed to protect? Putting it all aside for a moment, had a Jewish or Muslim clergyman been featured in the news, what would the reactions be?” When I walked into the store, I was asking myself the same questions and evaluating them from both points of view. I looked up to see our head of community İbrahimzadeh standing behind the counter with his positive energy, trying to sell corsets to the people in the store: “Look there are now corsets for men too. You wear it under your t-shirt and you have the sportiest body on the beach.” The store was also very crowded. It was a day in which everyone in the congregation came to the tiny store in support for İlya. There were people in store who were laughing, who were greeting each other with hugs and there were also those who were getting upset. I had never before witnessed a tradesman preparing to say farewell to his place of work of 80 years.

To try to disperse the melancholy in the store, I asked İlya for a product. As someone was fetching the product I asked for from the shelf, İlya was politely recounting the events of 6-7 September to Jaki, the son of Şalom writer Karel Valansi: “Look, this hole happened during the events of 6-7 September. News was spread that Atatürk’s house was bombed. They accused all of us. There was a newspaper which wrote bad things. Those who read this newspaper, who believed in these reporting, broke the door of the store and came inside, they trashed the store, they took everything we had. They broke everything. There used to be seamstress girls upstairs who sewed corsets, they took our fabrics and our sewing machines. Those times were bad times. When an Armenian friend of mine comes over, we sit opposite each other, look at the hole in the wall and still talk of those bad memories. Let us hope that something like this never again happens. You may touch the wall Jaki…” I had unfortunately learned of the events of 6-7 September quite late. Jaki, on the other hand, was luckier than I had been. Even as he listened to the events told by İlya, Jaki could not separate his eyes from the mark in the wall. I also stared at length at the hole. Where was the person who had caused that damage now? Was he upset at what he had done? Or, I do not even know…

As I listened to İlya, I thought to myself of another question: Has the incoming tenant paid as high a price for the hole in the wall as İlya? Because if he hasn’t, 30 thousand a month is not even close.

I had still not been able to pick my side in this situation, until the moment that I heard that the two sides had not even sat across the table from each other to negotiate. Yes, you did not misread me. Despite all the news, all of the hardships, the two sides did not sit together to talk. Instead, both sides made hurtful comments. Doors were shut on faces.

When even two lovers in the process of splitting up can come together civilly to talk, my verdict regarding the state that this situation had reached, was: It was a process that had been very poorly managed.

Regardless of how the situation is to be resolved, I hope that both sides come together to talk and work out their disappointments with each other.

If the process is run in this way, I would like to state – with love and respect to the property owner who is in the “legal right” – that my side is clear. I will go behind the counter in support for İlya and make my sale; that is, until the moment that I am removed from the premises.