Before its opening - Edirne Synagogue in 10 questions; Its history, importance, congregation, Najara and Maftirim

Edirne, a city famous for its mosques, historic Islamic-Ottoman social complexes, bazaars, caravanserai and churches and one of the towns that the Ottoman Empire left the most historic monuments per metre square, will have a synagogue added to its historic mosaic of memory. For those who are curious a brief summary prepared to the best of my abilities from valuable resources:
Riva HAYİM
SHARE ON TWITTER SHARE ON FACEBOOK 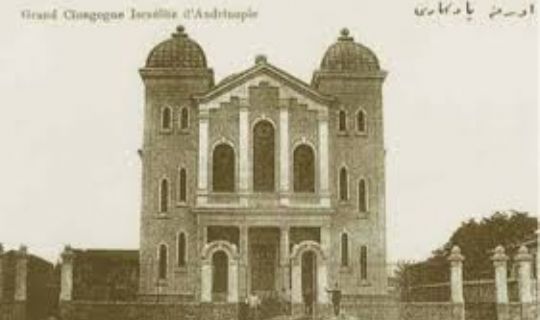 1-Why is the opening of Edirne Synagogue so important?

Edirne Synagogue has been a symbol of the freedom of worship and religion for the Jews ever since the period of the Ottoman Empire and is one of the largest synagogues in Europe. It was opened to worship in 1907 with the name Kal Kadoş ha Gadol (Sacred Large Synagogue) (Another large synagogue is Sardes in the county Manisa dates from 133 BC.)

Edirne Synagogue is not only the birth place of freedom of religion in the Ottoman period, it is also the birth place of Maftirim (synagogue hymns) the fruit of the forgotten strong connections between Ottoman Sufism and Judaism.

This symbol was left on its own in a dilapidated state after the Edirne congregation left their home after the Thrace Incidents in 1934.

2- In brief, what are the Thrace Incidents?

In the ‘Thrace Incidents’ of 1934, as a result of the rising wave of anti-Semitism in Turkey and Europe, in cities such as Tekirdag, Edirne, Kirklareli and Canakkale businesses and homes belonging to Jews were attacked and looted and minorities were subjected to physical assaults. As a result of these incidents, the congregation in Edirne emigrated from their homes and the Edirne Synagogue – that had witnessed history and culture – was left behind alone and dilapidated.

3- How old of a synagogue is the Edirne Synagogue?

Jews started settling in Edirne following the conquest of Edirne by Sultan Murat I. The congregation numbered approximately 17 thousand and had 13 synagogues. Unfortunately, as a result of Harik-I Kebir (large fire) thousands of homes burnt down and all of the synagogues were destroyed. Following the fire, the Jews in Edirne no longer had places of worship.

4- How old is the Edirne congregation?

Following the Ottoman conquest of Edirne, the Sultan Murat I invited the Romaniote Jewish congregation (The Jews of Rome) who had been living in Anatolia since the time of the Romans, to settle in Edirne. The Sephardic Jews (Jews who had immigrated to Spain) who had been expelled from Spain in 1492 and who had come to Ottoman lands in a large wave of immigration also settled in Edirne. In short, Edirne became a valuable Ottoman town in which different cultures came together and different languages were spoken.

Even though it was constructed in the 20th century, the Edirne Synagogue represents the history, past and common culture of the Ottomans and Jews. Additionally, the synagogue is a combination and embodiment of the culture of the 13 synagogues belonging to the Romaniote and the Sephardic Jews that did not make it to our day due to the large fire.

5-What is the relationship between the Edirne Synagogue and the palace court?

Along with the musicians from the other religious minorities in the Ottoman Empire, the Jewish musicians were also brought up in the palace in order to perform to aristocrats who were not Jewish.

The central role played by the music of the hymns and the holy poetry within Jewish religious celebrations shows similarities at times with the Sema of the Sufis.

Maftirim, is the name given to the synagogue hymns of the Ottoman Jews. They are not prayers. These hymns are unique to Sephardic Jews and were created in these lands. As stated by Karen Gerson, the Coordinator of the Research Centre for Ottoman –Turkish Sephardic Culture: “Maftirim is actually the expression of any feeling and thought such as the praise, thanks and reproach of God in the intonation of Turkish music. In essence, the names given to these poems were in time give to the groups who recited them.”

Nowadays, these hymns are still expressed in intonation with Turkish music. Below is a link for you to experience it:https://www.youtube.com/watch?v=gqPmp0PuKXo

Sadly, many pieces that were composed with classic Ottoman music from the 16th century to the beginning of the 20th century remained unpublished until the 20th century and only very few of these hymns lasted to our times by the means of oral tradition.

As documents predating the 16th century do not really exist anymore, it is known that the first official source of Ottoman Jewish tradition was Rabbi Najara (1555- 1625).

In the beginning of the 17th century when Najara was alive, Jewish musicians became important people associated to court music.

In Istanbul in 1614, the traveller Pietro della Valle, described the reception held for the new Venetian ambassador Alomoro Nani as:

“After the meal, they left the palace for an hour or two to watch the Jewish musicians who were all dancing, singing and playing instruments in the Turkish style.”

8- Hymns that spread from Edirne to the world…

At the beginning of the 17th century, Edirne became the centre of Ottoman-Jewish hymns. Hymns that were written in Edirne spread to Bulgaria, Bosnia, Venice and even Egypt.

9- Who did the Ottoman Jewish musicians perform to?

Ottoman Jewish musicians have a dual cultural identity: they serve both the Jewish community and audiences who were not Jewish.

10- Will the Edirne Maftirim tradition survive?

The 300 year old Maftirim tradition last flourished in the 1920’s. At first, Jewish immigrants from Edirne gathered in a private residence in Sirkeci. In the years of 1926 they tried to keep this tradition alive under the leadership of Rabbi Behor Papo in the Kneset Israel Synagogue in Sishane.